CF Málaga have been the worst non-Osasuna team in La Liga in the last six matches, with a 2-1 win over Las Palmas and the goalless draw against Leganes the only source of points. That’s certainly puzzling for a team whose shot metrics and advanced stats are all slightly positive on the season, yet they are on just 27 points with a -12 goal difference. So why aren’t they better?

One potential answer revolves around leading scorer and ex-Barcelona forward Sandro Ramirez, who scored seven goals in the fall. He has sadly suffered a hamstring injury in the 2-0 loss to Sociedad and missed nearly two months. On top of that hamstring being the one he injured in the spring of 2016 for Barcelona, Sandro is now reportedly suffering from the same problems and had to skip the U21 national team’s games for Albert Celades’ team, per the team’s website. Aside from his goalscoring he is also an excellent long-range and volume shooter who can hold on to the ball and a quick look at this radar chart shows a breakout season: 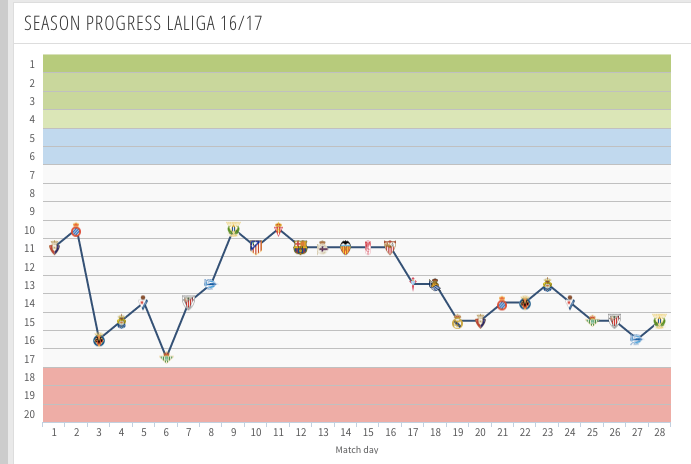 It is thus no surprise that the Albicelestes are now on their third coach of the season: former Real Madrid and Sevilla manager Juande Ramos didn’t make it to 2017. The Madrid connection did not stop there: former player and Ramos assistant Marcelo Romero was sacked earlier in March and Real legend Michel has taken over in a desperate attempt to stop a slide that included just one win and seven losses from ten games.

Three matches in eight days, a trip to Sporting Gijón sandwiched between visits from Atletico and Barca will be a huge test to see if Michel’s 4-4-2 system can get results. With matches against three other members of the top six (Real, Sevilla at home, Sociedad away), it’s not inconceivable that Malaga go down, though the excellent GoalImpact model gives that just a 13% probability. Still, stranger things have been known to happen and one win since late November doesn’t exactly exude confidence.

LaLiga. Much more disparity between the teams than elsewhere. //@utility73 pic.twitter.com/ekG8AgfWuJ

Unless you’ve been living under a rock, you’ve heard that Valencia, the fourth most valuable squad in La Liga, have in recent years enjoyed their share of selling players and switching managers. Since the appointment of Claudio Ranieri signalled the end of the Rafa Benitez era in 2004, Los Che have made a stunning 18 managerial changes, with Salvador Gonzalez, better known as Voro assuming the caretaker four times, the latest on December 30th, after Cesare Prandelli left. In addition, here are the players they have sold just in the last FOUR years!

Apparently, the fourth time is the charm in Valencia, as Voro has been a stabilising influence on a side that had gathered just 12 points from the first 15 matches. 18 points from 13 isn’t exactly setting the world on fire, but aside from the top four, no other team has really stood out in that time span, and I’d assume Valencia are okay with moving out of the relegation zone into the
realm of mediocrity. 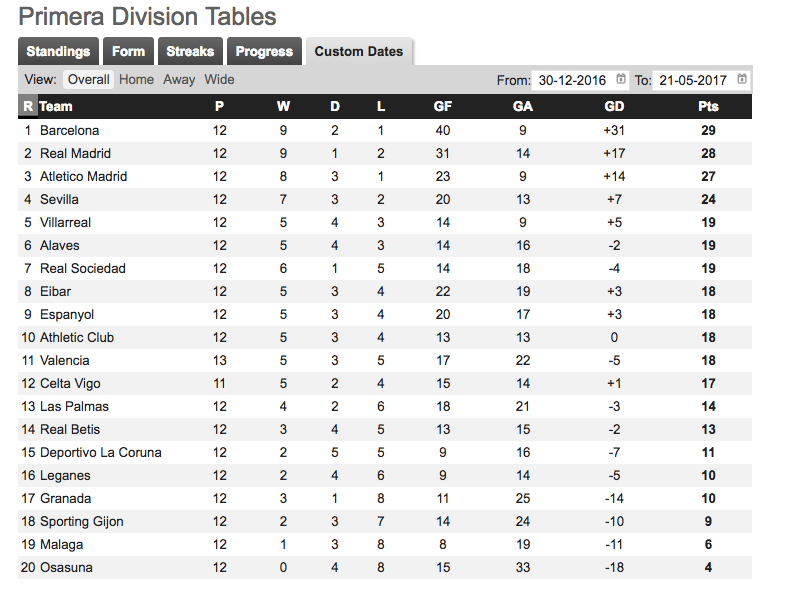 Make no mistake, this team still has not been higher than 13th on the table despite already using 30 players on the season! But at last Voro has installed a stable lineup that runs out in either a 4-2-3-1 or a 4-3-3 with Diego Alves in goal and a backline of left back Gaya and RB Cancelo (who is sometimes capable of playing as a right wing like against Barca, where Martin Montoya filled in) as fullbacks with Mangala and Garay as two rugged CBs. Enzo Perez and Dani Parejo play the double pivot, with Soler, or Mario Suarez occasionally turning into the third midfielder in the 4-3-3. The attack features three of the Nani, Orellana, Munir and Zaza quartet, with the Portuguese the leading assist man with six and the former Barca striker the leading scorer with five goals.

Sitting on 30 points may not seem like much but Valencia have a roughly one percent shot at getting relegated, which is the same as making it to seventh, so it looks as if they’re just going to be playing out the string in what amounts to a lost season.

13. Betis Are Real Betis the least interesting one man team in La Liga?

Ruben Castro is BETIS! The 35-year-old striker who took a rocky road from Las Palmas has played 271 games for Betis and has scored 143 goals in all competitions since his move from Depor in the summer of 2010. At this point, if Castro stayed healthy and played around 3000 minutes you could pencil him in for 16+ goals a season (and more in the Segunda where he has scored 59 in 84 for Betis) in the mortal tier of Spanish top flight strikers alongside Aduriz, Lucas Perez, Borja Baston or lately Iago Aspas. This season, Castro has scored nine of his team’s 31 goals for a 29% contribution despite attempting a career-high four shots per 90 minutes. His conversion rate is 14% which when you compare it to his previous few seasons ranging between 16 and 27% which explains the slight drop.The other contributing factor is shots blocked, as Castro has seen a career high 29 efforts thwarted by defenders, resulting in a career-low 32 shots ending up on target. 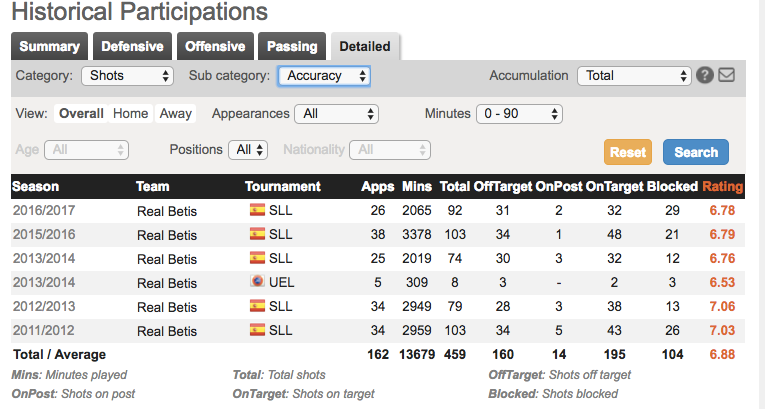 That explains a lot, but fingers could also be pointed at his supporting cast: Joaquin is somehow the top assist man, despite being 35-years-old and having 1100 minutes to his name and left back Riza Durmisi is the only constant in the key pass department, with the Danish player averaging a strong 1.6 per game a mark that is good enough for him to be the only Betis player in the top 50 in La Liga. The disparity between Castro and his teammates is even worse when it comes to shots: the veteran striker takes nearly triple the amount of his closest teammate, Antonio Sanabria, who has four goals on 33 attempts. Sure, some of that is aided by Castro attempting 17 set piece shots, but the ratio remains the same 3 to 1 on open play efforts, 73 to 25 and 24 respectively.

The former Roma and Gijón striker (11 goals last year!!) Sanabria’s case is curious, he after all takes 80% of his shots from inside the box while the other goalscoring threat Alex Alegria, who is third on the team with three goals, takes 70% of this shots from inside the box. In stark contrast, Castro’s output is much superior, despite just 64% of his shots coming from inside the box, which means that he is scoring more from more difficult positions! The reason for that is Sanabria’s struggles with accuracy: nearly half his attempts miss the target and only 27% make it on goal, probably owing to the fact that 30% of his total shot attempts are headers, which are really not efficient.

At least Alegria gets almost half his shots on net and despite being the most physically imposing of the Betis strikers has attempted just six headers on his 29 total shots.

They will have a chance to improve on those numbers in two of the next three matches, as both Espanyol and Las Palmas feature below average defensive units when it comes to shots per goals conceded, but Villarreal opponents need 17 shots on average to create a goal, which is double the league average, so I wouldn’t expect much there.

12. Have Las Palmas been found out?

It seems like ten years ago, but UD Las Palmas were actually on top of the table after thrashing Valencia and Granada with a combined goal difference of nine to two! Quique Setien’s side have come back down to Earth since then: a 5-1 loss to Sociedad has kick-started a decline that has them grabbing 26 points from 24 games with 33 goals for and 40 conceded, nearly identical to Betis and behind Valencia! Apparently, needing 2.33 shots for a goal to be scored is unsustainable or something and a 19.5% expected goal per shot mark isn’t going to last a whole season….

Just for comparison UDLP now need 7.93 shots for a goal and the EXPG\Shot mark is 9.2%. It’s not as if Las Palmas were taking a tonne of shots either, as shots per game have remained around eleven for the whole year, it’s basically just the early flukey finishing regressing to the mean.

The other notable aspect is the chasm between Los Amarillos at home and away from the Canary Islands: in 15 home matches, they’ve bagged 29 points on a superb 27-14 goal difference. Their away form has been nothing short of a disaster, with just six points all year (tied for Osasuna for the second worst mark in La Liga) and a 17-31 goal difference.

That’s a borderline shame for a club that has captured the heart of many fans with their delicate possession based football (57% trails only Barca, after settling for third behind Real last year!!!) and features a roster full of talented players from the talented CB pairing of Pedro Bigas (top 10 in the league in interceptions after number one last year!) and Mauricio “score like Sergio Ramos” Lemos in the back. The real gem of the squad is found in the midfield in Roque Mesa, who is only behind Samuel Umtiti and Toni Kroos in pass completion at 92% and Jonathan Viera who in addition to having six goals and seven assists is tied for the league lead with Neymar at 72 total key passes! The Kevin-Prince Boating comeback tour has been a roaring success (eight goals, 2.8 shots per game) and the club has also invested in the future with bringing back two marquee talents in Jese (PSG\Real Madrid) and Alen Halilovic (HSV\Barcelona) in search of playing time. It seems as if UDLP are all set up for success with an excellent coach in Setien, but sadly there are strong indications that Setien will be moving on due to irreconcilable differences and the future in Gran Canaria appears certainly less sunny than it was in early September.

Celta Vigo are in many aspects the polar opposites to Las Palmas: their season started out disastrously by losing their first three games (Leganes, Real and Atletico) and a match day five win lifted them out of the relegation zone. Since then Celticos have racked up 37 points from 23 matches and if their makeup game vs Real Madrid ever gets a scheduled date (and they win it) the team from Balaidos could jump from ninth on that table to sixth behind the top four and Villarreal! How have they done it?

Well, the answer is two words: Iago Aspas! The striker who famously got just 378 minutes for Liverpool’s epic 2013\14 team – what a case of wrong place at the wrong time, just imagine trying to break into the 100 goal LFC team that year! – is enjoying a career year with 15 goals already in La Liga. He also has contributed four in eight in the Europe League where Celta are playing Genk in the quarterfinals on April 13th and 20th. There are a tonne of similarities (shots per game, etc) between his current and last season, but Aspas has made a notable improvement in his accuracy: 33% of his shots go off target compared to 44% last year. He is also taking on more responsibilities as a dribbler (up to 1.2 from 0.8 per game) and has doubled the number of times he gets fouled (2.2 to 1 a game), which is massive for a team that has lost its most creative attacker in Nolito who is now mostly not playing for Pep Guardiola at Manchester City. Let’s hope that Aspas, who has since made his national team debut after torching the league in October and exacted his revenge on England will stick around!