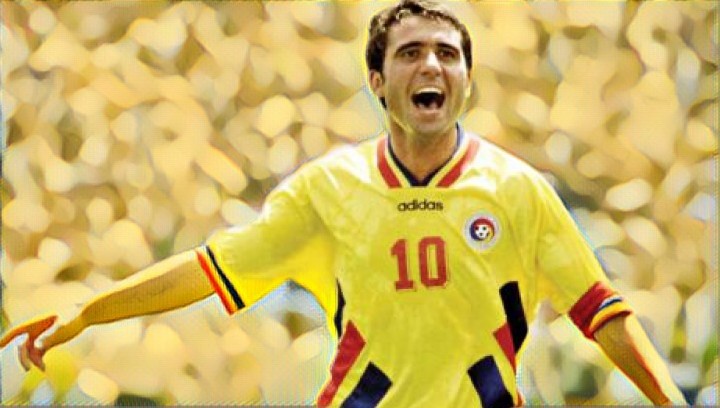 As Thomas Ravelli ran, fist pumping the air, away from the swarm of his victorious teammates, their Romanian counterparts fell to the ground beneath the punishing San Francisco sun. The team that had grown together from the late eighties and suffered penalty heartache in World Cup Italia 90, failed again, this time against ten men in the dreaded shootout. This was the pinnacle of Romania’s Golden Generation, born in times of austerity, rationing, and control of the Nicolae Ceausescu communist regime. By 1994 the country was in political flux as the democratic parties fought to take control.

At the head of this team was the so-called Maradona of the Carpathians, Gheorghe Hagi. The goals, drive, and vision from the talisman and captain had taken Romania to the quarter-finals, defeating South American giants Colombia and Argentina along the way. The vital cog in the free flowing expansive football that Romania played that summer found himself named in the World Cup All-Star Team.

In 1987, Hagi was poached by Steaua Bucharest following 58 goals in 108 appearances over four years for Sportul Studentesc. Steaua, the state-backed club, initially brought him in for a one-off appearance in the European Super Cup, but as time went on it was clear he would not be returning, much to Sportul’s chagrin. Hagi spent the next three years with the Red And Blues winning three titles and as many Romanian Cups. Offers flooded in for the 24-year-old with Bayern Munich, Juventus, and AC Milan all having bids rebuffed. This was symbolic of the control the communist government held over the country, although Ceausescu’s regime came to a bloody end in 1989.

Fresh from his first World Cup appearance in Italy the following summer, Hagi finally got his move away, completing a transfer to Real Madrid. After two years in the Spanish capital, Hagi had played for four managers but had only one Spanish Super Cup to show for it. Amidst rumours of unrest amongst the squad, the often disgruntled Hagi was looking for a way out. The unlikely escape route came by the way of little known Brescia of Italy’s thriving Serie A.

Manager and fellow Romanian Mircea Lucescu saw Hagi as the missing piece of his puzzle and wanted him to form a triumvirate of Romanians alongside Florin Raducioiu and Ioan Sabau. Seeing the fervour with which Biancoazzuro president Luigi Corioni wanted him, Hagi demanded that his Madrid wages were matched.  Corioni acquiesced and the deal to bring another world star to the Serie A ranks was complete.

An inauspicious start to his career in Italy saw the volatile midfield playmaker being red carded on his debut, and with a side struggling to score goals, the inevitable slide down the table began. His five goals were not enough to keep Brescia out of a relegation play-off with Udinese. A 3-1 defeat saw a return to Serie B after only one season in the top flight. With the World Cup in the USA fast approaching Hagi decided to stay put in Northern Italy, producing some of his best football in recent times as Brescia returned to Serie A at the first time of asking.

A buoyant Hagi arrived in the States ready to inspire a nation. A goal of the tournament contender against Colombia in the opener was followed by a bump to earth with a resounding defeat to Switzerland in the second group game. A close 1-0 victory against the hosts saw Romania top the group and progress into the knockout stages where Argentina awaited. Comparisons to Maradona had followed the diminutive Romanian throughout his career and with El Diego suspended from the tournament in disgrace, Hagi rose to the occasion, providing an assist for Ilie Dumitrescu and finishing the scoring with a right-footed goal. However, following a draining 120 minutes against Sweden in the quarter-finals, Miodrag Belodedici saw his penalty saved and the Tricolorii were on their way home.

Johan Cruyff and his Barcelona Dream Team came calling and a second chance at success in Spain came with it. It wasn’t to be though as injuries and a drop in form left Hagi making only 36 appearances in his two years, with just another Spanish Super Cup medal to add to his collection. Now aged 31, and with possibly his best years behind him, Hagi was about to embark on the most successful stage of his career since leaving his homeland, as he moved to Turkey to join Istanbul giants Galatasaray. The fervent UltrAslan support immediately took him to their hearts as Gala gobbled up ten trophies in his four years in Turkey’s largest city. These included four league titles and a UEFA Cup in 2000 despite being sent off in the final against Arsenal for striking Tony Adams.

The 35-year-old called time on his playing career as the pull to coach his country proved too much. However, failure to qualify for the 2002 World Cup resulted in the national hero being sacked after only six months in charge. The thing that plagues many great players as they step into management struck again with Hagi as his failure to convey what was required to players and bust-ups with ownership saw him bounce around five clubs over the next ten years with little success to show for it. After being sacked by Galatasaray in 2011 after five months in charge, he stepped away to concentrate on his club and academy he had founded two years previous in his home region of Constanta.

The Gheorghe Hagi Football Academy cost €11m and is seen as one of the most state-of-the-art academies in Europe. Hagi wanted to use the academy to help feed Viitorul (Future) Constanta, the club he founded in 2009. Beginning life in Liga 3 Hagi’s Kids achieved back to back promotions and with it promotion to the top flight. Despite struggling in their maiden season in Liga 1 Viitorul managed to establish themselves, and with the owner at the helm, secured their first European qualification with a fifth place finish in the 2015-16 season.

With a team comprising all but one Romanian national they had certainly caught the attention. Sixteen-year-old captain and son of Gheorghe, Ianis, secured a move to Fiorentina at the season’s end. Despite this, and having only been in existence for eight years, the club from Constanta won the league in May 2017 with a 1-0 victory over 2012 league winners CFR Cluj. A beaming Hagi was hoisted aloft by his players.

Hagi is seen as a key figure in Romanian football, someone who helped take them to the height of world football as a player and maybe through his academy back there again in the not too distant future. For now, though, the Champions League awaits.