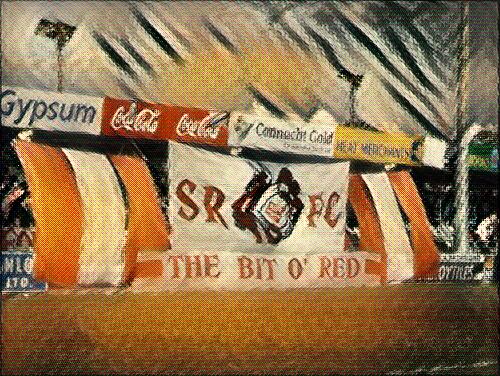 We all have to start somewhere when it comes to writing about our favourite team and for me I think the best place is to go back to start and the beginning of what has been a near 30-year relationship between myself and Sligo Rovers. Rovers or the Bit o’Red as they are known play in the SSE Airtricity League Premier Division which is the top league in the Republic of Ireland, they have also spent time in the First Division and have both sporadic and sustained success whilst flirting with bankruptcy along the way. All of that I will cover in future articles. For me it all started with Jack Charlton, his appointment as manager of Ireland in the 80’s. Until then the Irish football team were always in the periphery behind the indigenous sports such as Gaelic Football and Hurling and also at times rugby. But that changed when Ireland qualified for Euro 88 and the country was gripped by football fever. I was 10 at the time and right age to be captivated by the team’s exploits in Germany, I was hooked and wanted a more regular and live fix than ‘The Big Match’ on a Sunday on ITV.

I started to ask my Dad to take me to Sligo Rovers matches but he wasn’t as hooked as I was but that to in time would change. So finally in 1989 a neighbour took me and his son to Finn Park to see Rovers take on Finn Harps, it was an away game but for me my first time to see my local team in action. They won 1-0, former Northern Ireland international Billy Hamilton scored the goal, I was told he had played in a World Cup, I didn’t need any further endorsement, my love affair had begun. After that my dad would drop me and my brother Shane down at half-time to the home games in the Showgrounds as we could walk in for free and collect us afterwards. It meant we always to ask the score but no one minded. It was a great time to start supporting the club as they entered one of their golden periods. They were relegated in the 1992/93 season. Willie McStay brother of Celtic legend Paul was the manager and the following season he led the team to the First Division Shield, the First Division and promotion and capped it off by winning the FAI Cup on a rainy afternoon in the old Lansdowne Road. Rovers beat Derry City 1-0. McStay went back to Celtic to coach their reserve side and Rovers appointed Lawrie Sanchez. There were European games against Floriana of Malta and FC Brugges of Belgium as Rovers challenged for the league.

Sanchez left after a season to take up a role with Wimbledon but not before he appointed his successor Steve Cotterill who led the cup to a League Cup Final which they lost on penalties and also qualified for the Intertoto Cup. In one of these games Rovers famously led 3-1 with about twenty minutes to go against F.C. Nantes who had a young Lillian Thuram playing for them, they came back to draw 3-3 but still it was like a win! Cotterill went back to England as well but a couple of seasons later former Manchester City player Nicky Reid took over and led the club to their first ever League Cup win. Things took a downturn after that as the club was relegated at the turn of the century. By that time I had gone from being a supporter to a volunteer as I both writing for and helping to sell the match programme. I also had a brief stint as the club’s Commercial Manager, it was my first full time job out of college and it didn’t go well! The club spent five years in the First Division but these were happy ones for me and my family as we all ended up involved. My brother Barry was playing for the first team, my brother Shane for the reserves and my youngest brother for the club’s under-age sides. My Mum was doing the half time hospitality and my Dad was now fully converted as he joined the club’s management committee. I was now editing the programme and also heavily involved with the administration and coaching of club’s under-age sides.

The club won the First Division in 2005 to get back into the Premier Division and have stayed there ever since. In 2007 they appointed Paul Cook as their manager little knowing that the greatest ever period in their history had begun. I was very fortunate to be a part of it as in February 2008 I was appointed the as the club’s promotion officer which was a full time role part funded by the FAI. It was an incredible time to be involved, I was there for five years as that was the length of my career break and during that time the club won the Premier Division, two FAI Cup’s and the League Cup and qualified regularly for European competition. Also in 2012 I was the club’s secretary which worked out well for me despite the extra workload as I received a League winner’s medal. I left in February 2013 as I had a young family to support but stayed involved and currently help out with the programme, the website and social media and am a founder member of the club’s heritage group which recently published an updated club history. So that’s as brief a background as I can give of my love affair with Rovers and I will write more about the club and unique challenges it has faced in coming weeks. Until then, up the Bit o’Red!