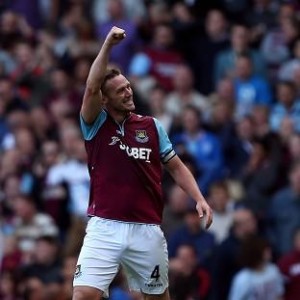 Pete Sixsmith thought for 81+3 minutes that he might be watching a team that had learned at last how to hang on to or, better still, build on a lead. Alas, old habits returned and the Hammers got their deserved equaliser against a Sunderland defence once again playing – or made to play – far too deep …

It was almost a very good day out. Glorious weather, a couple of enjoyable pints in excellent company and the likelihood of hanging on for the first win of the season meant that getting up at 4.45 wasn’t such a bad deal. And then …

Along came Kevin Nolan, who has been a bête noir as far as we are concerned. His hat trick at the SDA was followed by a goal that we just managed to cancel out in the return game. As he departed the Premier League for what looked like a couple of seasons in the Championship, it looked as if we would never see him again.

No such luck. Up he popped, 93 minutes into the game, to score what, in truth, was a deserved West Ham equaliser, turning on the ball and squeezing it past the impressive Simon Mignolet to foil our attempts to pinch a win at the Boleyn Ground.

For much of the game we had defended stoutly and with intense concentration, repelling the aerial bombardment that the Hammers had subjected us to. Bramble and O’Shea were outstanding, and although some of the defending was skin of the teeth stuff, it looked as if we were going to keep a second successive clean sheet in London.

In fact, we could have been two up and sitting comfortably. As West Ham pushed forward, there were gaps to exploit and a good run by McClean led to a low cross that the onrushing David Vaughan was a smidgeon away from turning into the net with a diving header. But he didn’t. And we weren’t. And they came back.

Steven Fletcher (who else) had given us the lead in the ninth minute, when Seb Larsson took advantage of a Nyron type pass by Collins to play the Scots goal machine in. One touch and a shot across Jaaskelainan, and the ball was nestling in the back of the net and we had 78 minutes to hold out.

Mignolet made a cracking save from Mr Bête Noir and in the second half, Big Sam clearly told his team to disregard any forms of subtlety and throw the ball up in the air as high and as often as you could.

We helped the West Ham cause by sitting too deep so that when we did have possession, we usually gave it back to them so they could lob in even more balls into the box.

Fortunately for us, they were lobs and not particularly dangerous crosses, and the fact that Carlton Cole was the target for them helped us considerably. He looked a Championship player throughout and when Andy Carroll is fit it could well be curtains for Carlton.

Had we won, it would have been the classic smash and grab raid, one that had it been perpetrated on us would have lead to vitriolic outbursts from bloggers, condemning the away team and bemoaning our misfortune. When the boot is on the other foot, as I suspect it will be a number of times this season, it may well be wiser to keep schtum and accept the point(s).

There were some very good performances, starting with Mignolet who looks a very good keeper indeed. Danny Rose did well, with one great header foiling an earlier second half equaliser. Gardner turned in another steady performance and one run and cross set up McClean for a chance which he scuffed.

The Tweeting Derryman is still looking a little off the pace. He worked extremely hard, tracking back, coming across into the centre, but the spark from last season has not yet been fully re-ignited. He had an excellent chance in the first half but hurried his shot where an extra five yards going forward might have made all the difference.

The remaining midfield three were hard working and industrious without ever really threatening to open up the Hammers. They were faced with an extra body in midfield and at times looked as if they might be overrun, particularly by the flying wardrobe known as Mohamed Diame.

But they stuck to their task and when Larsson went off to be replaced by David Vaughan, there was a hope that our ball retention might improve. If it did I failed to notice it, although Vaughan was as busy as ever and could have sealed the game for us.

Sess still looks rusty, but there were some signs of improvement. He moved the ball on quicker and chased and harried when he dropped back, but he is rarely seen in the opposition box and he has yet to show that he can link effectively with Fletcher.

As the clock wound down, the gnawing of finger nails continued, but when Fraizer Campbell limped off to be replaced by David Meyler with seconds remaining, there was hope that we might close it out. Alas no. Jarvis chased a loose ball, Meyler missed him, the ball was lobbed back over into the box, where Maiga helped it on for Nolan to spoil the day.

Four games played, four games unbeaten, but also, four games without a win. There is an inner strength about the team which indicates that the players have clearly bought in to MON and his philosophy. That feeling was not there 12 months ago under his predecessor and it was around this time that the serious grumblings started.

I did not detect any undercurrents yesterday, but fans do feel that we need to be a little more proactive when we are ahead and go for (and score) that goal that will kill off the opposition. Maybe we should use Saha more – if his knee is up to it.

West Ham worked hard and they will be in no danger of relegation, unlike the two who came up with them. Like us, they have a work ethic and an experienced manager who knows where all the elephant traps in the PL are located.

The trip down was a dream as the autumn sun shone over the English countryside and Sounds of the Sixties rang out in my earphones. Brian Matthew and his producer Phil Swern always look for a real stinker to play and they found a gold plated one on Saturday, a 1967 ditty called Peace by The Wedgewoods. Mr Horan and myself sat open mouthed in disbelief at this one; it was almost as awful as a last minute Kevin Nolan equaliser.