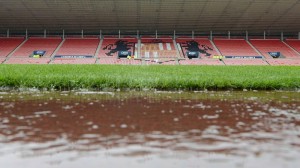 So Pete Sixsmith got away with his act of desertion, truanting from the first home game of the season to watch oval ball at Wembley, and still the treat of Reading at home to come. Here he offers thoughts on the more than slightly embarrassing postponement – and Warrington’s comfortable victory over Leeds in t’other game…

“Bit of a cock-up on the old drainage front,” as Reggie Perrin’s brother-in-law, Jimmy, might have put it, had he been in the Kings Arms or on the Metro en route to the Stadium of Light on Saturday.

It seems that the new pitch, laid after the Coldplay and Springsteen shows, does not drain. As Joan Dawson said: “They will probably open a cupboard in the bowels of the stadium and say ‘I wonder what these pipes are for’.”

The disappointment felt by 40,000 people in the North East was not as great as that felt by the 30,000 Leeds fans at Wembley on Saturday. To lose one cup final is disappointing, to lose again the next year is doubly so, but to lose three in a row is enough to make a man do a Reggie Perrin and disappear from the face of the earth, leaving one’s clothes nicely folded up at the waterside.

The game at Wembley was by no means a classic, with Warrington showing more flair and determination than a rather limp and flaccid Leeds. They had outstanding players in Hodgson and Hill and moved the ball around quicker than Leeds did. The absence of playmaker Danny McGuire and the fact that he was replaced by an 18 year old was akin to us losing Sess and replacing him with Billy Knott.

The game could have gone the way of my team had it not been for a controversial refereeing decision. A crunching tackle by Kylie Leulai on Brett Hodgson, dislodged the ball from the Warrington man’s grasp. The Leeds prop Brett Delaney picked the loose ball up and went over the line. Had the try been awarded, Leeds would have been ahead and who knows what might have happened.

The referee Richard Silverwood looked at the replay so many times that I thought he was going to yell “Cut: let’s do that scene again” before deciding that Leulai had made contact with the ball and knocked it on. No try and it gave Warrington the chance to push up, up and away to win the cup for the third time in four years.

Mr Silverwood will be well advised to keep away from the Original Oak and Headingley Taps for the next few weeks as he will be as welcome there as Alan Pardew would be at the Linesmen’s Christmas Party – although Pards could always push his way past the bouncers.

There was a torrential storm with thunder crashing and lightning flashing, but Wembley had fitted all the pipes and the pitch drained well. As at all Rugby League games, the crowd was well behaved with the traditional friendly atmosphere prevailing. To my left were a pair of Wakefield Trinity supporters, to my right a family of Warrington fans, with Leeds followers all round. Not a bad word was uttered and hands were shaken as the Leeds fans left before the end.

Wembley is much improved and looks good with a big crowd in. The middle tier was hardly populated (Club Wembley and all that) and some of the upper tier behind the posts had large gaps, but the atmosphere was good. Rugby League goes for razzamatazz and they do it quite well. There were male voice choirs, an opera singer and Olympic medallists. However, they were yachting types who few had heard of, presumably the clay pigeon man and the dressage horses were busy opening jumble sales and fetes.

I got news of the postponement at Sunderland at 1.45pm and assumed there had been a downpour of Dublinesque proportions. It appeared that it was persistent rain and that the water was sitting on the surface. Maybe, with hindsight, the referee could have waited for an hour and seen whether the forecast rain materialised and whether the water drained away, but we all know better after the event.

It means that Morecambe now become the first team to pit their wits against the new look O’Neill Special. I would imagine that Fletcher and Johnson will play some part on Tuesday night and that should boost the crowd into the mid 20s.

Of course, if it rains, we may end up playing at Ryhope CW whose game did go ahead on Saturday – but then it’s easy for them; they are on the top of a hill…