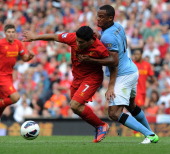 Posted in Arsenal, Newsnow Feed By By Far The Greatest TeamPosted on December 21, 2015January 30, 2017Tagged Arsenal

Arsenal host Manchester City at Emirates Stadium on Monday for the 17th gameweek of Premier League. With only a point between them, the two clubs will fight each other to get closer to the top. Gunners have the home advantage but Manchester City has a better attacking line-up. That said, Olivier Giroud, is currently in form and will hope to continue his goal streak against City.

Manchester City has failed to win in their last four away games and haven’t scored a single goal in the last three. Arsenal on the other hand has won three and lost one of the away games which was a 2-1 loss against West Brom. Arsenal has played 7 home games in the Premier League so far of which the only game they lost was their opening match of the season against West Ham.

The Gunners will play their 19th home game against City. Of the 18 matches played so far, the home team has only lost once, winning 11, and drawn 6. Overall City has lost 22 games against Arsenal.

Statistics clearly suggest Arsenal will have the edge over City on Monday but Aguero’s return can boost City’s chances of winning at the Emirates. On his availability, Pellegrini said in the official press conference, “Kun [Aguero] is working with the squad. We will assess if he is 100 percent or not but he is working without problems. I think he will be in the squad.”

City will however be without their captain, Vincent Kompany. “He is improving,” Pellegrini added. “I hope next week he will start working with the squad.”

Both Arsene Wenger and Manuel Pellegrini believe it is crucial match but think that it is not a title decider. “It is not a decisive game because after that we have to play 21 games more,” Pellegrini said. “But it is important to demonstrate who is the best team of the first round and to play against the team who is one point above our team. It is a game of six points.”