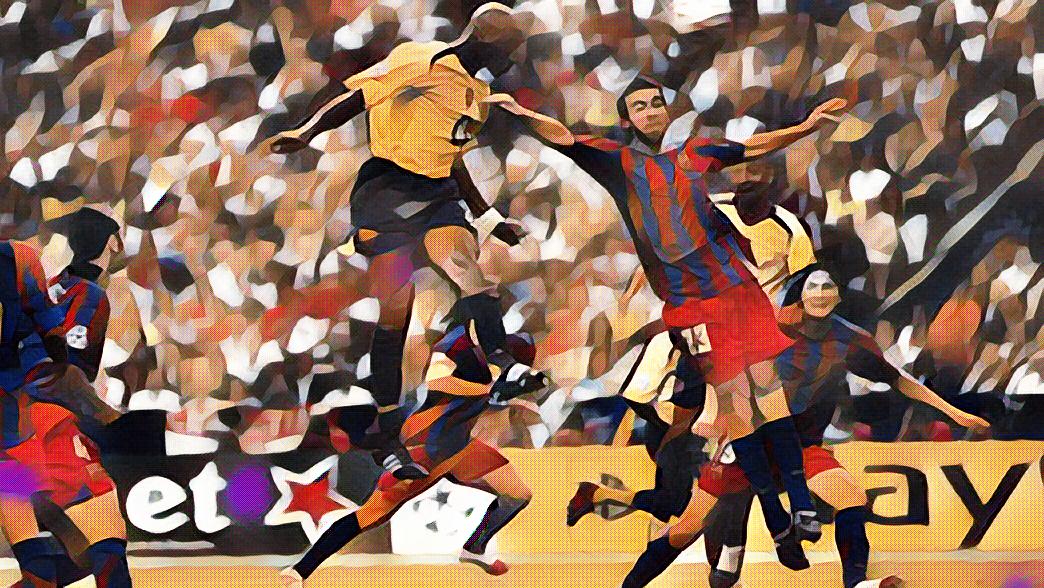 Arsenal are back in action in the unfamiliar territory of the Europa League this week, so we thought we’d look back at when the North London side could compete with Europe’s elite. Cast your mind back to the 2005/2006 season, where Arsenal reached the Champions League final, finishing runners-up to the emerging force that was Barcelona.

Arsene Wenger had been at Arsenal for nine years, and in that time he had brought seven trophies to the club, four FA Cups and three Premier Leagues, the last coming after going the entire campaign undefeated. European success had been sparse for Arsenal, with the Fairs Cup in 1970 and the Cup Winners Cup in 1994 being the only honours. It had eluded Wenger entirely, coming closest in 2000 when Arsenal lost on penalties to Galatasaray in the UEFA Cup final.

Arsenal under Wenger had shown themselves to be a truly world-class team, however, a Champions League trophy would cement both the clubs and the manager’s place within the football elite. They had come close, being knocked out by Chelsea amid their unbeaten league campaign two seasons before probably being the nearest.

The 2005/2006 would be a special one for Arsenal regardless of any European exploits. It was their final season at Highbury before they upped sticks to the newer, shinier and vastly bigger Emirates Stadium down the road. So perhaps the squad felt a sense of duty to their old home, to give it a proper send off.

The squad itself was much the same as the one who had gone the season unbeaten. Jens Lehmann was between the sticks, Sol Campbell and Kolo Touré were in central defence with Ashley Cole to their left, Freddie Ljungberg and Robert Pires on the wings, and the main man, Thierry Henry, led the line up front. There was one glaring absence from that Invincibles side, however – Patrick Vieira. The captain left for Juventus before the season began, his imperious presence in midfield and leadership was sorely missed, and it’s arguable the club have never adequately replaced him.

Arsenal began their Champions League campaign in Group B, alongside Ajax, Sparta Prague and FC Thun. They topped the group with minimal fuss, finishing with 16 points having won five and drawn one. The most memorable match of the group stage came away to Sparta Prague. Before the game, skipper Thierry Henry was one goal behind Arsenal’s record goalscorer Ian Wright, so much of the pre-game talk was whether he could equal the record. Henry did so in the first half with a sumptuous finish, bending the ball past the keeper with the outside of his right foot from the edge of the box. But levelling wasn’t enough for Henry, and in the second half he broke the record, poking the ball home after a terrific pass from Robert Pires.

While Arsenal’s group was somewhat fortuitous, their road to the final in Paris was anything but. In the round of 16, they were drawn against Real Madrid, the first time meeting them in the competition. To say the odds were stacked against Arsenal before their first leg away at the Bernabeu would be an understatement. A defensive injury crisis which left them with a starting back four of Emmanuel Eboue, an inexperienced Phillipe Senderos, Kolo Touré, and defensive midfielder Mathieu Flamini deputising at left back. They were up against the Galacticos, who boasted the talents of Zinedine Zidane, David Beckham and the Brazilian Ronaldo.

For the match, Wenger showed his more pragmatic side, as Arsenal put in a mature, level-headed performance. They weren’t overawed by Real, they kept their shape and let the Spanish side have the ball while remaining threatening on the counter.

Seconds into the second half, Arsenal were rewarded for their patient performance. Thierry Henry took the ball from the halfway line and powered towards goal, leaving white shirts flailing in his wake, before slotting home past Iker Casillas to give Arsenal the lead, and scoring what would be the only goal of the tie. They held on for the rest of the night and did so in the return leg at Highbury to win 1-0 on aggregate.

Thierry Henry in that first leg again showed why he was so valuable to Arsenal. He was a striker at the top of his game, arguably the best in his position, scoring 33 goals for the Gunners in all competitions, including some vital goals such as the goal in Madrid. With the departure of Vieira, there was worry of a leadership void, but Henry took the armband and the responsibilities that came with it, becoming not only a talisman for Arsenal but a leader, who the team could rely on.

The quarterfinal promised the return of their former captain, Vieira, back to Highbury as the Gunners were drawn against Juventus. The first leg was in London, with Arsenal winning 2-0. The night was a coming of age for one Cesc Fabregas – many saw Vieira’s departure as Wenger making room in the team for the young Spaniard, and that night he validated his boss’s decision. He got the better of Vieira on the night, putting in an excellent performance, scoring the first goal, and assisting Henry for the second.

Arsenal went on to defend their lead and draw 0-0 in Turin, leading to a semi-final clash with surprise package Villareal. The Yellow Submarine boasted a formidable side, with Diego Forlan leading the line, Juan Roman Riquelme pulling the strings and Marcos Senna patrolling the midfield. They were managed by future Premier League winner Manuel Pellegrini, who had guided them through a tough group which left Man United bottom, and knocking out Rangers and Inter Milan en route to the semi.

The first leg was again at Highbury, Arsenal winning 1-0 thanks to a rare goal from Kolo Touré, who stabbed the ball home at the end of the first half. It wasn’t a comfortable affair, with Villareal threatening, and the return leg was to prove much less so. Arsenal were on the back foot, Villareal the better side on the night, coming close to scoring on numerous occasions. Jens Lehmann had to work to keep the Spanish side at bay, as well as lady luck playing her part, as Diego Forlan missed a gilt-edged chance in the second half.

Arsenal looked to be making albeit uncomfortable progress to the final when in the 89th minute, Gael Clichy brought down Jose Mari in the area, and the referee pointed to the spot. Arsenal were in trouble, Villareal had been the better side all night and would surely advance given the opportunity of extra time. Riquelme kissed the ball and set it down on the spot, Jens Lehmann in between the sticks for Arsenal. The Argentine stepped up and sent the ball to the keepers left. Lehmann got down and parried the ball away, Arsenal cleared their lines. The final whistle blew and Lehmann was mobbed by his teammates, they were on their way to Paris and a showdown with Frank Rijkaard’s Barcelona.

On the night of the final, the Arsenal end of the Stade de France was a sea of yellow, after the club put a yellow top on every seat so the crowd mirrored their teams away colours. There was a sense of pride amongst the Arsenal fans, regardless of the result, their team had done so well to be where they were/

The game kicked off, and Arsenal started brightly, with Henry nearly scoring after 3 minutes only to be denied by Victor Valdes, who remained in fine form for the rest of the evening. Then on 18 minutes, the hero turned to villain as Jens Lehmann pulled down Samuel Eto’o, and was subsequently sent off. Robert Pires was sacrificed to bring on Manuel Almunia as the replacement, and Arsenal knew they had a long night ahead.

On 37 minutes, however, a shock. Emmanuel Eboue took a tumble outside the area, and from the resulting free kick, Sol Campbell towered above the rest to head Arsenal in front, his first ever European goal. The yellow end went into raptures, and Arsenal set about soaking up pressure for the rest of the night. They remained threatening on the counter and on 69 minutes Henry nearly made it two, but was denied by the superb Victor Valdes.

The introduction of Henrik Larsson on the hour mark proved to be Arsenal’s undoing. He was at the centre of everything Barca did, quite a feat in a side containing Ronaldinho, Deco and Iniesta. With around 15 minutes remaining, Larsson received a pass and touched it into the path of Samuel Eto’o, who slotted home. Only four minutes later Larsson was again the architect, passing the ball to the onrushing Juliano Belletti, who fired the ball through Almunia’s legs, inflicting a blow upon Arsenal from which they couldn’t recover. They lost 2-1, having fought valiantly and matched Barca despite having ten men for most of the game, but it proved not to be enough.

Ashley Cole left in the summer, along with Robert Pires. Henry departed for Barca the following year in pursuit of the Champions League, the one trophy he had not won as a player (which he did). Arguably, that team was the last great team of Wenger’s reign. Since then Arsenal have struggled to hit those heights, domestically or in Europe. They reached the semi-finals in 2009, but never looked in the same class as the side of 2006.

Much to the malign of a growing number of fans, Arsene Wenger remains in the dugout, entering his 22nd year there. The Frenchman must surely look to his teams of the past and hope to emulate them, to build another team and have another go at being Europe’s best. However as the years wear on, and as weariness amongst fans grows, those heights reached in 2006 appear more as a distant memory, rather than something to aim for.