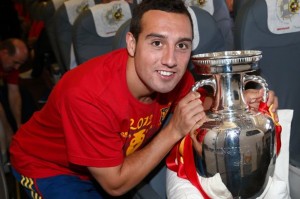 Early career: He joined his local team, Real Oviedo, when he was a teenager and was signed by Villarreal CF when he was 17. He spent his first two seasons playing for the B team. He made his début for the first team when he was 18.

What happened next: He joined Recreativo de Huelva on a four year deal when he was 22 although there was a clause in his contract stating he could return to Villarreal. He scored on his début and went on to have a great season for the club that finished that 8th season, having just been promoted from the 2nd Division. He was named Spanish Player of the Year and Villarreal resigned him. He had a great first season back with his old club and helped them finish second in the league with his goals and assists. Real Madrid tried to sign him but he rejected them, saying: “There are many other things in football besides Real Madrid. It’s clear that it is possible to say “no” to them, There is no doubt that they are a great team, but I also feel very satisfied and valued at my club. I hope I can continue growing at Villarreal because I am young and I’m only starting off with the national team.” Cazorla went on to struggle with injuries over the next two season and missed out on Spain’s World Cup squad in 2010 because of this. The following season he regained fitness and helped Villarreal secure a Champions League spot.

Then what: Villarreal needed to sell some of their higher earning players to help with their debt and opted to keep Guiseppe Rossi instead of him. He joined Malaga on a five-year-deal for £16m with a release clause of £39.5m. In his last season at Villarreal they finished 4th, with Cazorla assisting 10 goals, the same number as Cristiano Ronaldo, whilst Malaga finished 11th. In his first season with Malaga he was a great success, helping them finish 4th and in the Champions League spots, whilst Villarreal were relegated following long term injuries to Rossi. He scored on his début and went on to score four goals in his first four games for his new club. He scored an injury time equaliser against Real Madrid and the Bernabeu and finished the season as Malaga’s second highest scorer, with 9 goals in 34 games. However, Malaga ran in to financial difficulties and still owe Villarreal £3m from Cazorla’s transfer. Cazorla is one of several players who has not been paid in full and is seeking a move away from the club.

July 24th 2012: Malaga source – “Cazorla is not for sale, we do not talk about rumours in the press and our plans are not to even negotiate his exit.”

March 10th 2010: Cazorla – “I cannot say if I will return this season. At this time I have many doubts and negative feelings. It is impossible to set a concrete date for my return and that is the worst feeling. The World Cup is far off for me because I need to play and this is the problem.”

September 28th 2008: Robert Pires – “Cazorla has made a good decision. I can see him improving everyday in the normal atmosphere we have here. But next June Real will not be alone in their attempts to sign him, I expect Barcelona, Arsenal and Manchester to come knocking.”

5 Things We Learned from Liverpool vs Arsenal – Firmino to Become Superstar, Arsenal Missing Cazorla and Coquelin