The Arsenal Foundation has teamed up with its global charity partner, Save the Children to support ‘The BFG Dream Jar Trail’ which sees dozens of personalities supporting public art installations to raise money for children across the world.  The initiative coincides with the highly anticipated release of The BFG film which also marks the 100th anniversary of the author of The BFG book, Roald Dahl’s birth.

Our very own BFG (Big Friendly German) Per Mertesacker unveiled the Arsenal Dream Jar at Emirates Stadium with a group of Junior Gunners on Tuesday 12 July.   Among the group was 10 year-old Fahad from  Essex, who won a competition to name the Arsenal Dream Jar. The winning name – Golden Phizzgunner Dreams – was chosen by the Junior Gunner and sits proudly on the Jar’s plinth.

The Arsenal Dream Jar reflects the work The Arsenal Foundation has funded in partnership with Save the Children, helping children to have happy childhoods and a safe space to play.

Inside the jar is a bronze statue which shows an adult and two children running across a giant football, which symbolises Arsenal’s Dream to ensure everyone across the world has a safe place to play no matter where they are from and what challenges they face. The adult represents Per Mertesacker and the children symbolise two of the inspirational children who have benefitted from The Arsenal Foundation-funded football pitches run by Save the Children in Iraq – Esra* and Malik*.

The programme was developed in partnership with Save the Children to use the power of football to improve the lives of vulnerable children living in camps for internally displaced people in the country who have had to flee their homes because of conflict.  Through the football programme, Arsenal and Save the Children are giving children like Malik and Esra a place to dream of a better future.

Per Mertesacker said: “As Arsenal’s very own BFG, I’m so proud that we’re unveiling this special piece of art and supporting The BFG Dream Jar Trail.  Arsenal’s dream is for every child to have a safe place to play no matter where they live, which is why we’ve been supporting Save the Children’s vital work.  We will continue to work with them to ensure more children have safe spaces to play and show them that they are not forgotten.” 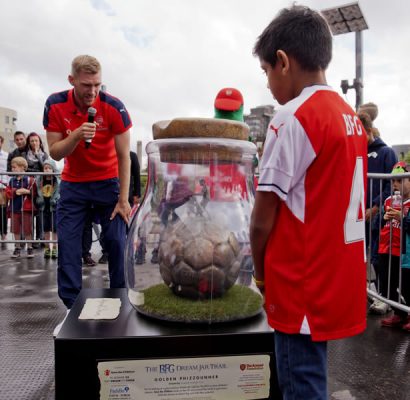 Ivan Gazidis, Arsenal CEO said: “Working in partnership with Save the Children has allowed us to do something very special. Using the Arsenal name and football as a motivating force, we are making a meaningful difference on the ground.

“Many of the children living in challenging circumstances are football fans. The game is part of the joy of their childhood. So much of that joy has been stripped away by what they’ve been through, but football pitches provide them with a place they can play, where they can be children again and do something they love.

We are sending a message to them that Arsenal cares about them and we hope this can be a motivating force for them and give them hope in desperate times.  We plan to develop more pitches and this dream jar reflects this desire to do more.”

Tanya Steele, Interim CEO of Save the Children, said: “Changing the world for children means giving them the chance to dream. Save the Children has worked in partnership with Arsenal for the last five years to ensure that as many children as possible get that chance. From launching our incredible football programme in Iraq last year to the new football programme we’re launching in Indonesia – we’re working together to use the power of football to improve the lives of vulnerable children and help them to dream again. We’re thrilled that The Arsenal Foundation is supporting The BFG Dream Jar Trail and, through the money raised from the sale of the Golden Phizzgunner Dreams Jar, we’ll make sure that more children get the opportunity to fulfil their potential no matter how big their dreams are.”

The Golden Phizzgunner Dreams Jar will be hosted at Emirates Stadium until Wednesday 31st August 2016, giving children, families and Arsenal fans across the UK the chance to visit the Jar for free throughout the entire Summer.

The Arsenal Foundation has been supporting Save the Children as their global partner since 2011 and has raised more than £1.5million to support the charity’s life-saving work.  In addition to funding long-term education programmes for children in China and Indonesia, Arsenal has been a committed contributor towards Save the Children’s emergency response work donating to the charity’s appeals for the Japan Earthquake, East Africa Food Crisis, Ebola Outbreak, Philippines Typhoon, Nepal Earthquake, Syria Crisis, the Child Refugee Crisis and most recently a new football programme in Iraq.

From the Touchline: Mazzarri Aggressiveness Pays Off In Watford’s Defeat of Arsenal