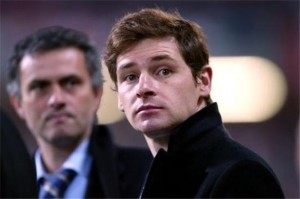 His second coming didn’t start very well and critics were already calling for his head after the first three games, but it seems like Spurs have turned a corner and they owe it to Andre Villas Boas.

After stepping out of Mourinho’s shadow and proving his mettle at Porto, the job at Chelsea seemed like prime stage for this young tactician to prove his worth. However, his eagerness to embed a new style and new set of players met with resistance from some of the existing bunch. As a result, points were dropped frequently and AVB had to pay the ultimate price. His critics will claim that Di Matteo did a much better job and won Chelsea the champions league. After Mourinho was sacked, Avram Grant almost led Chelsea to the same trophy were it not for a wayward penalty. But that does not necessarily make the latter a better manager.

Following recent developments, it is pretty clear that any manager will find it difficult to manage a team with personalities like those of the ‘toxic twins’ Terry and Cole. A young coach whose job role included making DVDs for Mourinho sounds like the perfect candidate for air rifle target practice let alone later become the manager of the club. It is interesting that AVB got a lot of criticism for handling certain personalities because with the exception of Lampard, players that were shunned by him – namely Anelka, Kalou, and Lukaku – have been shipped out by Di Matteo at the start of this season.

I, for one, was happy that AVB was given the job at Spurs. They are a team that have consistently fallen short of achieving their potential (save that one UCL appearance) and could do with a good tactician at the helm. For all his rousing half time speeches and man management skills, tactics were not Harry Redknapp’s strong point. For instance, Defoe’s movement this season has been different, and intelligent. Last week against Manchester United, his diagonal run dragged Evans along with him which gave Bale the chance to sprint past Rio Ferdinand and score. Under Redknapp, Spurs would have probably crumbled under United’s second half onslaught but AVB made the right changes by getting Dembele to sit on Scholes and then use the fresh legs of Huddlestone to do the same.

Spurs have a well balanced team this season. Dempsey’s hybrid role and energy means that he can press well whilst the opposition has the ball (something that Van Der Vaart was guilty of not doing that often) and still be in the right places to score, thereby ensuring that Van Der Vaart isn’t missed sorely. Dembele, besides being an effective and proven box to box midfielder in the Premier League, provides additional shield to the defence along with Sandro. The potential Achilles heel is that they are probably still thin up front and it will be interesting to see how AVB deals with Adebayor if the latter were to sulk over lack of starts.

New managers usually come with their own ideologies and in order to implement the same, chopping and changing the existing system might be necessary. Brendan Rodgers is doing this at Liverpool having got rid of Adam and Carroll, and sidelining Downing and Henderson. AVB paid the price for trying to change things too quickly at Chelsea. He’s probably learnt from the experience which is why he made sure additions were brought in to replace departing players and not by sidelining existing players (Dembele and Dempsey for Modric and Van Der Vaart respectively).

As this article is being finished, Spurs have just beaten Villa and are steadily moving up the table. Spurs fans will be hoping that the hours spent watching videos and drawing tactics pay dividends, and that the ‘AVB project’ Mark II delivers.

PICTURE: History repeats itself for Spurs vs Manchester United in the snow