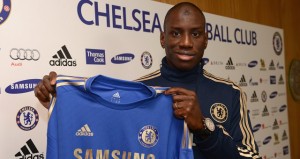 Demba Ba today completed his £7.5m move from Newcastle United for Chelsea, which has seen him travel from relegated West Ham to the champions of Europe in just eighteen months.

“It feels good to be here, I’m very happy and very proud,” said Ba. “It was important for me, and for Newcastle, to get my future sorted and now we can move on. Now they have the whole month to buy someone and for me as well, the sooner the better. Now I am here I just need to get settled in. When the club who won the Champions League wants you, the decision is very easy. This club is massive and that’s something that helped the decision a lot. It was not a hard one.”

Whilst Ba hasn’t played with any of his new team mates before, he does know summer signing Eden Hazard through a mutual friend.

“I know Eden Hazard a little bit,” he said. “I met him through a friend and [goalkeeping coach] Christophe Lollichon as well. I met him some times in France, so there are a couple of faces I know a little bit.”

Ba is currently the second highest scorer in the Premier League with 13 goals from 20 games so will certainly help boost Chelsea’s striking options with Fernando Torres’ continued poor form. There are some question marks over his long-term fitness though after dealing with a knee injury that has plagued his career. In the January transfer window two years ago Ba was set to move to Stoke City for a reported £7.1m but the move collapsed after he failed a medical. Eighteen months earlier a deal had been agreed between his former club 1899 Hoffenheim and VfB Stuttgart, but this too was cancelled due to a failed medical. His time at Newcastle has been relatively unscathed, with him missing just four league games last season and playing in all their league games this season.

Chelsea to Hijack Arsenal’s Bid for Player of the Month of December? Player Prefers Transfer to Man Utd

Loic Remy’s Injury Have Speed Up Alexandre Pato Transfer, Superstar Should Start Against Arsenal this Sunday

PICTURE: Chelsea TV confirms Lampard’s career with blues is over