The Friday night fixture saw Leverkusen in their first game following the sacking of Roger Schmidt, taking on Werder Bremen, who are on a charge to avoid the drop. Things started pretty quietly until Julian Brandt fired a delicious strike from just outside the box, crashing down of the bar. The ball didn’t cross the line but bounced up for what seemed like an eternity. The only person to react, you’d think it would be Chichorito but no, it was Kevin Volland. He headed the rebound into Weidwald’s empty net, making it 1-0 after 7 minutes, lifting the anxiety around the BayArena.

From then on the game was flat, well from Leverkusen’s part anyway; they didn’t offer much else and the longer the game went on; the more in confidence Bremen grew. That was when Claudio Pizarro levelled things up for Bremen, deflecting it in following Bauer’s shot.

Bremen looked the most likely to capitalise as Leverkusen continued to withdraw into their shell, but a number of near misses and decent saves from Leno kept it 1-1. In the dying moments, literally the last attack, Max Eggestein’s heavy touch invited Benjamin Henrichs to pressure him, and Eggestein swung his boot out of control bringing him down in his own box conceding a penalty. Something the youngster will certainly learn from.

Up steps the captain Toprak and it’s safe to say, he and the rest of Leverkusen are low in confidence, it was one of the worst penalties I’ve ever seen; side footing it within easy reach for Weidwald to smother. Then the final whistle blew, Bremen were saved after that horror miss, and Leverkusen falter again.

Two decent sides faced off at the Schwarzwald-Stadion, Freiburg hosting high flying Hoffenheim. Maxi Philipp broken the deadlock on 56 minutes but things were levelled up 4 minutes later from ex-Leicester man, Andrej Kramaric. It was a fabulous goal and neither side had enough to clinch a winner, so thing finished 1-1.

Who loves a 6 pointer? Me, I love a 6 pointer. Especially when the side who I said were ‘dead and buried’ last week, fight for their lives. ‘Fight’ is exactly what they did, Darmstadt were 2 goals to the good within the first 12 minutes thanks to Sulu and Sidney Sam. Sam once thought to be the next big thing during a time when young German players were much sort after, he never really lived up to that status, but it’s good to see him playing and getting on the score sheet again.

Robin Quaison pulled on back for Mainz – who have been really struggling to put any sort of run together this season – but it wasn’t enough by the end of it. They huffed and puffed but Darmstadt stayed firm and saw out the victory, maybe there is hope after all!

Now time for a battle between two sides aiming for European football, you could argue that BVB should be aiming higher, but this season has been so inconsistent for Tuchel’s men. Things didn’t go to plan either when Kalou opened up the scoring on the 11th minute. That was until some lovely build up play from BVB where Kagawa’s twinkle toes moved the ball around to fool two defenders before slipping it through to the Bundesliga’s top scorer Aubameyang to snatch at it and fire it into the back of the net, 1-1.

Hertha took the lead for the second time in the game, thanks to Marvin Plattenhardt’s lovely free kick and it was enough to see off Dortmund, BVB slipping to their 5th defeat of the season.

Unfortunately the game will be over shadowed by the most atrocious piece of overacting arguably ever seen in the Bundesliga. Hertha’s Mitchell Weiser – remember the name – will never be forgotten for his abysmal overdramatic reaction in the 89th minute. Dembele was fouled by Weiser and out of frustration, Weiser picked the ball up and kicked it away, as the on rushing Dembele was trying get the ball back, Weiser’s foot narrowly missed the Frenchman’s face as he threw himself out of the way. Dembele flung himself to the floor in a move that Keanu Reeves would have been proud of but in doing so, his foot ‘may’ have hit Weiser. Weiser’s reaction to this was to jump in delayed fashion and roll around on the floor as if his leg was broken. This is something that I would expect to see in the Serie A in which Italian football is famous for, – I love Italian football by the way – however, this kind of reaction was as bad as Rivaldo in World Cup 2002.

Another comfortable win for the league leaders Bayern München at the Allianz Arena, they beat high flying Frankfurt 3 – 0. Goals from Douglas Costa and a brace from Robert Lewandowski, he keeps up the heat on Aubameyang in their personal dual to be top marksman. As many times this season, Bayern haven’t particularly played that well but seem to find a way to win, it’s a sign of what champions are made of. It was also Lewandowski’s 100th goal for Bayern, an incredible landmark from a top class striker. Mats Hummels made probably the tackle of the season stopping a clear cut chance for Frankfurt, which at the time, would have put them 1-0 up.

2nd placed Leipzig needed to win to keep up the heat on Bayern as they hosted underachieving Wolfsburg at the Red Bull Arena. Leipzig were obviously the bookies favourites going into this game and with Wolfsburg in such poor form the outcome was always going to be one way. However, football isn’t always as easy to predict as that. The Wolves stunned Die Roten Bullen with a goal from fox in the box, Mario Gomez. His goal secured a massive 3 points for the relegation threatened Wolfsburg in their race for survival. For Leipzig, it will be deemed as 3 points lost in their race for the title. Is it out of sight now?

With Ingolstadt and FC Köln both fighting for points at either end of the table, Saturday’s late fixture promised to be a decent affair, my early prediction was that Anthony Modeste would be the difference maker. FC Köln took the lead twice thanks to Modeste; although they were left perplexed after Roman Bregerie’s shot found its way into Timo Horn’s net. The high potential goalkeeper somehow fumbled the ball into his own net from what should have been a routine save. Timo returned following a lengthy spell on the sidelines and will quickly want to forget this mishap. He has subsequently apologised to the fans following the game. I am a big fan of his and hopefully this doesn’t affect his game, he has the type of character to cope under pressure but time will tell for the young man. On a side note, Ingolstadt’s first goal, from Dario Lezcano, was a fantastic team goal capped off with a lovely finish.

Sunday’s early fixture saw another 6 pointer at the bottom half of the table, struggling Schalke taking on Augsburg at the Veltins Arena. Both sides needed the points in a very tightly congested bottom half of the table, however, it was the Gelsenkirchen side that took the 3 points, in a game where they clinical in front of goal. Two goals from January signing Burgstaller and one from Caligiuri wrapped things up with just over 30 minutes played. If there was ever a time for Schalke to get some points then it was then, it should ease some pressure off Markus Weinzierl for a while. Choupo-Moting marked the win with his 200th appearance for Schalke.

Another twist in the battle of the drop as HSV saw many of their rivals picking up points this weekend and you could say they used that as their motivation. After Gladbach took the lead from Andreas Christiansen you would expect that the foals would continue their pressure, however Kostic equalised for HSV on 36 minutes. HSV pushed and pushed and it finally paid off, Bobby Wood struck on 80 minutes claiming 3 vital points for Hamburger in this torrid season for them.

With Bayern now 10 points clear of Leipzig, surely it is the Bavarians title too lose; and we all know that Bayern don’t do losing. The chase for Europe still continues and with only Hertha taking maximum points this weekend, there is still so much more to play for. But it’s the bottom half of the table that looks like it will be tense right the way to the end. There are only 9 points separating HSV in 16th, all the way up to Frankfurt who are sitting in a European spot in 6th. Fascinating stuff and with 10 games to go, it’s going to make a cracking end to the season. 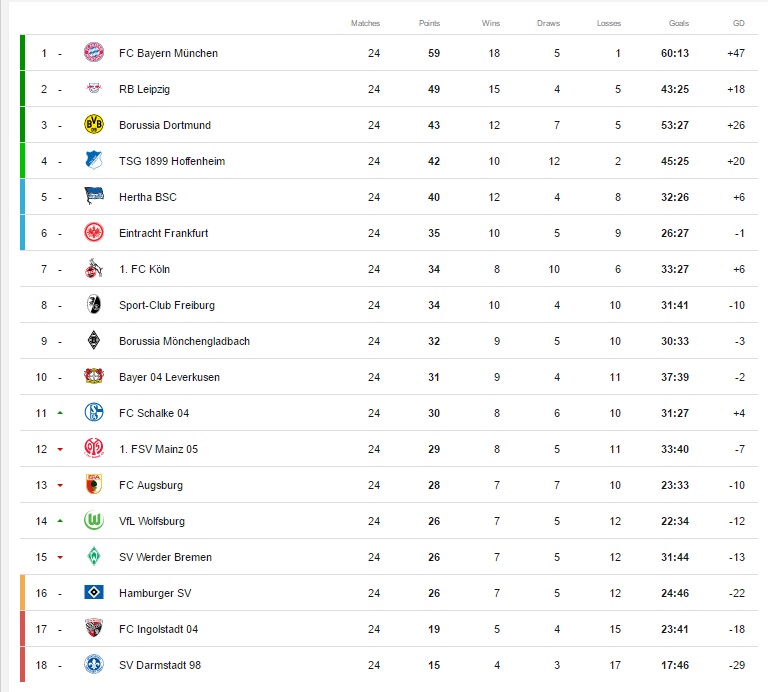