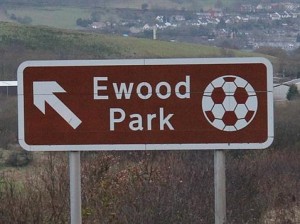 I am not really one to wish ill on anybody, certainly not to the point where anyone is robbed of their livelihood and/or their job. But in the case of Steve Kean I am willing to make an exception. After spending nearly two years being a 50% stake in a party systematically taking apart a great footballing institution like Blackburn Rovers he paid with his job… and not a moment too soon either, in fact several hundred moments too late as it happens.

With Rovers third in the Championship at the time of his forced resignation some would look at the situation and say his sacking was harsh and premature. To that I would reply that he’s taken us down a division, lost 50% of his 74 games in charge and looked beyond inept in the process.

You’d have thought Venky’s were to blame as they direct and script the whole show and you’d be right to a certain extent, but it’s difficult to put into words the level of control and manipulation Kean has exercised over our naive owners during his term in the Ewood Park hot seat. Only a limited portion of the outside world will have seen this, in fact the vast majority have been painted a different picture of an angry mob going above their station and outside of what’s rational in attempting to take down a follically challenged victim.

But unfortunately for fellow fans of the Rovers like myself, we’ve very much lived and experienced a completely different story..

Goodbye Steve, good riddance, please take your merry band of bullshit and bare faced arrogance elsewhere – I’m not sure I’d even wish you on Bolton, or Burnley. Well maybe Burnley.

Anyway, now I’ve got that out of the way I’ll move onto more important matters in the form of the next challenge – the person who follows the nightmare.

In a way the Blackburn Rovers job looks quite an attractive proposition for anyone, the new guy would get a ready made and wide ranging squad which is HUGE in relation to any other in the Championship. It’s a shot at instant promotion given the right skills and a budget to work with in future window which can only increase if the golden goal of an immediate return to the Premier League is achieved.

It’s a chance to work for one of the most famous and oldest institutions in English football and with a set of facilities that screams top flight in all but name.

The volume of applications that have been submitted for the role since it became vacant is testament to that but unlike a lot of jobs that become available in football their isn’t a clear cut and all together obvious choice as to who should get the gig. Fan polls conducted in the Rovers section of the footballing community confirm as much. The likes of Ole Gunnar Solskjaer, Ian Holloway, Roy Keane, Alan Shearer, Tim Sherwood and even Bernd Schuster have all been heavily linked with the job but there isn’t one that leaps out at the page and goes YES! That’s the one, go all out and get him.

And lest we forget that even if the prime candidate did exist there is a world of pitfalls out there to greet him.

First stop. Venky’s. Where to start with this one? The new manager would have to work under the reign of one of the least popular groups in the UK (or India for that matter), they make the government look frightening transparent and honest. Their reign to date can be stereotyped by that of a cocky teenager at a nightclub trying to pull a member of the opposite sex…

They bounce in all fresh eyed and cocky, they look good, they mean well, they’re saying all the right things and most give them hopeful, excited looks as a result. But after spending ten minutes talking to them based purely off the initial attraction you realise they’ve oversold themselves, they’re saying things just to get you to like them, what they have to offer and can perform satisfactorily is a long way short of the hype they’re giving themselves. It’s like being promised an efficient night of love making with Kelly Brook and ending up with Susan Boyle.

Sorry for the bad analogy but it’s the best I could come up with.

They’ve ripped up the club infrastructure and replaced respected footballing power players like John Williams and Tom Finn with yes men like Paul Agnew and Paul Hunt and given them confusing job titles. Basically, they’ve got it wrong and we’ve paid the price.

Not to mention tossing Sam Allardyce out into the cold without much of an explanation and to the ire of anyone with a clue about football. Oh and 6 months worth of savage cost cutting more or less rubber stamping relegation last season.

Sure, they’re at the stage now where they are trying to rebuild and start a fresh, but it’s been a constant barrage of bad decisions made by the gang in Pune and their own stubbornness to correct these calls that has seen them slide down the popularity scale.since November 2010.

They are currently nigh on 3 weeks into the existing process of trying to appoint a new boss as well. There is normal time, slightly ponderous, slow, ball achingly sloth like… and then Venky’s time.

Their track record won’t make a good basis for prospective and sane employment by any new manager.

Also, any appointment has to factor in the juxtaposing colleague and all powerful “Global Advisor” Shebby Singh. Before I get started on Singh I’d like to say, for one, that I actually like him – he shoots from the hip and he speaks his mind, he’s made the effort to establish communication links with the fan base which haven’t been present prior to his arrival in East Lancashire so fair play to him and I think he’s done well.

But… he’s a motor mouth and is a controversial figure to say the least. A manager would have to possess a lot of patience and a broad sense of reality to take orders from and form a working bond with a man who’s already branded a long serving player a “pensioner”, made fun of the previous boss and who by all accounts has a huge say in transfer policy.

He’s also split the Rovers faithful pretty much 50/50 – all within about ten minutes of rocking up with his fancy new job role. If anything he’s added to the circus environment rather than take away from it.

And let’s not forget the fans. With all the justification in the world any new gaffer will have in the back of his mind that a bad run of results could see the atmosphere turn sour, really sour. The feeling of resentment and hostility that Kean drilled into the four corners of Ewood Park won’t just go away overnight. Trust has not just been lost between club and fans, it’s been taken, smashed around the head with a cricket bat and launched out to sea on a rocket, someone new would have to accept that they’re introducing themselves into an environment of relieved stakeholders but ones who are still scarred deeply.

It might get nasty again, not saying it will be the threat is there.

To wrap this up, we as Rovers fans need Venky’s to get this right. Everything so far indicates this won’t be an easy appointment to make but I’d bet a fair wedge of cash that this is their biggest decision to date and one as owners they need to get right, and in spite of all the reasons I’ve just rattled off like a drunken ranter it’s still a very attractive job to take on.

In a way I’m not surprised they’re taking their time, but we need a reason to believe again. If they can get the fans onside with a solid appointment who the crowd can get behind I wouldn’t rule out promotion, in fact I’d suggest it would be pretty damn likely.