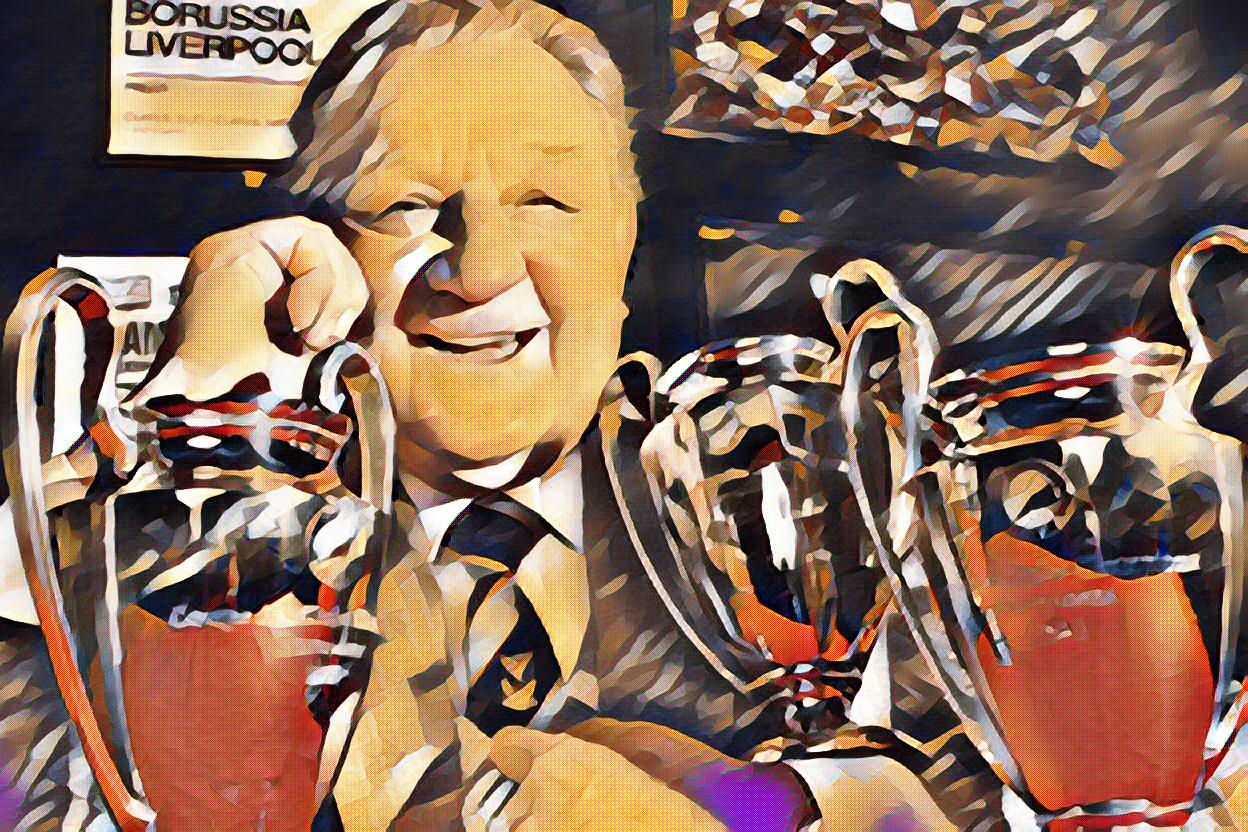 He took Liverpool to some of their greatest ever achievement and collected an amount of trophies others can only dream of. This is the story of Bob Paisley.

He was born in the small coal-mine village of Hetton-le-Hole in County Durham. He started to play football for Bishop Auckland before he moved on to Liverpool at the age of 20. He was stationed at various places in Great Britain during the Second World War including a camp in Rhyl. He was stationed at a camp close to Tarporley in Cheshire where he could take the bicycle back to Liverpool and Anfield for the games – even though the distance was as far as thrity miles. In 1941 he was stationed overseas and got a place in Egypt. There he didnt just learn how to drive a 15 hundredweight truck, he also picked up the interest for Horseracing which would follow him through his whole life. In 1943 he went with the Eighth Army into Sicily and Italy.

When the war was moving to an end in 1945, Paisley went back to England again where he around the same time met his future wife Jessie on a train. Although their children were quite suspicious that it happened in this way – considered how modest and quiet their father was. Jessie’s father wasn’t very impressed by the fact that his daughter had met a football manager on a train and fell in love with him. Jessie told him that Bob used to be a bricklayer which her father accepted as “a real job” and everything seems to be okay. Jessie and Bob moved in together and later got married. They were both two modest persons that enjoyed the quiet and simple life – having rug making in the evenings as their favorite hobby.

On the 5th of January in 1946, Bob made his official debut for Liverpool in a 3rd round of the FA-cup. The next season he helped Liverpool to their first ever division one title. When he was left out of the squad for the FA-cup final in 1950 he felt devastated. Something that would follow him for years. He said many years later that that was something which made him more aware of how his own players felt when he left them out as a manger.

Bob retired in 1954 and became a member of the backroom staff that would help Bill Shankly with everything he asked for. Bob started to learn physiotherapist and got the permission to be at the local hospital and watch how thing were being done. Physiotherapist was a pretty new phenomenon in football and Paisley started to test various technics and new methods to ease the players pain and flaws. During one of these early years Bob tried out some electrodes that would ease the players pain. He was trying it out on Jimmy Melia and told him that if he felt any discomfort he had to say something and Bob would turn the machine off. Did he feel anything?

“No Bob” said Melia. “how about now?” said Bob. Still nothing said Melia. Shankly was on the merge of losing his temper.

“Bob for Christ sake, have you even read the instructions?”.

“No, the instructions is in German” said Bob.

“Don’t you speak German, you were in the war for Christ Sake”.

Finally Chris Lawler pointed out that the contact wasn’t plugged in. Bob plugged it in and Melia’s leg shot up in the air. “Turn the damn thing off” yelled Bill. Bill was obsessed with finding new treatment devices since he hated players to be in the treatment room – or “The Bastards Club” as he called it.

It was during Shankly’s manager era that the legendary “Boot Room” was invented. It was one of the other assistant mangers, Joe Fagan, that came up with the idea to use the storage room which including the players boots and other equipment to discuss all the things that concerned the team. Everything from the next signing to new practice exercises. Shankly loved the “Five a side” and he loved to challenge the players every week for a game between the players and the managers. Bob used to be the goalkeeper since he had started to limp after his playing career was over.

In 1974, Bill Shankly announced that he was going to retire. The decision came as a shock for the whole city of Liverpool and no one really believed he was serious. The club’s secretary Peter Robinson said “Just give it a couple of weeks and everything will be back to normal”. But he was serious, and now the focus laid on finding a new and good replacement. When Jessie and the children heard on the radio that Shankly had decided to retire, one of the kids asked “do you think that daddy is going to be the new manager”. Their mother was convinced that wouldn’t happened. In fact, not even Bob himself thought that was going to happened. When he finally understood that it was the directors desire to be to new manager he was very reluctant to the idea. He even told them that he wasn’t interested and that they should try to find someone else instead. But they managed to convince him and then it was finally official. The players found it pleasant with a manager they already knew and who knew them.

Bob wasn’t much of a big talker and his weekly meetings with the players on Fridays was often followed by giggles among the players. Not only didn’t he have much to say, he often mispronounced their names. One classic event happened in the early days when he couldn’t find the name on the player that Ray Kennedy was going to mark. It ended up with Bob saying “Oh bollocks” and telling his players to go out and play better than their opponents. His press conferences was pretty extraordinary  too. It didn’t give much too the journalists that was hoping to find thing to fill the papers with. One press conference went on like this;

When someone after that asked a real question, he was met with suspicion and a face expression from Bob that said more than the whole press conference itself.

In his first season as manager he won the FA Charity Shields and ended second in the First division. But things started to come together and in his second season he won the League and the UEFA Cup. The UEFA Cup was his first European title and it was lifted at the Olympiastadion in Brugge. Liverpool had won the first leg at Anfield with 3-2 and was able to draw in Brugge after a goal from Kevin Keegan. The first leg had been tricky for Liverpool since they were 2-0 down after only 15 minutes. But in the second half Bob made a switch. He brought on Jimmy Case instead of John Toshack and that really turned things around. Ray Kennedy, Jimmy Case and Kevin Keegan all scored in the phase of only six minutes. Toshack was of course not completely satisfied with being removed so early as halftime but after the game he couldn’t argue with the decision. “A change of approach to the game was needed to turn things around. And this showed the tactical knowledge of Bob”.

The League title that year was sealed after a victory away to Wolverhampton. Phil Thompson knew that his brothers were on their way to watch the game but they didn’t have any tickets – just as many other Liverpool supporters that day, they were hoping to find a way in anyway. Thompson approached Bob and told him his issue. Bob helped them and Emlyn Hughes’s friends to go through the dressing room and enter the ground. It was a weird moment when several of Emlyn’s friends went through the dressing room with flags, banners and drums just as the team was preparing for one of their biggest game in their careers.  Liverpool won thanks to three goals in the dying minutes of the second half. Emlyn was sure about who was the manager of year after the game was ended “It got to be Bob. He’s definitely the manager of the year.”

In the next season he defended the league title and won his first European Cup. 3-1 in Rome against Borussia Mönchengladbach sealed the deal. When Bob was approached by Italian journalists at the airport in Rome ahead of the game he was asked if this was his first time in Rome. No it wasn’t he said. Last time I came here in a tank. Robinson tried to smooth things over with the Italians and thanks to him that line didn’t make it to the next days newspaper.

24-thousand Liverpool supporters had made their way down to Rome and some of them had made the classic banner;

made the swiss roll

Bob would go on to win the European Cup two more times. And when he decided that enough is enough in 1983 he had spent 44 years in various positions at the club he loved. In his honour Liverpool created “the Paisley gates” at Anfield. And up until this day you can still see the Liverpool supporters, waving their flags with Bob’s face on it.