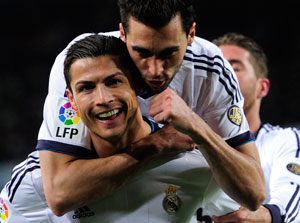 Bookmakers are number crunchers 99.99 per cent of the time, setting their football betting odds based on statistics and other forms of important data such as injury and suspension news. But, when it comes to Barcelona, it seems that logic goes out of the window and irrationality takes over.

Apologies to Celtic versus Rangers, Boca Juniors versus River Plate and Everton versus Liverpool and other famous derbies but there is no bigger club game than El Clasico, the name for any match between Barcelona and Real Madrid.

Every El Clasico brings the football world to a standstill and the giants will go head to head at the Santiago Bernabeu on Saturday 2 March 2013 for the 166th time in the Spanish La Liga tournament, with Real Madrid’s El Clasico league home record standing at 50 wins, 15 draws and 17 losses.

Furthermore, Real Madrid is unbeaten in its last 35 home games across all competitions, winning 28 of those matches and heading into Saturday’s El Clasico off an impressive 3-1 Copa del Rey away defeat of Barcelona earlier this week.

Everyone knows that Barcelona is 12 points clear at the top of the Spanish La Liga ladder and well on its way to taking out its 22nd domestic championship. Most people accept that, on their day, Barca are the world’s best club side. But it beggars belief that Tito Vilanova’s team is the favourite for this weekend’s El Clasico in Madrid’s big backyard.

To say that the odds do not make sense would be a gross understatement. Real Madrid has not lost any of its last four games versus Barcelona and the manner of its 3-1 Camp Nou victory on Tuesday was such that it will go into the Spanish La Liga encounter with more confidence than Jack Nicholson takes into an Academy Awards after party.

Barcelona is going through its roughest spell of the season, losing two of its last three matches and, with the Spanish La Liga title race all over bar the shouting, it is focused on salvaging its UEFA Champions League campaign. Barca trails Milan 0-2 after playing poorly at the San Siro.

What should the betting on Saturday’s El Clasico result look like? Well, the home side is entitled to be the favourite so something like 11-8 Real Madrid, 7-4 Barcelona and 5-2 draw, with the draw out of the gate because there should be goals and the only draw about which any punter can take a strong view is a goalless one. Anyone who backs the draw may as well dutch 1-1 and 2-2 at odds of around 7-1 and 11-1 respectively. The dutched bet works out at nearly 4-1.

If punters pick their spots to oppose Barcelona, there are value bets to be struck and profits to be made. El Clasico is just one example of how bookmakers are overrating Barca currently. Another one is the UEFA Champions League tie between Barcelona and Milan that is at its halfway stage.

Barcelona is 0-2 down going into the Camp Nou second leg yet bookmakers think, give or take a few percentage points, that the outcome of the tie is a coin flip. That is ludicrous.

First, there are the historical arguments against Barcelona and for Milan. The history books show that only 18.6 per cent of teams that lose the first leg of a European tie 2-0 away from home end up winning the clash. Also, Italian Serie A teams are 46-9 in terms of progress and elimination after winning the first leg of a European tie 2-0 at home. The last Italian side to falter from this very strong position was Milan in the UEFA Cup quarter-finals 17 years ago. A bloke by the name of Zinedine Zidane inspired Bordeaux to win the second leg 3-0 in France to knock out the Rossoneri.

And second, there are this term’s goal-scoring statistics for Milan and goal-conceding statistics for Barcelona. The Rossoneri have scored in 15 of their 17 competitive road games this season, including in 10 of its last 11 away matches. Overall, Milan has scored in 28 of its 35 games, including in each of its last seven matches and in 13 of its last 14 games. Massimiliano Allegri’s side scores regularly. Barcelona concedes goals just as regularly as Milan scores them. Barca have kept only five clean sheets in their 20 competitive home matches this term and they have let in a goal in 31 of their 42 games played anywhere. Those are numbers that will surprise the average football punter.

There is a very strong chance that Barcelona will have to score at least four goals in normal time of the Camp Nou second leg to eliminate Milan. Back the Rossoneri at odds of around 8-11 to knock out Barca because the market is wrong.