Before the start of the Premier League season, both Manchester United and Manchester City were strong contenders for the title as a general consensus amongst pundits. Signing players such as Bernado Silva, Romelu Lukaku, Nemanja Matic and Kyle Walker were shrewd captures to go alongside the wealth of resources already at both teams’ disposal. What’s more, the fact that the two sides have arguably the best two managers in world football at the helm, now adjusted after their first full season in Manchester, also proves to be a good indicator as to why they were both heavily tipped to succeed.

Yet judging by the differing performances of City and United on Saturday, it would appear that the title is heading in only one direction: to the blue half of Manchester. Whilst United were content to sit deep and dig in against Liverpool, City were bold and full of attacking exuberance. Pep Guardiola’s side sent out a statement of intent to the rest of the league with their dazzling 7-2 victory over Stoke.

United on the other hand were far from eye-catching, ensuring that yet another much-anticipated Manchester United vs Liverpool fixture turned into an anti-climactic stalemate bereft of any sense of entertainment or creativity.  The match stats perfectly illustrate United’s defensive approach, managing just one shot on target, and only six shots in total compared to Liverpool’s nineteen. David De Gea’s heroics ensured that United held on for a draw, as he made a crucial point-blank stop to deny Joel Matip from giving Liverpool the lead.

Perhaps Mourinho was content to preserve United’s unbeaten start to the season, as they have now won six and drawn two. The only other unbeaten side is of course City, whose goal difference is six better than United’s. Of course, Liverpool away is theoretically tougher than a home fixture against a Stoke side, who are currently in the bottom four. A draw at Anfield is far from a disaster, and many teams would happily take a point there. However, given the expectations amongst fans in Manchester, it was the manner of the performances that really illustrated two contrasting styles of play: one full of swagger and style, the other dogged and insipid.

It was just a minute before first-half stoppage time when United finally managed an effort on goal, as their game was overwhelmingly revolved around keeping their discipline when dropping plenty of defensive bodies behind the ball. As the image below shows, United are sitting very deep with over an hour of the game played, with a full ten players behind the ball including goalkeeper David De Gea. The image shows the lack of urgency to get forward and take the game to Liverpool; instead battling for a flavourless 0-0 draw. 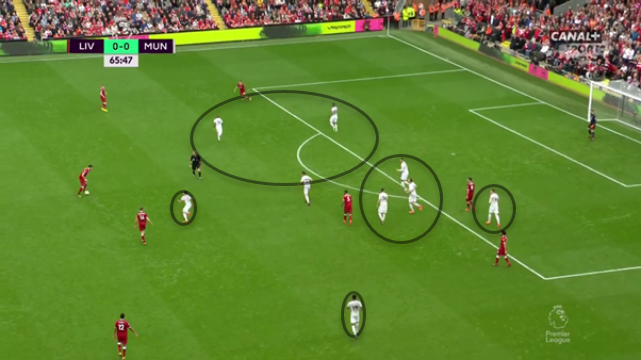 Manchester City on the other hand took the game to Stoke from the very start of the match, managing 20 shots in total compared to United’s six, with 11 of these on target. City were at their dominant best, racking up nearly 80% per cent possession over the duration of the match. Even without the clinical Sergio Aguero, City’s attacking line-up oozed class and a sense of adventure.

With Kyle Walker and Fabian Delph in the full-back positions, City essentially attack with seven/eight players swarming around the Stoke penalty area. The below image, just ten minutes into the game, shows City’s attacking intent with plenty of players surging into the box from all angles. There are plenty of options in terms of goal scoring potential, and it is clear what the intention is. As a result, six different City players got themselves on the score-sheet. 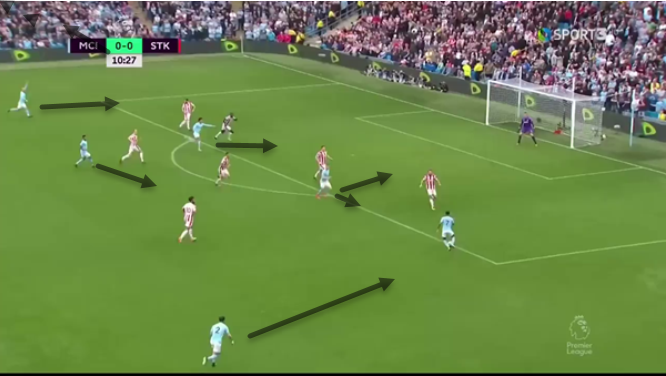 With David Silva and Kevin De Bruyne pulling the strings in midfield, City were a joy to watch, typified by the sixth goal, where De Bruyne played a perfectly-weighted pass into the path of Leroy Sane to fire under Jack Butland in the Stoke goal. Most of the goals were full of quality as City really turned on the style. Quick interchanges and plenty of movement off the ball when going forward must be a total nightmare for opposition sides to contain. In the absence of Aguero, Gabriel Jesus continues to deliver. City’s performance was exactly what United’s was not: full of life.

Based on these two matches, City will be the undisputed kings of England come the end of the season. But of course, we all love football because it throws up so many surprises, and there are undoubtedly plenty of twists in the plot to come. Both Manchester teams are likely to be in contention come May, with defending champions Chelsea generally regarded as the third team who could potentially win the league. However, from a neutral’s point of view, it is clear after the weekend’s fixtures which team will be more enjoyable to watch.