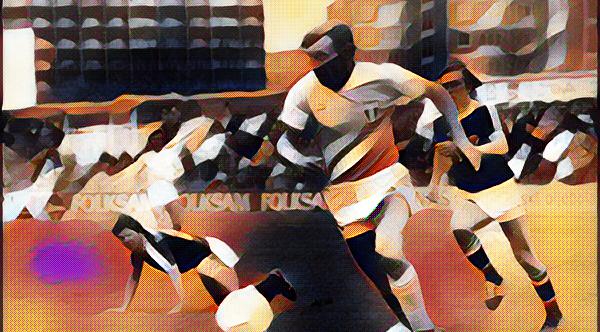 When people think about Malmö FF they normally think about Zlatan Ibrahimovic. But there is one player that, for many Malmö supporters, is bigger than Zlatan himself.

In 1944 Malmö, Sweden – Bo “Bosse” Larsson was born. While the Second World War was beginning to reach the end, Sweden were one of those countries which weren’t involved in the War. Not to say they weren’t affected by the war – they had their rationing and there was lack of some products in the stores.

Malmö was at this time a typical working-class city. The biggest company that held the most number of employees were “Kokums mechanical workshop” – which had more than 5-thousand workers. One of these people were, Nils Larsson, Bosse Larsson’s father. Bosse grew up in the neighbourhood of “Kirseberg” in an apartment on Rosendalsvägen 11. Many of the kids in the neighbourhood loved to play football on the streets and Bosse was no exception.

“Well, it was perhaps not so surprising that I would end up with football since I’ve played with one almost every day since I could walk.”

Bosse’s father Nils was also very interested in the game and loved to see his kid playing football. He was also the person who brought Bosse to Malmö Stadium to watch Malmö FF play games. Malmö was the beloved team of his father and would soon become the same to Bosse himself. He soon started to play for the academy team in Malmö FF and worked his way up. One day the current coach of the first team, Pepi Stroh, saw Bosse in action and said: “This kid is going to be the new Ocwirk”. He was referring to the famous midfielder at the time in Austria, called Ernst Ocwirk.

He made his debut for the first team in Malmö FF on the 8th of May 1962 at the age of 18. Malmö were facing Flamengo from Brazil, who was on one of their World Tours. The game started well for Bosse and he scored after only 20 seconds. Flamengo recovered and turned the game around – winning the game with 5-1. But Bosse was the man on everyone’s lips. In the local newspapers, they wrote that “The most satisfying with this exhibition game was the fact that Malmö has found a new star”.

Before he was started to collect trophies, he was going to meet up with Malmö’s new manager in 1964, Antonio Durán. Durán would later go on to become one of Malmö’s greatest managers of all time. Bosse remembered the first meeting with the new manager.

“It was straight to business. The handshake and polite greeting were fast dealt with. Then we went out to the training pitches and Durán gave us instruction to start running. We ran through the Park and it wasn’t until we had reached the City Theatre that we turned around again. And it wasn’t the shortcut we took back home again. All the players were exhausted after the training session. We weren’t used to this kind of physical training. “

One year after Durán’s appointment as manager, the first title came. In 1965, Bosse won his and Durán’s first championship with Malmö and that same year Bosse won the prize for the best Swedish footballer, called “Guldbollen”. In 1966, he was transferred to the German side VfB Stuttgart. Stuttgart became a topside after Bosse had arrived in the club and even Franz Beckenbauer were impressed with the Swedish goal scorer. In 1969, he was selected the number one sportsman in Stuttgart. Something that witness about exactly how much they liked him in Germany. But even though he was popular in Stuttgart, Bosse and his wife didn’t like the lifestyle and got homesick. So, in 1969 he was back in Malmö again. There he won the Swedish Championship an additional of five times during the 70s. He also won the Swedish Cup four times and won “Guldbollen” one more time. To win that prize two times was very big since no one before him had managed to do that. Zlatan has eleven now but that’s a whole other story.

Before the season of 1970 he scored 10 goals during the preseason and said when the season was going to start that he was aiming on scoring at least one goal in every game during the whole season. The season ended well and Malmö became champions again. They finished the league with one point ahead of Åtvidaberg. After the title was secured Bosse was interviewed by the press and they asked him what the differences was between this season and the seasons in Stuttgart.

“In Stuttgart, I played in the midfield. I had a different role. That was in a team that didn’t have a chance on winning the title. They tried to tempt me to stay with big bonuses but I’m not much for money. What is money compared to being satisfied with your life?”

In 1970, he was a part of the Swedish team that travelled to the World Cup in Mexico. It didn’t go very well for Sweden in that tournament and they went out after the group stage after losing against Italy and drawing against Israel. The only goals that Sweden scored was from Ove Grahn and Tom Turesson. He played a total of 70 games for the Swedish national team and scored 20 goals.

1971 was another good season for both Bosse and Malmö FF. They won the league and Bosse was so good that some journalists wrote that he was good enough to play for Benfica. The following years would invole a lot of trophies and two more World Cup’s with the Swedish national team. Bosse missed the final of the European Cup in 1979, where Malmö lost with one single goal against Nottingham Forrest, due to an injury. He then spent a short period in Trelleborg before he finished his career. Bosse has never been much for the attention. He has almost never visited a Malmö game after his playing days were over and instead his main interested has been horse racing. But for many Malmö supporters, he is still the biggest player Malmö has ever had. Born and raised in the city of Malmö he will always be very popular among the people of Malmö.