Skip to content
16 Comments on Blackburn Rovers boycott? I can’t do itPosted in English, Rants By By Far The Greatest TeamPosted on August 29, 2012October 2, 2012Tagged Blackburn Rovers, Championship 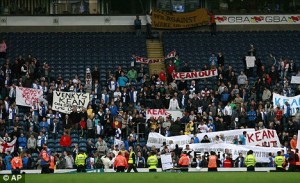 It won’t have escaped many people’s attention that there is something of a circus going on at Blackburn Rovers Football Club. Not an actual and literal circus of course, we’re a little short of elephants, ringmasters and trapeze artists for that sort of extravaganza. Although we’ve certainly got enough clowns for one.

And we’d probably take that sort of entertainment and light hearted tomfoolery over the metaphorical equivalent the fans of the club are currently suffering and have continued to endure over the course of the last 22 months.

If you’re a football fan you’ve probably seen the unfolding developments at Blackburn Rovers, the club I support, by now – Foreign chicken and pharmaceutical giants buy football club, promise the earth, deliver a fraction of this, sack respected manager, replace him with slightly less respected manager, he promises the earth, delivers a fraction of this, Ronaldinho and David Beckham are touted as signings, David Goodwillie and Radosav Petrovic are bought in as actual signings, best players are sold, untruths are told, relegation is suffered, tears are shed, and throughout, fans are up in arms at being led a merry dance and not having a proper explanation for the mess created.

Even worse, the fans are held up as a scapegoat for sending the club down whilst the real villains use the media to play the victims.

And with a new season brings a new problem. Once loyal fans and die hards are no longer coming to see their team. Those who once committed their precious time and limited funds to follow a cause they believed in have become so sick and tired of the people running the club that they stay away. They’d rather not give any further money to fund an operation they see as a farce and that’s why you’ll see Rovers with quite a comparatively large away following this season – they’re going to the away games as a way around giving the owners money.

Even the more casual and elderly fan no longer comes to support the Rovers because the fun has been sucked out of the experience. The atmosphere at Ewood Park last season was horrendous and the negativity on all four sides of the ground was tangible and very noticeable. Why would you go to the game? Where is the enjoyment in seeing truck loads of abuse and an increasingly poor standard of management/football generating a cauldron of hate?

They’ve seen worse days – back when we were languishing in the Old Divison Three. It’s not the relegation and the lack of glamour that’s a problem to them, it’s the lack of trust they can extend to the people in charge and the overriding fear of another Saturday listening to disgruntled fans barrack a manager who just doesn’t care what anyone else thinks.

Blackburn Rovers first two home games of the Championship season produced gates of sub-14,000 attendees. That’s the two lowest gates in over 20 years and even back then that was when half the ground was being rebuilt under Jack Walker’s dream. For a club that normally attracts attendances of around 20,000-23,000 it’s a sign of unrest and of mass exodus.

Right now there doesn’t appear to be a sensible way out of this mess. We could end up being Pompey version 2.0, or we could end up being passed to another owner who’s sole interest is themselves after having the funds and the assets withdrawn from us. We could even end up back in the Premier League with a proper club infrastructure and a manger who doesn’t sit there tooting the company horn without the action following to back it up, but that seems a stretch of the imagination I can’t fathom right now.

The evidence of this carefully thought out, individual choice boycott is plain and easy to see. I’ve read two articles in the recent past which clearly underline the thinking behind the “boycott” – one from Football 365’s Matthew Stanger and one from lifetime Rovers fan Michael Taylor on the Marple Leaf Blog, both clarifying their unhappiness and disgust at the way Venky’s run the club and the atmosphere that is generated as a bi-product of that. The useless bullshit machine that is Steve Kean is still manager, the club has fractions in administration and on the training ground, there is just no light at the end of the tunnel. Why should these likeable and thought conscience people go to Ewood Park?

I respect their views and they have my support as every fan of our club does. The problem in my own head is that I just can’t do it, I can’t stay away. I’m a Blackburn Rovers addict and I intend to stay strong no matter how bad the situation gets.

I believe in backing my team and I’ll continue to do so even against what a lot of straight thinking people would call better judgement, my stance has a lot of holes and pitfalls in it, I accept that, but my love for my team overrides all of the nagging doubts and principles that come with supporting the boycott.

I’ll still buy my tickets and my shirt and go to the games on match days because I want to watch my team play, I still enjoy the banter and I live in hope that the good days will return. I’m not talking about a Premier League trophy or a glorious European run, I’m talking about a time in the future where fans of Rovers can stand in the pub on a Saturday or weekday night and talk about football.

Like many other Rovers fans, I’ve taken a heap load of criticism and abuse from fans of other teams. I’ve even sat by and seen my club ripped apart whilst trying to keep a straight face and an objective view, many have buckled and I don’t blame them for a second but I’ll still keep going. I don’t believe in quitting just because things are hard. I’m born of the train of thought that you only get one football team in this life and I’ll stick with mine until the bitter end.

I guess you could call this riding the storm out, I’ll go to games, I’ll support the players and the team like I always have done because in my own head I know what’s going on at Ewood Park is wrong. I shouldn’t be endorsing or even be seen to be abiding by a regime that doesn’t give a damn about me.

But my mindset is that I’ll be here for many years to come, long after Venky’s and their propaganda producing backers have gone. You’ll see me in the stands this season and that stance won’t change, it’s the type of stoic loyalty that only some would understand. Am I right to feel this way? That’s down you I guess.

As my Father-in-Law once said to me sat in the car park, freezing and unable to feel my feet after a 0-2 loss to Stoke on Boxing Day two seasons ago, “I signed up for the life ticket.” And he’s right. Foolishly, I did as well.