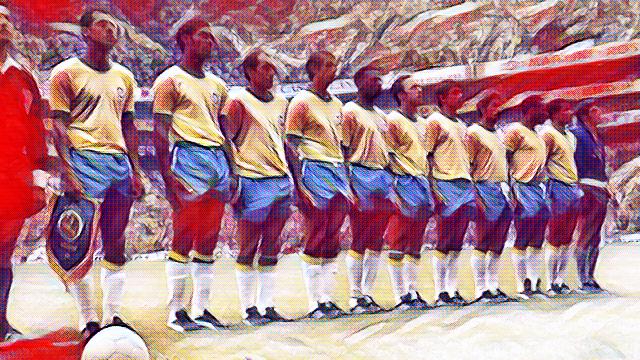 The Brazilian national football team has qualified for every FIFA World Cup, winning the tournament on five occasions, more than any other national football team. Their record in the Olympics, however, has not been nearly as good. They have been inconsistent in qualification, with second-place being all they could manage until 2016, where they finally won gold. In recent years, the team has suffered in the competitions where their senior players were either limited in participation due to registration rules or club competition commitments.

There has been a distinct difference between the composition of the teams that participated in the 2014 World Cup, and the 2016 Olympics. For the World Cup, there is no age limit for players participating, which means the team can play at its full strength and with its best players. The Olympics has an age limit of 23 years old, with the special exception of three players over that age allowed on each team. This means that the team each nation brings to the Olympics will feature a lot more future stars, and potentially not a full roster of the senior teams starting players that might play in the World Cup

One of the best players in the history of football, and arguably Brazil’s most iconic player, Pelé, played in four different World Cups for Brazil from 1958-70, winning three of them. It was one of the greatest periods of Brazilian national football, and the teams that won them are distinctly different from the team of today’s Brazil. For each of the four World Cup teams Pelé played in, there was not a single player who played outside of Brazil on the team. Now, while I realize that globalization had not taken its full hold of the world and it wasn’t very common for players to play outside of their birth nation, there were many players who played outside of their nation of birth on other national teams. Brazil was a highly effective football association back then, and their dominance in the World Cup showed that.

The same cannot be said for the national team nowadays. While they are certainly still a team to be reckoned with, they haven’t won a World Cup since 2002, and have only won one other besides that since 1970. Their under-23 team did win gold in the 2016 Olympics, and that could be the signal of future change for the program.

The team that played in the 2014 World Cup had only four out of the 23 players listed playing in Brazil, with the rest playing abroad. This is not altogether a bad thing, it just represents a potential lack of unity that might be present in a team that played in the same league together, even on the same team. All that is not to say that the team lacks in unity, simply that it is comparatively lesser to that of the teams that Pelé played on. Of the regular starting XI for the team during the tournament, Frederico Chaves Guedes, or simply Fred, was the only player who played in Brazil. Post tournament, Fred confirmed his retirement from international football following poor performances and a lack of call-ups following the departure of head coach Luiz Felipe Scolari.

This means that one of the 23 players from the 2014 World Cup team that played club football in Brazil is no longer present with the team. Of the players in the World Cup squad, the 25-year-old forward from Barcelona, Neymar, was the only player to feature in the 2016 Olympics, where he filled one of the 3 (older player) spots and captained the team.

The 2016 Olympic squad for Brazil featured only five players from abroad in the 18-man squad. This shows a glimpse of the potential future for the Brazilian squad, though if you look at past examples as evidence, you’ll probably assume that most of those 13 players still playing in Brazil will be playing abroad by the time the 2022 World Cup comes around, if not the 2018 World Cup. Two of the players who were playing in Brazil during the 2016 Olympics are already playing in Europe, with several more looking to be on their way this summer.

With these tendencies so wide-spread, one must question whether this is killing the identity of Brazilian football? I would argue that given the consistency of these player’s early careers being spent playing Brazilian styled football in their homeland, they carry the spirit of Brazil’s game and evolve it into something more diverse and interesting to watch. This then begs the question of whether an evolved form of Brazilian-football from the time of Pelé is even Brazilian football. The answer lies in the fact that Pelé popularized the Brazilian style of football to the rest of the world, which has been trying to emulate and better the technical, graceful, and successful style of football leading to the game that we all watch today. This can only be construed as a good thing for those of us who are fans of not only Brazilian football, but also football around the world.

Aspiring football pundit/writer trying to make a name in this big world. @FM_Report