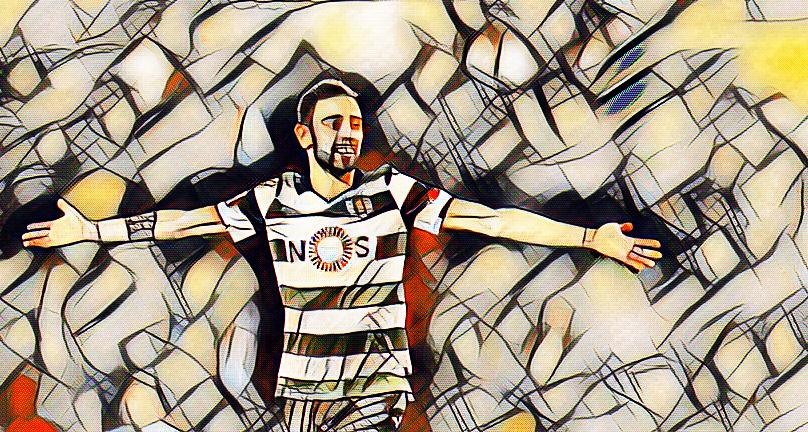 Atletico Madrid have breezed past any opposition they have faced in the Europa League this season, since dropping down from the Champions League. Their first opponents were Copenhagen, who they beat 5-1 on aggregate, a result which was followed by an 8-1 hammering of Lokomotiv Moscow over two legs. They should have a much larger challenge in the next round though, as they face Sporting Lisbon in what has been dubbed the Iberian Derby. The Portuguese outfit possess the talents of Rui Patricio, Fabio Coentrao, William Carvalho and Bas Dost, but the man Atleti really need to keep an eye on is Bruno Fernandes.

The 23-year-old midfielder, who has recently been linked with a move to Tottenham Hotspur, has clocked up three goals and three assists in four Europa League matches, often becoming Sporting’s saviour. In the opening leg of their Round of 32 tie against FC Astana, Sporting found themselves 1-0 down after an early goal from Marin Tomasov. However, Bruno Fernandes converted a spot kick to level the scores and following a strike from Gelson Martins, burst down the left side, before cutting the ball across to Seydou Doumbia, who converted to give Sporting the lead going into the second leg. In the reverse fixture, Fernandes then added two more goals, including a sensational strike from range which sailed into the top corner. It was these goals which ensured that late goals from Patrick Twumasi and Dmitri Shomko were not enough to get the Khazak side back into the running to go through, as the game finished 3-3 and the tie ended 6-4 on aggregate.

Next up for Sporting were Viktoria Plzen. Fredy Montero had opened the scoring, before Bruno Fernandes raced through and laid the ball off to the Colombian striker, who dribbled his way past the last defender and converted for his and the game’s second goal. Despite taking a 2-0 lead into the second leg of the tie, Sporting gave themselves a scare as they allowed Marek Bakos in to score twice, taking the game to extra time. However, they did manage to scrape through with a win, as with a minute and a half of injury time gone in the first half, after just one had been signalled, Bruno Fernandes whipped a corner towards Rodrigo Battaglia at the front post. The Argentinian defender jumped highest and headed the ball towards the far corner, just out of Plzen goalkeeper Ales Hruska’s reach, securing the win for Sporting.

Throughout the four games Sporting have played, they have scored nine goals, with Bruno Fernandes directly involved in six of them, which highlights just how important the Portuguese star has been. This form, alongside his impressive league performances -featuring eight goals and five assists in 25 games- have seen the classy playmaker earn his first four caps for Portugal, with his debut coming in a 3-0 friendly win against Saudi Arabia. His only goal contribution to date for his country came via a cross field pass which assisted Vitoria Atunes’ equaliser in a 1-1 draw against USA, though that goal was helped greatly by calamitous goalkeeping from Ethan Horvath.

Fernandes had started his career in the youth ranks at Boavista, but before his move to Sporting Lisbon, he had represented multiple teams in Italy. His initial move across the continent was to Novara, but he also played for Udinese and then Sampdoria before moving back to his native Portugal and joining Sporting. This is only his first season with Lisbon, but he has already become an integral part of their team, especially in the Europa League.

Sporting dropped down to the Europa League after finishing third in a Champions League group featuring Barcelona, Juventus and Olympiacos. Their upcoming fixture against Atletico Madrid will be by far their biggest test in Europe’s secondary competition, as they aim to keep the likes of Antoine Griezmann at bay, while breaking down a defensive line including Juanfran and Diego Godin. If they are to navigate their way past the Spanish giants, one person they will be looking to is Bruno Fernandes. He’s already been Sporting’s saviour in their two previous ties, he will undoubtedly be seen as a hero if he is able to help his side get over this hurdle.