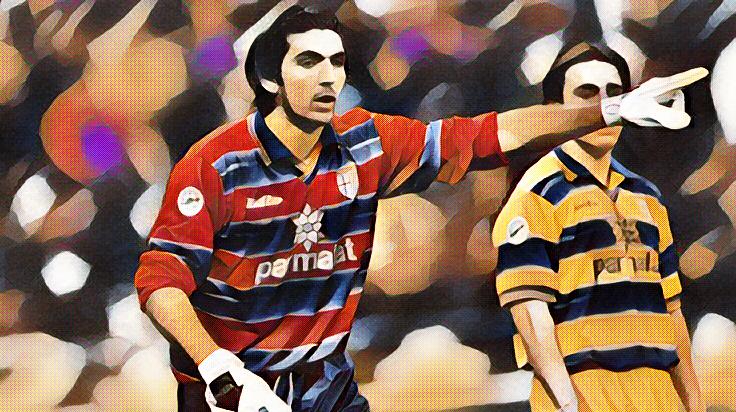 The eternal Gianluigi Buffon has announced that at the end of this season, he will retire from football. The Italy and Juventus captain has won almost everything there is for him to win in his storied career, which began back in the 1990s at Parma, where he won two Coppa Italia’s and two UEFA cups. Two of those trophies came in as a double in 1999, won by a squad where Buffon was surrounded by fellow eventual legends of the game, including Lilian Thuram, Fabio Cannavaro and Hernan Crespo. That Parma team boasted players who would go on to help define the forthcoming decade of European football, and for them Parma and the double win of 1999 was their springboard to greatness.

The 1999 season would prove to be Parma’s pinnacle after a decade in which they saw the greatest prolonged period of success in history of the club. Parma had had a chequered history, liquidating in 1968 (financial strife a recurring theme throughout the club’s history) and spending much of their time existing in the lower reaches of Italian football, only being promoted to the Serie A for the first time in 1990. The club’s major stakeholders, Parmalat, whose name adorns those iconic yellow and blue shirts, pumped money into the club, looking to improve Parma’s standing in Italy and across Europe.

They were duly rewarded, with Nevio Scala at the helm they won a Coppa Italia, a Cup Winners Cup, a Super Cup and a UEFA Cup all between 1992 and 1995. Serie A was the dominant league in European football, and Parma were competing at the very top. Scala left the club in 1996 and was remembered as a legend, bringing major trophies to Parma for the first time in their history, all while playing attractive football. In stepped Carlo Ancelotti, who began to build the team who would triumph in 1999. In his first summer in charge he signed Lilian Thuram from Monaco and Hernan Crespo from Buenos Aires, the latter being highly sought after following his performance for Argentina in the Olympics, where he picked up a silver medal having finished top scorer with six goals.

Ancelotti progressed Parma further in the league, finishing a record highest of second behind Juventus in 1997, meaning the club qualified for the Champions League for the first time in their history. The next season was not so fruitful, with Parma only finishing sixth and exiting the Champions League in the first round. Ancelotti’s decision making was questioned as well, having gotten rid of Gianfranco Zola and Hristo Stoichkov, as well as turning down the chance to sign Roberto Baggio, because he felt they would not suit his tactical plans. He was subsequently sacked in 1998, Alberto Malesani brought in to replace him. He added another player whose name resonates around Europe, Juan Sebastian Veron, from Sampdoria following his impressive showing in the 1998 World Cup.

Malesani’s Parma lined up in the very en vogue 3-5-2 which was so prevalent in 90s Italian football, different to Ancelotti’s 4-4-2 system, inspired by Arrigo Sacchi. In goal was Buffon, who had come through Parma’s ranks and had been a first-team fixture since 1995. The back three was made up of Lilian Thuram on the right, Roberto Sensini in the middle with Fabio Cannavaro on the left, who had joined the club in 1995 from his hometown club Napoli. The midfield was composed of two sitting midfielders with one ahead of them and two wing backs. Dino Baggio, brother of Roberto, and Alain Boghossian took up the holding midfielder roles, Boghossian arriving alongside Veron from Sampdoria in 1998. Veron played in front of these two, in more of a number 8 role, bringing the ball forward and dictating the play, and the two wing-backs were Diego Fuser on the right and Paolo Vanoli on the left. Up front, Hernan Crespo was partnered by Enrico Chiesa, a man not widely known outside of Italy but with a fearsome reputation, who Fabio Capello once described as a “complete forward”.

Gianluigi Buffon has been a stalwart of Italian football for as long as most fans can remember. Gigi is considered by many to be the greatest goalkeeper of all time, the Champions League being the only trophy that has eluded him in his illustrious career. Whether he is barking orders at his defence; belting out the Italian national anthem; or weeping with joy after winning the World Cup, he exudes passion in everything he does, the embodiment of Italian machismo, a leader of men. He made his professional debut for Parma in 1995 under Scala at the age of 17, up against AC Milan, who boasted an attack including Roberto Baggio and George Weah. Buffon kept both Ballon d’Or winners at bay as Parma held Milan to a 0-0 draw, making a particularly impressive save from a point-blank Baggio header. Buffon had made his mark, and 22 years later, remains.

Parma began their 98/99 UEFA Cup campaign with a two-leg first-round victory over Turkish side Fenerbache. They lost the first leg 1-0 in Istanbul, but restored parity back in Italy, winning 3-1 thanks to an own goal, one from Crespo and one from Boghossian. They advanced past Wisla Krakow and Rangers in the second and third round to set up a quarter-final clash with Bordeaux. The first leg was in France, where they lost 2-1, Hernan Crespo grabbing a late away goal. The return leg in Italy had the potential to be a nervy affair, although Malesani saw to it that any fears were put to bed, as Parma thumped the French side 6-0. Crespo and Chiesa demonstrated the lethality of their partnership, grabbing two goals apiece. Chiesa’s two goals were the pick of the bunch, his first a long-range drilled strike after controlling a long ball from Baggio, the second using his electric pace to latch onto a pass from Crespo, leaving the centre-backs in his wake before slotting through the keeper’s legs.

That strike partnership was key to Parma’s success, but they were only afforded such freedom due to their resilient defence. A back three with Lilian Thuram and Fabio Cannavaro verges on the stuff of footballing fantasy, however, for Parma it was a reality which they reaped the rewards of. Lilian Thuram signed from Monaco in 1996, comfortable playing both centre-half and right back. Tall, strong and superb reading of the game made him an ideal centre-half, however, his monstrous pace and technique meant he excelled at right back too. Parma played him on the right-hand side of a three-man defence, in which all his attributes were utilised to devastating effect.

Fabio Cannavaro on the other hand, standing at 5’9, did not appear a typical centre-half. However, his defensive pedigree was evident in his early days at Napoli. During one training session, while still in the youth team, Cannavaro leapt into a meaty slide tackle on none other than Diego Maradona. Players and staff were furious – how dare this youngster fly in like that on Diego, a god in Naples? Maradona himself though was impressed. He defended Cannavaro, the boy should be encouraged with this bravery. Ever since then, Cannavaro showed that same tenacity, paired with his exceptional reading of the game, pace, and technical ability to become one of the greatest centre-backs in history. His high point was captaining Italy to a World Cup win in 2006, subsequently winning the Ballon D’Or that year, the first defender since Franz Beckenbauer to do so. So, with Cannavaro and Thuram either side of the experienced captain Roberto Sensini, Parma had a defence to rival any in Europe.

After demolishing Bordeaux in the quarterfinals, Parma faced Atletico Madrid in the next round, who too proved to be light work for the Italians. A 3-1 win in Madrid thanks to a brace from Chiesa and one from Crespo, followed by a 2-1 home win sent them through to the final in Moscow. They were up against Marseille, who denied Parma the chance of an all Italian final having dispatched Bologna in the semis.

Parma’s squad was at full strength, Malesani’s first XI out in the 3-5-2 formation. Marseille were not so lucky, a hot-tempered second leg against Bologna followed by a tunnel bust-up had left them without Fabrizio Ravanelli, Christoph Dugarry and William Gallas. Marseille were cautious in the opening stages, knowing full well the attacking power of Chiesa and Crespo, playing mostly in their own half. On 25 minutes, their caution proved correct as Crespo broke the deadlock, pouncing after Laurent Blanc misjudged a pass from Veron, before producing a sumptuous lob over Stephane Porato to make it 1-0.

Ten minutes later, Parma struck again. Thuram received the ball inside Marseille’s half, and fed it down to Fuser on the by-line, who whipped a cross to the back post where his opposite wingback Vanoli thumped a header home to double their lead. Five minutes from the hour mark it began again with Thuram, who surged forward with the ball down the right, playing it to Veron on the touchline. Veron took a touch, and chipped the ball into the box. Crespo went for it and dummied, leaving it for Chiesa, who unleashed a thunderous volley into the top corner. The game was won, Parma comfortably saw the game out and for the second time in four years, were UEFA Cup champions.

That Parma side were dismantled almost completely in the summer following to Serie A rivals who were splashing the cash – Veron and Crespo transferred to Lazio, Crespo going for a then record fee of £35million. Thuram and Buffon both departed for Juventus, Buffon remaining the most expensive goalkeeper in history at £33million until summer just past, when Man City signed Ederson. Cannavaro remained for a few more years before departing for Inter.

Parma’s plight since then has been well documented, in 2015 they liquidated and were demoted to Serie D, left again to become a feature of the Italian lower divisions. Last season the club did secure back to back promotions and now find themselves in Serie B, just one more successful campaign away from the big time.