Following the dreadful events in Dortmund midweek, this weekend’s game took Frankfurt by surprise. Dortmund played with no fear and put the events behind them as they smashed Frankfurt 3-1. Goals came from long absentee Marco Reus, Sokratis and Aubameyang, Frankfurt were level at one stage with a goal from Marco Fabian, but it wasn’t enough as BVB easily overpowered them.

Leipzig seized their opportunity to catch Bayern with a 4-0 hammering over the masters of overachievement, Freiburg. Goals came from Yussuf Poulsen, Timo Werner Naby Keita, with Diego Demme sealing the tremendous win.

Augsburg, who are still looking worried at the bottom of the table, pulled out a vital win in front of their home fans against FC Koln. 2-1 was the final score as the goals came from Martin Hinteregger and Paul Verhaegh, while Koln pulled one back through Augsburg’s own Philipp Max.

A six-pointer at the bottom again and Wolfsburg took all three points against struggling Ingolstadt. It finished 3-0 and the Wolves looked very good. Markus Suttner (own goal), Yunus Malli and their hitman Mario Gomez got the goals to seal another precious win, yet it was a disaster for Ingolstadt following their tremendous comeback last week.

A goal fest between Hoffenheim and Gladbach saw both sides level at 2-2 at the break, yet Hoffenheim took the points as they put another three past Sommer. Gladbach pulled another back but it wasn’t meant to be. The Hoffenheim goals came from Adam Szalai (2), Kerem Demirbay (2) and Mark Uth, while Jannik Vestergaard, Lars Stindl and Mahmoud Dahoud were on the score sheet for Gladbach.

After me writing off Mainz saying that I couldn’t see them getting another win this season, three massive points came in the form of an own goal from John Brooks. I couldn’t see Mainz beating Hertha but it happened. Hertha have been a little inconsistent recently but this win will hopefully inspire the Mainz players that they can actually survive.

Bayern couldn’t get a result against Leverkusen, and following their defeat midweek to Real Madrid, that’s three defeats from four for the Champions. The door is open now for Leipzig to try and catch them with five games to go, can it be done or will Bayern have the credentials to finish it off?

Werder Bremen’s stellar form continues as they came from behind against fellow strugglers Hamburg. Michael Gregoritsch put HSV into the lead, who were in control for the most part of the game until Bremen started to take control as Max Kruse equalised before half time. Florian Kainz got the winner on 75 minutes and this fantastic run goes on. Bremen are now up to 8th!

Darmstadt have given themselves and their fans a glimmer of hope following a last minute winner against Schalke. It still may not be enough and they are in need of a miracle but they are not going down without a fight. For Schalke though it continues the trend of a poor season. Mario Vrancic put the hosts ahead but it was levelled up by Coke on 75 minutes. In true storytelling ways, Jerome Gondorf scored in added time to give Darmstadt three massive points in their dream for survival! Five games to go, can they do the impossible?! 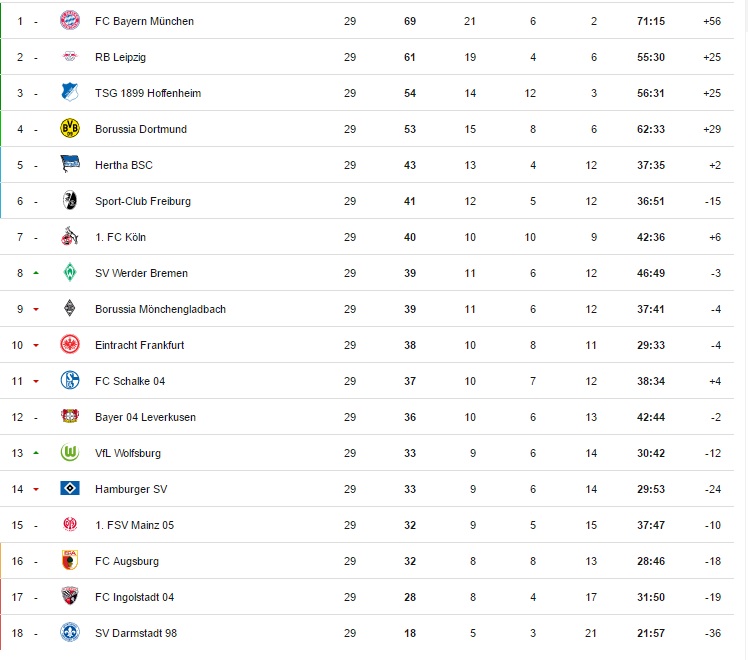