The opening game of the weekend saw FC Koln take on the high flying Hoffenheim, with Julian Nagelsman’s men only needing a point to guarantee European football next season. With the 29-year-old on the lips of all pundits and journalists at the minute due to the transformation under his reign, he deserves all the plaudits with his imaginative brand of football and getting the best out of Andrej Kramaric, Sandro Wagner and Kerem Demirbay. Demirbay got the last minute equaliser and confirmed European football next year. It came following Leonardo Bittencourt’s opener on 58 minutes, which looked enough until Demirbay snatched it at the end.

Two weeks ago I predicted that I couldn’t see Mainz winning again due to their torrid run of form and if I was to predict a result at the Allianz against Bayern, well it wouldn’t have been good for the carnival club. However, last week’s win over Hertha has inspired them and they were twice in the lead against the league leaders. Bojan Krkic and Daniel Brosinski with the goals, only to be cancelled out by Arjen Robben and Thiago Alcantara. Is this an opportunity for Leipzig to gain ground on Bayern?

Augsburg, who are still desperate for points down near the bottom of the table, were away to Frankfurt, and they took the lead on nine minutes thanks to Jeffrey Gouweleeuw, and hung on for what seemed an eternity. That was until a 12-minute collapse were Marco Fabian (2) and Ante Rebic stole the points from the helpless Augsburg. It finished 3-1.

A six-pointer at the bottom again and Darmstadt took all three points against fellow strugglers Hamburg, as it finished 2-1 which was definitely a shock for most. Aytac Sulu and Felix Platte got the goals for Darmstadt, and Fabian Holland turned the ball into his own net in added time but the bottom side held on for the points. Darmstadt’s dream of survival continues as that’s two wins on the bounce.

Bremen, Bremen, Bremen, how this season has turned around, as in the opening game they were made to look like school children are now on the verge of a European spot following another victory. The win was thanks to one man only, Max Kruse, who scored four goals in an emphatic 2-4 victory over struggling Ingolstadt. Ingolstadt took the lead twice thanks to Dario Lezcano and Pascal Groß, however, Kruse had other ideas. If Bremen get European football next season then Alexander Nouri has to go down as a serious contender for manager of the year.

The game between Hertha and Wolfsburg was a close game that could only be separated thanks to Hertha captain Vedad Ibisevic, whose goal gives Hertha a much-needed win after a few dodgy defeats.

The battle of the Borussia’s, Gladbach and Dortmund, went head to head at Borussia Park. The game was a cracker with Marco Reus opening the tie. Reus was in form coming back from his lengthy spell on the sick bed. Gladbach’s Lars Stindl levelled things up just before half-time and shortly after the break Gladbach were ahead thanks to Dortmund defender Marcel Schmelzer. On the hour, Pierre-Emerick Aubameyang equalised for BVB and with three minutes to go Raphael Guerreiro grabbed the win for Tuchel’s men. A good win following their Champions League exit.

Oh Freiburg, just when you can’t be surprised by them anymore, they come out with this. A 2-1 victory over a poor Leverkusen, who seem to have calmed down on the attacking front and now insist on passing it horizontally and not doing much with it. Nils Petersen broke the deadlock for Freiburg, but it was cancelled out by Kevin Volland. Then on 88 minutes, Pascal Stenzel becomes a hero as Freiburg snatch a late winner.

With Bayern dropping points again, Leipzig had a perfect opportunity to reduce the gap, and with four games left, these kinds of opportunities don’t come every week. This probably has to go down as an opportunity missed as Leipzig drew 1-1 with Schalke. RB took the lead thanks to their hit man Timo Werner. However, Schalke have a hit man of their own and although he isn’t as prolific in his advancing years, he still has an eye for goal; Klaas-Jan Huntelaar levelled the game just after halftime and held on, so Leipzig’s chance to close the gap slipped from their grasp.

The table is looking very interesting and with four games to go, the relegation battle looks like it will go right to the wire and could be one of the most exciting ends to the season of all time. European spots are still up for grabs. Bayern could win the title in the next two weeks if results go their way, or Leipzig will be snapping at their heels if it doesn’t. All I know is that I can’t wait for next week. 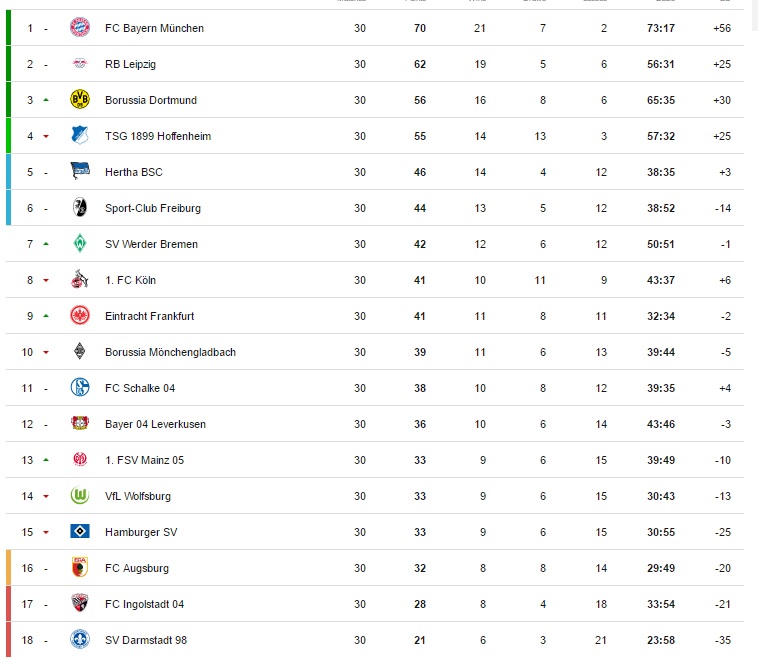