We are two weeks from the end of another fantastic campaign and this week provided everything you could want; a confirmed relegation, comebacks that you wouldn’t believe possible, results that leave a very tense final day for the relegation playoff spot and goals, goals, goals.

With all games being played on Saturday, we kick things off at Darmstadt; the already relegated side who are only playing for pride now and took on Hertha Berlin. Things didn’t start well for the home side as Salomon Kalou broke the deadlock after 14 minutes. Jordan Torunarigha doubled their lead on 28 minutes, and for poor Darmstadt, they hope to go into next season with more focus and confidence in an attempt for a swift return to the top flight, although the 2. Bundesliga is not an easy division to get out of.

High flying Freiburg took on relegation-threatened Ingolstadt in a clash that only a win would be enough to keep their safety dreams alive. Things were tough for Ingolstadt but they did show some fight, however, it was Freiburg that took the lead thanks to one of their prize assets; Maximilian Philipp. Dario Lezcano equalised for Ingolstadt just before half time and the game finished 1-1, which was enough for Ingolstadt as their fate was confirmed and they will be playing 2. Bundesliga next season.

Augsburg, deep in the fight to avoid the relegation playoff spot, had a huge task ahead of them with Dortmund standing in their way. This didn’t faze them and Alfred Finnbogason put Augsburg into the lead on 28 minutes. With major doubt over Thomas Tuchel’s future at BVB next year, his blushes were saved as hitman Pierre-Emerick Aubameyang levelled things up four minutes later. It stayed level and Augsburg go into the final day desperate for a result to keep their spot in the Bundesliga next season.

Clash of the titans now as RB Leipzig took on the Champions Bayern, in a game that had more action than a Tom Cruise movie. Marcel Sabitzer put Leipzig one up within two minutes, a cracking start, but it was cancelled out on 17 minutes by the Bundesliga’s top scorer Robert Lewandowski. Leipzig were back in front on 29 minutes thanks to their top scorer Timo Werner, and Leipzig took that lead into the break. A rapid start to the second half saw Yussuf Poulsen extend RBL’s lead. Thiago Alcantara pulled one back for Bayern on the hour mark, but it didn’t last long as Timo Werner restored Leipzig’s two-goal advantage just five minutes later. What happened after that however proved why Bayern are Champions and deservedly so. Robert Lewandowski pulled things back to 4-3 in the 84th minute, surely they couldn’t, could they? We entered stoppage time and arguably the best left back in the world, David Alaba, levelled the game on 91 minutes. Arjen Robben topped off the impossible comeback in a year that has seen its fair few, as on 95 minutes Bayern took all three points in an amazing 4-5 comeback win.

Hamburg took a trip to the Veltins to take on Schalke in an attempt to escape from the relegation playoff place. However, a 1-1 draw wasn’t enough to change things. Guido Burgstaller opened things up for Schalke, but Pierre-Michel Lasogga gave HSV that glimmer of hope going into the final day with the equaliser in the 92nd minute, didn’t they leave it late!

Leverkusen came back from being two goals behind to snatch a point away to Koln, but they are not safe yet. Milos Jojic and Lukas Klünter put Koln into the lead but Leverkusen were saved by Stefan Kießling and young talent Joel Pohjanpalo, who took the Bundesliga by storm during the opening weeks of the season, and so it was good to see him back on the score sheet. Bayer will need him going into their final game as the worst could still happen.

Another thriller as Werder Bremen took on Hoffenheim, and the away side shocked German football when they went 0-5 up after 51 minutes, with goals from Adam Szalai, Steven Zuber, Ermin Bicakcic and a brace from Andrej Kramaric. That’s when Bremen decided to turn up and Theodor Gebre Selassie pulled one back, followed by a late flurry from Philipp Bargfrede and Robert Bauer, but it wasn’t enough and things finished 3-5.

Mainz pulled off probably their most important comeback ever against Frankfurt as Branimir Hrgota and Haris Seferovic put the away side 2-0 with 40 minutes left to play. Mainz then turned it on at the hour and within two minutes were level thanks to Jhon Cordoba and Stefan Bell. Mainz then took the lead on 76 minutes when Yoshinori Muto struck home. Pablo De Blasis completed the victory in stoppage time as it ended 4-2.

The final game saw Gladbach take on Wolfsburg, who themselves were in need of a win to shake off any relegation threats, but that win unfortunately for them didn’t come. Jannik Vestergaard put Gladbach ahead on 24 minutes but it was cancelled out by Wolfsburg’s main man, Mario Gomez, just think where they’d be without his goals. It finished 1-1 and Wolfsburg are now still in the thick of it going into the final game.

With one game left to play, all that is left to confirm is the Europa League places and who ends up in the relegation playoff spot. It’s two from three for Europe and one from five who could end up in that drop zone, with Hamburg looking favourites to end up there. All we know is that the final week is going to be a very exciting one. 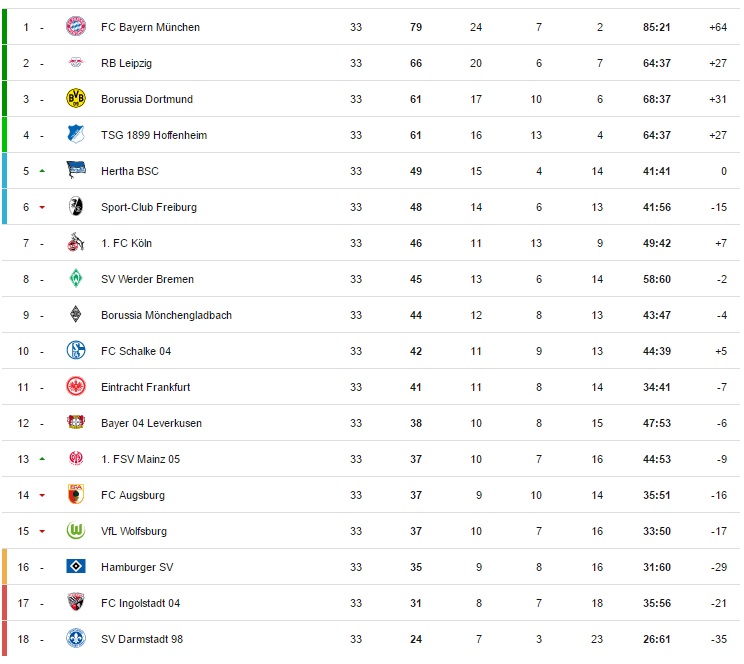