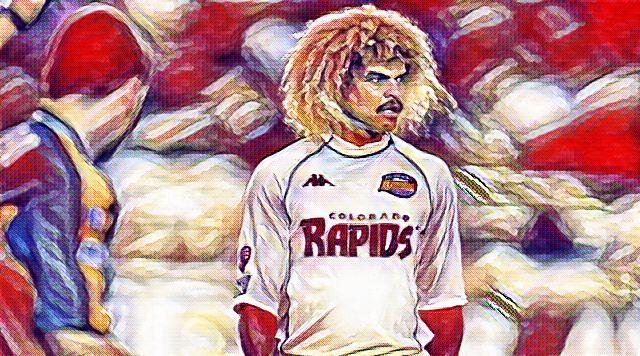 When we hear the name Carlos Valderrama, we all think of his long blond hair playing for Columbia in the 1990, 1994 and 1998 World Cups, sauntering around the midfield pinging passes all over the pitch.

He is Colombia’s all-time leader in caps with 111, scoring 11 goals, and had a successful career not just in Colombia but also in Europe. Valderrama turned out for Montpellier and Real Valladolid.

But where Valderrama really shined was his MLS career. His US adventure started in 1996 with Tampa Bay Mutiny, and in his first season, he won the first ever Supporters Shield and Most Valuable Player award. Valderrama finished the season having scored four goals and an impressive 17 assists as he took the Mutiny to the MLS play-off semi-final before being knocked out by eventual winners DC United.

The following season was a mixed bag for the Colombian international, as he played for the Mutiny as well as on loan to Colombian side Deportivo Cali.

On his return to the US before the 1998 season, Valderrama joined another MLS side, this time Miami Fusion. He stayed at the Fusion for two seasons playing in 24 games and scoring three goals, before moving back to Tampa Bay Mutiny.

It was with Tampa Bay that Valderrama seemed most at home and the fans loved him.

The 2000 season was a great season for Valderrama, as he managed an unbelievable 26 assist, which still to this day is an MLS record. Tampa Bay reached the MLS play off’s again only to be knocked out by an impressive LA Galaxy in the quarter-finals.

In 2001, he spent the first part of the season with the Mutiny, playing in 12 games, although he still managed six assists. Valderrama then joined Colorado Rapids, again playing in 12 games. In his final season in the MLS with the Rapids came in 2002. The Colombian was as ever in great form as he played 27 matches, scoring one goal and 16 assists as the Rapids made the semi-final in the play-offs before eventually being knocked out by LA Galaxy. It was a great season for Carlos Valderrama however as he signed off not just his MLS career but his career as a whole in style.

When he played, he was the star of the show. Valderrama currently still lies in second place in the all-time MLS assists with 114.

The Colombian made in total 175 MLS appearances, scoring 16 goals and a staggering 114 assists.

He was such a strong player in the centre of midfield with extremely quick feet. His passing range was at times unbelievable and with fantastic technical ability, Valderrama was a class MLS player.

At times he was played as an attacking midfielder but the playmaker was most effective playing in a deeper role in midfield, where he could use his passing to devastating effect.

He was not the quickest or the fittest, but his skill and ability to create chances more than made up for it.

With the MLS slightly slower pace, it meant Valderrama was perfectly suited to the league.

So next time you think about Carlos Valderrama, don’t just think about the large blond hair. Think about his ability, his range of passing and how he could make something happen out of literally nothing.

One of, if not the best Colombian player ever to grace a football pitch, and without doubt an MLS legend.