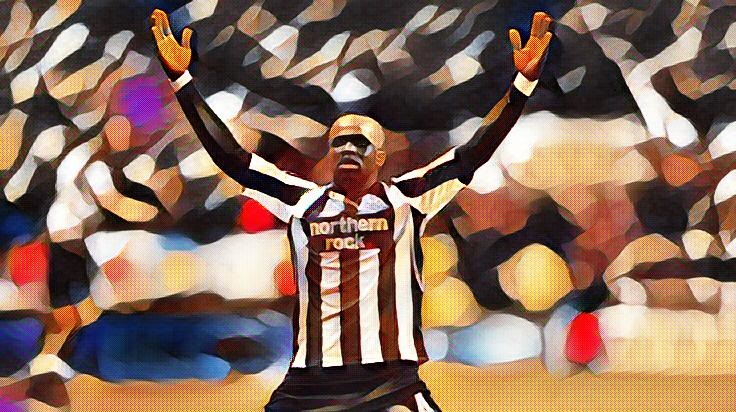 With the clock showing 90 minutes the game was already in injury time. It had already been a great fight back from Newcastle United having been 4-0 down to a rampant Arsenal in the first half. However, they came out fighting in the second. Somehow they had managed to pull three goals back but now with only seconds remaining time was running out. For Newcastle they had one more throw of the dice. A free kick deep in Arsenal’s half was delivered into the box by Joey Barton. An Arsenal head cleared the ball to what looked like relative safety, however as the ball began dropping from the sky, Cheick Tiote stood underneath, and from 30 yards unleashed a powerful left footed drive that flew into the goal and remarkably drew Newcastle United level to 4-4.

The Toon faithful couldn’t believe their eyes as Tiote turned and ran with the biggest smile on his face before being mobbed by his ecstatic teammates. Tiote may not have scored any more Premier League goals but that strike is one that everyone remembers, but Tiote should be remembered for so much more.

The midfielder began his career in Belgium playing for Anderlecht but struggled to make the breakthrough. He was loaned out to Dutch side Roda and played the whole season scoring two goals while fast becoming a fans favourite. But rather than return to Anderlecht, the Ivorian joined FC Twente for £750,000.

He soon became another fans favourite at his new club. At Twente he was determined and resilient in midfielder but was excellent with his distribution. Despite a few red cards, Tiote helped the club win their first ever league title and the fans loved him for it. Tiote played in the League 58 times, scoring once and assisting in 14 goals in his time with Twente.

With his performances being monitored around Europe it was Newcastle United who signed the talented midfielder in 2010 for £3.5m. He debut for the Toon was excellent as he tore around the pitch making two interceptions, completed all of his 64 passes, completed all five of his tackles and even had a shot on target. Like his previous clubs, the fans loved Tiote and his no nonsense approach. His robust tackling at times got him in trouble and the Ivorian would find himself suspended from time to time, but he was loving life, loving the club and loving the fans and they loved him. In his first season he made 28 appearances and scored one goal, and yes it was that goal.

His second season at Newcastle was more frustrating as injury and the African Nations reduced his playing to 24 appearances. What was not in doubt was his no nonsense tackling as Tiote had picked up 25 yellow cards in just 50 league games but playing the way Tiote did it was not a surprise that he would pick up a booking or two
.
The 2012/13 season saw the midfielder make 31 appearances which again where reduced due to international commitments and injury. Tiote captained the club the following season in the absence of Fabricio Coloccini who had been injured at different stages during the season. Tiote made 36 appearances for the club although his form had suffered after the transfer of Yohan Cabaye. The loss of Cabaye affected Tiote, after the pair had forged such a great midfield partnership in the centre of the pitch.

In the 2014/15 season the big clubs where beginning to take an interest in the tough tackling midfielder with Arsenal very keen. However a knee injury and resulting surgery forced Tiote to miss majority of the season. It was a bitter blow for the talented player who was ready to move on from Newcastle to begin his next adventure.

The 2015/16 season was a major disappointment for the player as Newcastle were relegated from the Premier League and Tiote struggled for playing time.

In 2017 the Ivorian joined Chinese side Beijing Enterprises for an undisclosed fee, appearing in every match until third of June until his fateful collapse and death at the age of 30.

Tiote was a great player, he was such a strong player and had great ability in the centre of midfield. He would constantly hurry the opposition, putting them under pressure and either forcing them into a mistake or winning the ball back with a well timed tackle, and Tiote could tackle and tackle very hard. It was no surprise that at his very best for Newcastle, other top clubs were interested in signing the Ivorian. Had he not damaged his knee at the time you wonder what might have been for Tiote.

His death was a shock to everyone connected with football, he was fierce and tough on the pitch, who off the pitch was soft spoken with an infectious smile that would light up a room.

And so back to that game and that goal. What a a time to score, what a time to equalise after fighting back from 4-0 down, and what a strike it was from 30 yards, left foot into the back of the net. “Tiote, great strike, it’s an absolutely fantastic goal, by Cheick Tiote, its 4 all”

Cheick Tiote you will be greatly missed by all.