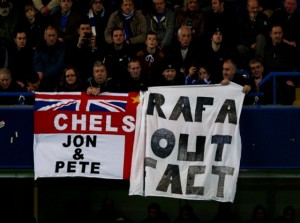 Think of Chelsea Football Club, and what appears in your mind? The royal blue shirts of the West London club? A world-beating team that have won twelve trophies in just eight seasons? A Portuguese maverick at the helm of one of the great dynasties of English football? Or a Russian oligarch that has pumped billions of oil-rich pounds into the club? I’d stick a fiver on that latter point.

The truth is that the words ‘Chelsea’ and ‘money’ now come hand-in-hand, all due to Roman Abramovich’s footballing hobby. The Russian’s £8.4bn fortune allows him to wheel and deal with the great and good of the world, and when he wanted to buy Chelsea, he was going to get his deal. Since his takeover in 2003, Abramovich has spent over £1bn on transfers, let alone the £140m it cost to buy the club, a brand-new training centre and mass improvements behind the scenes. But this week, his money has reared its ugly head, and the Chelsea fans aren’t exactly happy about it.

After losing 3-0 to Juventus midweek, Roman had had enough. Two points from four games in the Premier League left them four points adrift from the top of the league, whilst the loss in Turin leaves the European Champions at the brink of elimination from the group stages of the Champions League. Abramovich wanted a head, and it was Roberto Di Matteo that took his brown box and cleared his desk.

Sacking a Chelsea legend – someone that had won the much-coveted Champions League trophy for the club last season – wasn’t ever going to be particularly popular with the fans, but the bizarre decision to bring Rafael Benitez, former Liverpool manager, in as interim head coach baffled the world. As the rumours spread across the internet like wildfire, Chelsea fans were livid, and the boos that greeted him at Sunday’s game against Manchester City proved their point. The fans don’t want him, and are already laying in to him.

But should the fans’ axe already hovering precariously above Rafa be wielded, or should they be shouting down Abramovich? As vast as his fortune, you can’t buy club pride, as he is learning quickly.

The protests at Stamford Bridge on Sunday were all aimed at Rafa – ‘RAFA OUT’, ‘RAFA – WE DON’T FORGET’, ‘ONLY ONE DI MATTEO’, to name but a few. The boos that continually rang around the ground will have unnerved him and the senior management, no matter what Benitez said in his post-match interview. The mass applause and cheering at the 16th minute of the game – a tribute to Di Matteo – prove how unpopular a decision this has been. But no fan doubts Abramovich – not a single one.

Unfortunately, money talks. The Chelsea fans won’t ever campaign against Abramovich, because of what he has given the club. If they alienate their owner, he will walk away, and if he walks away… There are problems. Major problems.

‘In Roman We Trust’, said one solitary banner at the game on Sunday. Just one person who believes it may have been the right move. Whether he believes that deep down, I don’t know, yet his choice of statement speaks volumes. The fans know that they need Abramovich to stay at the top of the game, and Roman knows that the fans need him, too. All the power lies in the Russian’s hands, so he’ll do whatever he wants.

Nine managers have taken the reigns at Chelsea in as many years, with only two lasting more than a year in the role. The club have spent £86m on sacking managers since 2004 – an astonishing sum, seeing as that’s just contractual pay-offs. Roman craves success, and the minute he doesn’t like what he sees, he smells blood. Repercussions don’t cross his mind – he rules the roost, and he’ll do what he wants. Decisions may not be popular with the fans – the sacking of Di Matteo and the £50m purchase of Fernando Torres spring to mind – yet the fans won’t complain. Abramovich saved the club and brought some of the best in the world in; if the fans have to suffer silently to keep him around, they’ll do exactly that.

The decision to axe Di Matteo is highly unpopular throughout the game, and may come back to bite Abramovich hard come the end of the season. The fans aren’t happy, Rafa doesn’t have the backing of the fans and the club looks in a turbulent position, with experienced players, like Ashley Cole and Frank Lampard likely to leave the club at the end of their contracts. Rumours over the weekend surfaced that Pep Guardiola, Roman’s choice to replace Rafa at the end of the season, doesn’t want to take the West London role, as the Russian is ‘too trigger-happy’. When a manager’s replacement is already being discussed just two days after his appointment, you know you’re in for a rough ride.

The Roman Revolution came, saw, and conquered. The glory day in Munich in May was the culmination of eight years’ investment and hard work. As all major revolutions have found – America, Germany, Russia, China, the Arab Spring – having your day basking in the sun is the beginning, not the end. It’s uphill from that point, and it most certainly will be for Abramovich’s Chelsea.

Friend Reveals Italian Will Take Over Chelsea: “The Deal Abramovich Offered is Fantastic, He Will Do Very Well”