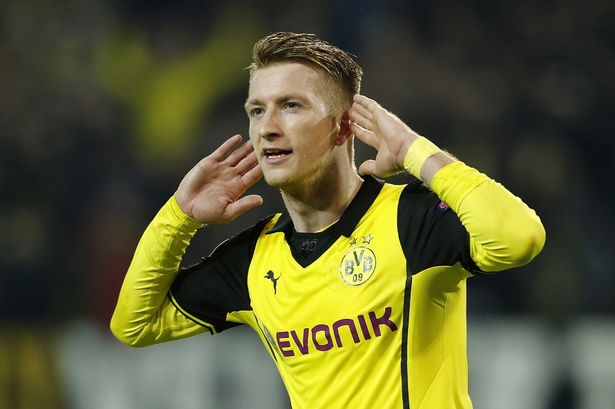 Premier League defending Champions are reported to be plotting a shock move for German attacker Marco Reus in January. The Blues have been linked with a number of attacking players ahead of the winter transfer window in a bid to bolster their attacking options. Having signed Spanish winger Pedro Rodriguez , Brazilian Kenedy and Colmbian Radamel Falcao, it is believed that Chelsea manager Jose Mourinho is still very much keen on making one or two additions to his attack.

The Stamford Bridge outfit have already been linked with Atletico’s Antoinne Griezmann  and Dortmund’s Marco Reus has emerged as a shock target for the Blues. It remains a mystery how the 26 year old German has remained at Dortmund despite being highly-sought after by a lot of major clubs in Europe but that could change in January.

The German International who was said to have signed a principle agreement with Real Madrid is also heavily touted by other Premier League clubs like Manchester United and Manchester City. In particularly Manchester United, the Red Devils were reportedly close to signing the German but were put off by Dortmund’s asking price of 50 million pounds.

Another club that was also close to signing Marco Reus was Real Madrid, it was reported that the 26 year old had agreed a five year deal with Madrid worth 103,000 per week but it all turned out to be nothing more than rumour. Nevertheless, Chelsea will be looking to make sure their attempts to sign Marco Reus doesn’t fall through for whatever reason.