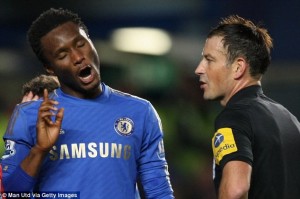 The FA have today confirmed that they will not be taking any action against Mark Clattenburg after Chelsea FC made allegations about inappropriate language they claimed he used.

Initially, two complaints were put in, with it being reported that one of the players had heard Clattenburg call Juan Mata a “Spanish tw*t”, whilst Ramires claimed that the referee said “shut up you monkey” to John Obi Mikel

Mikel was much closer to the referee than Ramires was at the time of the interaction and heard nothing. The other match officials, who could hear everything through their communication equipment, were adamant the alleged words were not uttered, and there was nothing in the video footage to support the allegation either.

As there was no evidence to support Ramires claim, and evidence to contradict it, the FA believe that Clattenburg doesn’t have a case to answer. However, more importantly for Chelsea fans, they will be relieved to hear that the FA don’t plan to take any action against Ramires either, believing he made the accusation in “good faith”.

However, reports in the press the next day claimed that things became very heated in the referee’s room after the game. Mikel confronted Clattenburg and the officials with Roberto Di Matteo, then assistant manager Eddie Newton and chief executive Ron Gourlay. “I’m going to f**king break your legs!” was heard directed at Clattenburg before security had to intervene like “bouncers at a pub brawl”. Mikel has been charged by the FA for this incident.

“To know you were innocent of something but that there was the opportunity for it to wreck your career was truly frightening,” Clattenburg said. He has been unable to officiate any game since the allegation was made and will presumably be looking forward to getting back to work. However, it’s likely that he will be given a hard time by the fans now. You can only imagine the chants that some fans will sing every time he books a black player. Clattenburg is innocent but football fans don’t half enjoy a wind up, however inappropriate it may be.