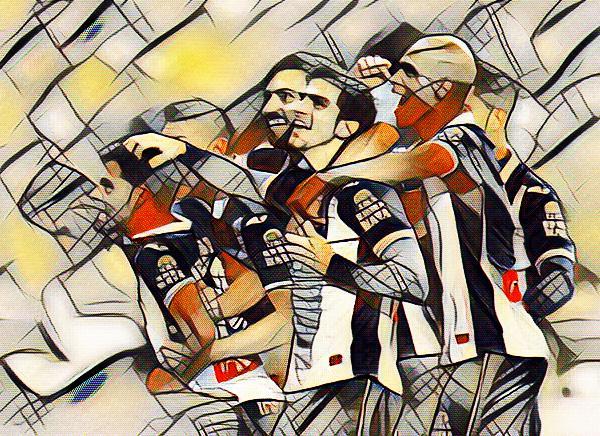 RCDE, Barcelona – ‘Thank You Valverde’ was written large on the stadium scoreboard before the match and by the end, the sentiment towards their former manager had been enhanced. Not only had Espanyol managed to beat Barcelona but they brought an end to their Catalan rival’s 29 match unbeaten run stretching back to the Super Cup defeat to Real Madrid in August. “This win is important for the history of the club and it knocks down all those walls,” Espanyol manager Quique Sanchez Flores said after the match. “Now we don’t have to count how long it has been since we beat Barcelona because it’s back at zero and the joy is immense.”

Espanyol’s game plan was not to press high up but rather wait for la Blaugrana to enter their half and flood the centre of the pitch with midfielders. Messi, consequently, linked up little and Barcelona were unable to spread the ball out wide. Javi Fuego, Victor Sanchez, and David Lopez all impressed in the Espanyol midfield – frustrating Barcelona and limiting them space to operate. Denis Suarez had the first-half’s best chance – receiving a pass from Alena, the Spaniard shot wide of the post.

The second-half continued in much the same vein. Though in the 62nd minute Barcelona got their break. Esteban Granero brought down Sergi Roberto in the penalty area, referee Senor Bengoetxea pointed to the spot. Up stepped Messi to take the penalty but former Real Madrid goalkeeper Diego Lopez guessed correctly and saved the spot kick.

The match opened up in the final 20 minutes, with the hosts urged on by the roaring crowd. The clock read 88 minutes when Navarro picked out Oscar Melendo – who had just come off the bench – unmarked in the area and the substitute stroked in a left-footed shot past Jasper Cillessen to hand Barcelona their first defeat since August and Espanyol a historic victory. “That a boy that has been here since the youth teams like Melendo scored the winner is great,” said Flores. “I love it, we will remember Aaron and Melendo, they are the future of Espanyol.”

Metropolitano, Madrid – Vincenzo Montella could breathe a sigh of relief. After a tough opening couple of weeks at the helm in Sevilla, his side travelled to the capital and managed a hard-fought victory against inform Atletico Madrid. “It gives us a lot of confidence and conviction but I repeat that is only the start,” the Italian told reporters post-match. “We knew it would be difficult in a tough stadium and today we risked a little more, which is what I wanted to see.”

After that infamously crazy derby against Real Betis and the defeat against Espanyol last weekend, Sevilla would have no doubt been delighted with a draw at the Metropolitano but to score a late winner certainly was a pleasant surprise. Leading through Diego Costa’s powerful left-footed finish, Atleti were heading towards a crucial advantage in the quarter-final encounter before a remarkable comeback –largely down to defensive errors – occurred.

First Jesus Navas saw his cross deflect over a hapless Miguel Angel Moya to level the match in the 79th minute, and then it was Joaquin Correa who burst forward on the counter-attack, holding his nerve to give Sevilla the lead. The last few minutes were nervy for the visitors but they were able to ensure that come next Tuesday they will have a lead to defend.

Butarque, Madrid – The crowd had waited all match for a goal – the first attempt on target hadn’t come until well after the hour mark. Leganes defended deep but created chances on the counter-attack; they’d hit the bar and Claudio Beauvue had forced Kiko Casilla to make a reflex save at his near post but still it was goalless. Real Madrid – with only Dani Carvajal and Raphael Varane remaining from the side defeated by Villarreal on Saturday – just never started playing. Luka Modric and Isco were both brought on midway through the second-half in an attempt to add life to a dormant Madrid performance.

After a few goalscoring chances had gone astray, the hosts had begun to settle for a useful draw that crucially didn’t include an away goal. But with 88 minutes played Isco played the ball out wide to Theo Hernandez. The left-back ran into the space created by Marco Asensio’s clever movement, before delivering a pinpoint cross into the Leganes area where Asensio finished from a tight angle. The slither of white shirts in the corner jumped and shouted. It was a goal that was welcomed. It was a goal that was needed. “We played worse than the other day but we won,” Varane said. “We lost the last match when we played well – I prefer to play worse and win.”

Mestalla, Valencia – Alaves will wonder how they managed to come away from Valencia with a defeat on Wednesday evening – a game in which the visitors impressed for large parts somehow resulted in them throwing away a one-goal lead. Having the best of an entertaining first-half, Alaves opened the scoring with a terrific effort from Ruben Sobrino, who took aim from 25 yards out and drilled the ball into the top corner after 66 minutes.

However, los Che pounced back when their star player this season, Goncalo Guedes, hit his fifth goal of the season before Santi Mina teed up Rodrigo for a smart close-range finish in the 83rd minute. That left Alaves – who had Adrian Dieguez dismissed for a second booking – unable to find time for a late equaliser but their away goal leaves things nicely poised ahead of the return leg next week.