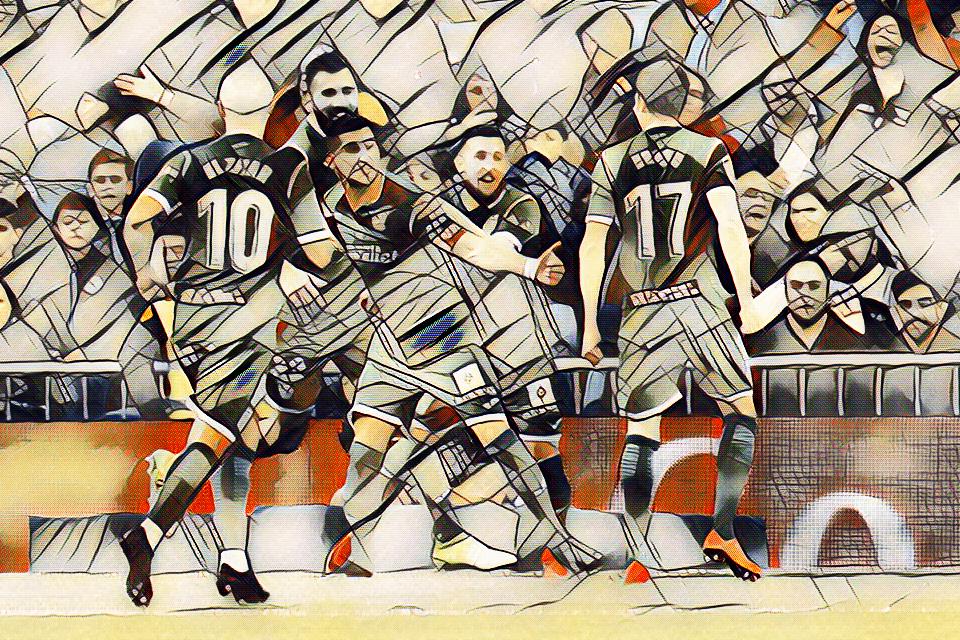 Ramon Sanchez Pizjuan, Sevilla – “Without fear, with courage,” was Vincenzo Montella’s response as to how his Sevilla side were going to address this second-leg tie against Leganes. Having scored an away goal last week, Sevilla were the favourites but then Leganes have long defied expectations; rising from Segunda B to la Primera in a matter of years to now being one match – one victory – away from a Copa del Rey final place.

As the Sevilla players walked out onto the pitch – alongside their Leganes counterparts – the lights dimmed and the anthem was sung. Ahead of them a banner was unfurled ‘Llevame a otra final’ it read …‘take me to another final’. And it was Sevilla who took an early advantage. Luis Muriel had been the goalscorer for Sevilla in the first-leg but this time the Colombian was the playmaker – beating two Leganes defenders before cutting the ball back for Joaquin Correa, who slotted the ball into the net from just a few yards out. The chance of reaching a second Copa final in three seasons started to look that bit more likely.

Leganes kept their heads and did not panic. A few long-range efforts were aimed at Sergio Rico in the Sevilla net, he didn’t exude confidence when dealing with them but he dealt with them nevertheless. The direct approach from both sides continued but Muriel was the player dictating the play. He crafted another chance shortly before the break when he manoeuvred past four defenders before crossing for Ever Banega, but the Argentine’s shot was cleared in front of goal by Tito.

The second-half began with an underwhelming start – neither side were truly going for it as both were cautious of conceding. Ruben Perez tried his luck from distance in hope of evening the tie but his shot went the wrong side of the goalpost. With every minute came a slightly higher Leganes press but that just opened up more space for the Sevilla attack. Pablo Sarabia shot at goal but was denied by Champagne – Leganes were still in it but not for much longer.

With a matter of minutes left to play Gabriel Mercado hoofed a long ball upfield for Sandro Ramirez, who played in Franco Vazquez. The Italian muscled off a couple of defenders before putting the ball past Champagne and into the net. Leganes were out – far later than anyone had predicted – but there was little room for sentiment; the better team over the two legs had progressed. Amidst the celebrations in the stands, part of the banner in the tribuna fondo fell away – ‘a otra final’ was all that was left. To another final. Sevilla 2–0 Leganes (2–1 agg)

Mestalla, Valencia – It was not easy, it was never going to be easy. Although Barcelona were in control of this tie they were up against a motivated team with a city behind them. The Valencia team bus was welcomed with the usual fanfare that graces a Copa semi-final and in the stadium the fans never relented with their singing and enthusiasm. The opening was cagey but Barcelona had the better of the early chances – Leo Messi curled a free kick towards the top corner but Jaume Domenech flew to his left to make the save.

Valencia soon came into the match and started to create chances of their own. Rodrigo had a header come back of the crossbar and another long-range effort was stopped Jasper Cillessen. Defensively, los Che were limiting Barcelona’s attacks down the left – denying the axis of Andres Iniesta, Jordi Alba, and Messi from developing – forcing la Blaugrana to create elsewhere. There was certainly an aspect of physicality to the match – Domenech was involved in a rough collision whilst on numerous occasions Messi found a Valencia player hanging on to the back of his shirt.

There were no goals at half-time but there was a substitution; Ernesto Valverde said he saw the change clearly and brought on Philippe Coutinho for Andres Gomes in an attempt to move Barcelona forward. The Brazilian provided the offensive punch that Valverde had hoped. Luis Suarez received the ball on the left, faked a cut inside before moving outside and curling a cross for Coutinho to latch onto at the far post. 1-0 and an inspired substitution. Valverde has been credited this season for making crucial changes during matches and this was no different.

Valencia now needed three goals in the last 40 minutes. A task that looked virtually impossible. Barcelona became much more relaxed – their play became patient – and they controlled the match. Valencia kept plugging away – Gaya was convinced that he had brought his side level in the match when he looked to tap in a cross from just a few yards out, but Cillessen made a splendid reaction save to deny him. The final blow for los Che came in the 82nd minute when Suarez, again, set up Ivan Rakitic who fired the ball into the net and sent Barcelona to their fifth consecutive Copa del Rey final. Valencia 0–2 Barcelona (0-3 agg)