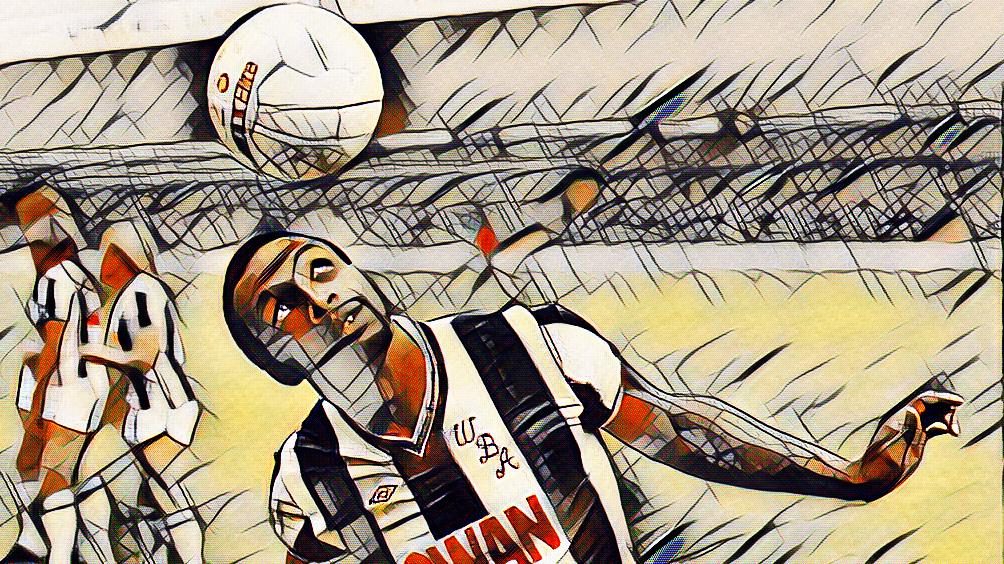 West Bromwich Albion are the biggest club. Sorry Baggies fans, but I’m sure you can admit that yourselves. Heroes of West Brom can probably be counted on one hand. I’m not talking about folk heroes who are revered by fans for being try-hards or doing something legendary. I’m not talking about the Chris Brunts and Keiran Richardsons of the world. I mean proper heroes. I mean the type you wanted to grow up to be like when you were a kid. I mean that type that had a lasting effect on you. I mean they guys who you would literally melt in front of if you ever met them. For West Brom fans of a certain vintage, Cyrille Regis was certainly one of those guys.

Cyrille Regis was born in French Guiana on 9th February 1958. His mother was a seamstress and his father was labourer from nearby St. Lucia. Life was obviously hard for the Regis family in their homeland, as father Robert moved to England in 1962. A year later he was joined by his wife, Mathilde, and the rest of his family. Young Cyrille would grow up in Molesley, London, and left school in 1974. He gained a City & Guilds qualification and took up a career as an electrician. He continued his employment in his day job while he was playing semi-professionally for his local side, Molesley, in the Athenian League. He scored 24 goals in his maiden season for Molesley and was approached by Boreham Wood. He would turn them down though and ultimately joined Hayes, where would score 25 goals in another solitary season.

The big clubs started to notice this 19 year old centre forward who was scoring goals for fun and bullying defences in the lower leagues. He was clearly playing above the standard he was currently at. There was something there with Cyrille clearly – it just needed the right man to mould that ‘something’ into ‘something special’. Ronnie Allen, West Brom’s chief scout, recommended Cyrille to the board. At first they refused to pay the four figure fee for such a young player. After all, he was just potential at the minute and he was only playing semi-professionally – that was practically Sunday league in the 70’s. Allen told the board he would pay any up front fee out of his own pocket, so sure was he that Cyrille would make it at the top level. He completed his big move to The Hawthornes in May 1977 for £5000 up front, with another £5000 to be paid once he made 20 appearances.

Cyrille was an immediate hit for his new club. He scored two on his debut, a 4-0 win over Rotherham United in the League Cup. A week later he scored a remarkable solo effort on his league debut as the Baggies beat Middlesbrough 2-1. Ronnie Allen had taken over from Jonny Giles at the beginning of the season, so I suppose you could say he had the exact player he wanted and knew exactly how to play him. It was clear that Cyrille had adapted to life in the top flight with consumate ease and finished his first season in Division One with 10 goals from 34 appearances.

Cyrille would stay in the West Midlands for 7 years altogether. Eventually Ronnie Allen left to take over the Saudi Arabian national team and was succeeded by Ron Atkinson. Nothing changed on Cyrilles end though and he continued to score goals, his highest season tally for the club being 17 in 37 games during the 1981/82 season.

It wasn’t just his goals that Cyrille was revered for whilst at the club though. Along with Brendan Batson and Laurie Cunningham, Cyrille became part of what Ron Atkinson notoriously dubbed “The Three Degrees” in reference to the popular black soul music group around at the time. Indeed West Brom were the first club in England to regularly field three black players. But this wasn’t an exercise in diplomacy by the club or Big Ron. Laurie, Brendan and Cyrille deserved their places in the team. Batson would make 172 appearances for the club at right-back and Cyrille’s goal record spoke for itself, while Laurie Cunningham would go on to become the first British player to play for Real Madrid. The Three Degrees became pioneers of the game for young black people across the country. From nowhere, a game previously dominated by the white working classes now had black heroes.

They faced their fair share of abuse, of course they did, this was 1970’s and 80’s Britain after all. The miners strikes were about to cause unrest in mining towns, Thatcherite policies were on the verge of seeing unemployment figures at an all-time high, and inclusion and diversity was as widely accepted as it is today. The racist abuse from the stands and throwing of bananas onto the pitch was common place. But The Three Degrees were not deterred. In contrast, it spurred them to prove to the racists that they were where they deserved to be.

Like all good bands though, The Three Degrees would eventually break up. Brendan Batson was forced to retire in 1982 following a serious knee injury and Laurie Cunningham was off to the Bernabeu to make history on another plain. Cyrille too was about to move away from The Hawthornes. In 1984, he moved across the Midlands to Coventry City for £250,000.

He got off to a slow start at Highfield Road, only scoring a combined 10 goals in his first 2 seasons at Coventry. The highlight of his playing career was still yet to come though. In the 1986/87 season Coventry City, managed by John Sillett and George Curtis, and with another black icon of the day Dave Bennett in the side, made it to the F.A Cup final for the first time in their history. Nobody gave Coventry a chance against a classy Spurs side, containing the likes of Glenn Hoddle, Chris Waddle and Clive Allen, who had scored 48 goals on his own that season. Cyrille started the game but it was goals from Bennett, Keith Houchen and an own goal from Gary Mabbutt which sealed a 3-2 extra time from what is widely seen as one of the all-time great F.A Cup finals. It would be Cyrille’s only major honour in football.

Cyrille would leave Coventry at the beginning of the 1991/92 season to join Ron Atkinson at Aston Villa. He would stay there for one season and go on to play for Wolves, Wycombe Wanderers and Chester City, before eventually retiring in 1996 after 19 years in the game. Overall he made 614 professional appearances and scored 158 goals for 7 clubs. Upon entering retirement, Cyrille became a licensed sports agent and represented his nephew, Jason Roberts, throughout his career. He and his wife were advocates of WaterAid, a charity that aimed to provide clean water in Ethiopia, and regularly visited the country to see the good work carried out. Following the tragic death of Laurie Cunningham due to a car accident whilst on loan at Valladolid in 1989, Cyrille became an Evangelical Christian. He kept himself to himself largely and, on the morning of Sunday 14th January 2018, the world awoke to the news that Cyrille had passed away due to a heart attack. He was just 59 years old.

There is a lot that you can say about Cyrille Regis, the man and the footballer. The great thing about this is that nothing you can say about him is bad, and nobody ever has. As a footballer he was dominant forward. He was aggressive and used his strength against opposing defenders. He was tactically astute and always made the right run at the right time. In modern day terms, he knew how to lead a one man forward line. As a man he endured so much and did so with a smile on his face. The abuse that he, Brendan and Laurie faced was poisonous and vitriolic. Yet they all carried on with class and grace. They simply let their football do the talking. What they may not have realised by doing this was how much of an inspiration they had become to young black people across Thatcher’s Britain. They proved that they could win respect through talent and ability. The outpouring of emotion since Cyrille’s death has been touching to see. Still nobody has a cross word to say about him. When your time comes, I suppose that’s the biggest tribute that can be paid.