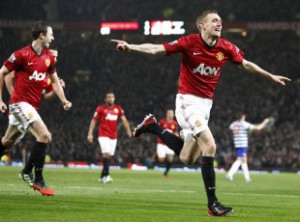 Football is seldom a place for sentiment. Passengers can’t be carried and testimonials exist as the right place to say goodbye to servants who’re no longer able to compete at the top level. Brutally, the head must rule the heart.

We’re just over three months into Darren Fletcher’s comeback. He has ulcerative colitis – a condition that’s only curable with an operation but is manageable as Steve Redgrave and Lewis Moody can testify. Having played over ten hours of football and just over 30% of all United’s minutes this season, Fletcher’s reintroduction has been understandably gradual but a tad uncomfortable too.

For numerous reasons, Darren’s a much-loved figure at the club. Having come through the academy and proved the early doubters wrong, he grew into a key figure in United’s midfield as an energetic genuine box-to-box midfielder. Maturity seemed to be something that came to him early – the right and appropriate cliché would be ‘model professional’, it’s hard to fault him.

Despite being born north of the border, he’s one of our own and someone fans may have been watching for more than 15 years. We therefore naturally afford him more leeway and more chances than others as we’ve come to know him over the years. We like Darren and when he scored against QPR it was one of those great moments that football can provide – both relief and pure elation. The hard thing though, is to assess everything other than the goal, this won’t be an easy to say…

Whilst pleased that Fletcher’s been able to return at all, at present he is not good enough to be playing for United. He might be the perfect professional and a shining example to young players; he might be fighting against an energy sapping illness; but United already have too many passengers. If he were a player at another club right now, United would not be interested in signing him. It therefore begs the question, how much more is there to come from him? Will he ever be able to be the box-to-box midfielder he once was?

Darren’s reintroduction into the side has been as a holding midfielder. He’s had little need to run too much because clearly he hasn’t the energy for that yet. With players around him doing his running, he’s simply been used as a link-man and someone to protect the back four. The reality though is that his performances have been underwhelming. Illness or not, if he’s selected to play he can only be judged by what he does on the pitch, the same as every other player.

As I said, the head must rule the heart. He’s been too slow and whilst he’s a good reader of the game he’s not like Carrick defensively – he’ll never be a regular interceptor of passes and doesn’t seem to be positionally perfect in that role. On the ball he’s been a tad sloppy too – fine when simply linking play but far from expansive and doesn’t quite have that killer pass in him that Carrick or Scholes have.

Of course, this reads horridly. No one likes being critical particularly when the subject is someone so likeable. The big question is whether there’s more to come. Having been eased back in, he’s now been used twice in a week suggesting that this is probably him back to his peak fitness level given his illness. In which case, is this Darren Fletcher really good enough?

My gut and an answer I fear, is probably not. Taking away the emotional attachment this is a player who’s been largely ineffective in the games he’s played. The praise he’s received has been mainly because of who he is rather than what he’s done.

So what does the future hold for Darren? It’s definitely too soon to write him off and being critical of him won’t sit comfortably with those who cannot separate the heart from the head but if he cannot get better than this then his place as a player at United will have to be seriously considered. One hopes that this debilitating and cruel illness will ease and allow Darren to become the box-to-box player than United so badly need but three months in things don’t look that positive. There’s no denying that he’s been awkward to watch and it’s horrible watching him play with such limitations.

How much longer a comeback or reintroduction can be dragged out is unknown and he’ll rightly be given as long as possible. Whether it’s as a player or not, Darren will forever have a place at United but there will come a time when emotion and sentiment has to be pushed to one side and the sake of the team put first.