Skip to content
Posted in Abroad By By Far The Greatest TeamPosted on November 5, 2012November 2, 2012Tagged Alessandro Del Piero 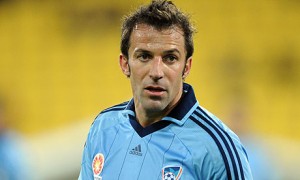 When Alessandro Del Piero stood in front of his Juventus fans and waived an emotional goodbye after 19 years at the Stadio delle Alpi, few in the news soccer thought we would ever see him grace the football field again.

A life of celebrity stardom and possible managerial successes lay ahead of him but, instead of succumbing to the attention that was bound for him after professional retirement, Del Piero set off on an experiment to expand the sport across the world. And, it has certainly gone well so far.

The Italian joined Australian A-League side, Sydney FC, back in September, accompanying Emile Heskey and Shinji Ono as a trio of big-name stars determined to raise to awareness of football down under.

Del Piero has not only raised the profile of the A-League, but his notable performances could aid Sydney’s title challenge this season.

Just four games in, Del Piero has played every minute, scored three goals and looks to have settled down perfectly to his new surroundings. He made his 800th professional appearance last week against Perth, scoring in the process, and his home debut against Newcastle set an Australian TV record for a single match viewing figures: +164,000.

Although Del Piero is showing his age – the 37-year-old aggravated a hamstring problem during his milestone appearance – there is little doubt in the A League betting that his influence on the team and the league is already paying off.

The feisty Italian made winning trophies look like an art form for club and country and now he is doing the same for Sydney.

With a strong defence and competent midfield willing to feed their strike force of Del Piero, Mitchell Mallia, and Krunoslav Lovrek, the Sky Blues look like a championship team as the A-League heats up this summer.