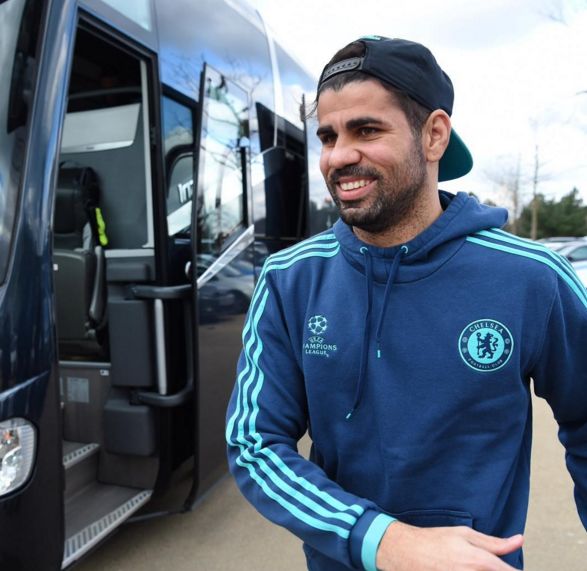 Chelsea forward Diego Costa could face a 3-match ban following his red card at Everton – Saturday’s FA Cup quarter-final defeat at Goodison Park. The Spain international has been charged with improper misconduct by the Football Association (FA) for his reaction toward the end of the game dismissal by referee Michael Oliver during the FA knockout on Saturday.

If Costa is found guilty, he could be suspended for an extra game over the one-game ban for the dismissal after two yellow cards. According to reports, the charge relates to his reaction to being shown his second yellow card by referee Michael Oliver. He has until Thursday at 6pm to respond to the charge and if found guilty could be given a one-match ban.

Initially it was understood that the 27-year-old had a clash with Everton midfielder Gareth Barry, but Barry has recently moved to admit that Costa had not bitten him after their altercation, during which Costa nuzzled his mouth into Barry’s neck.

Now the striker has no case to answer over speculation he bit Gareth Barry during Saturday’s FA Cup quarter-final defeat at Goodison Park. Costa is already suspended automatically for his first red card as a Chelsea player and will miss Saturday’s Premier League clash with West Ham. Two additional and separate one-match bans could follow.

The FA communicated with Everton after Saturday’s game for their observations over the incident. Everton reported that Barry said he had not been bitten and, with that being the case, the FA will take no further action.

Although the Brazil –born international forward has escaped punishment after his clash with Barry, the FA are still investigating the allegations that he made an inappropriate gesture to Everton fans at half-time in the match. As a result, the forward has been given until 6pm on Thursday to explain the alleged gesture toward Everton fans.

A statement from the FA read: “Diego Costa has been charged in relation to Chelsea’s FA Cup sixth round fixture against Everton on Saturday, March 12, 2016. It is alleged his behavior, after being shown a second yellow card in the game, amounted to improper conduct.

“He has until 6pm on March 17, 2016 to respond to the charge. Meanwhile, the Chelsea striker has until Wednesday (March 16, 2016) to provide his observations to The FA in relation to an alleged gesture he made towards Everton supporters while leaving the pitch at half-time.”
Costa is no stranger to controversy and has a reputation for antagonizing opponents. He collected his 10th Chelsea yellow card of the season before seeing red.

Chelsea and Man Utd in Competition Over ‘Next Gianluigi Buffon’