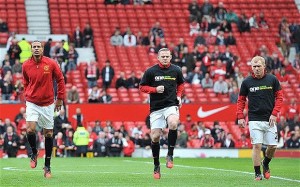 Rio Ferdinand had a pretty bad year both on and off the pitch, and he hasn’t held back in letting his feelings known. So it doesn’t come as much of a surprise that Rio got himself involved in ‘tshirtgate’. However, what did surprise a lot of people is that he defied Sir Alex in public and as a result, will definitely feel the wrath of the gaffer.

Ferdinand has always been seen as a passionate and reliable member of Manchester United’s footballing fraternity. He loves playing for both club and country, goes absolutely mental whilst celebrating key goals, and his support is there for everyone to read on Twitter, whether it be cheering on the team whilst he is not playing, or for expressing satisfaction / despair post games that he’s been involved with. Though slightly veiled, he did make his thoughts public of the racism affair involving John Terry and Anton Ferdinand. So when Sir Alex criticised Jason Roberts’ stance regarding wearing the ‘kick it out’ tee shirts and stated that Rio would be wearing, one not many would have thought otherwise. Oh well…

It’s easy to take sides in this matter. On the one hand, given that his brother was a victim of racist abuse, you’d expect Rio to wear the tee shirt and support the cause of the campaign thereby doing his bit to spread awareness. However, the other school of thought (which he probably is a part of) is to express disappointment in the lack of influence and authority exerted by the campaign which resulted in the abuse of his brother and the subsequent ‘lenient’ punishment handed out to the offender. But Sir Alex prides in having a collective spirit and a unified team. Hence, for one of the senior players to step out of line and go against voiced statements was probably professional suicide.

Fans of the club are already asking for Rio to be flogged off in January. His contract expires at the end of the season and Ferguson could be driven to sell him for a price especially if the relationship cannot be mended going forward. However, for the fans to use this opportunity to deride Rio’s form and term him as a spent force is both irrational and immature. True, he isn’t flawless anymore but is still our first choice centre back and a great leader for the rest of the team. His adept positioning makes up for lack of pace. To be slated for not being able to keep up with Gareth Bale is implausible. Evra and Rafael were equally at fault for Bale’s goal against United as they didn’t stay narrow and offer more protection against the direct running employed by the Spurs midfielders. I always believed that the reason we didn’t often see Rio throw his body around like ‘brave Terry’ was because he had his positioning right (just like how one wouldn’t see Nesta or Stam throw themselves around the penalty box).

With the current injuries in the team, it is imperative that United hold on to Ferdinand. No one still knows what Phil Jones’s best position is whilst Evans can offer the occasional horror show amidst a run of good performances. Smalling is yet to return from a broken metatarsal and Vidic, who didn’t recreate his earlier form after returning at the start of the season, has had another injury setback, Rio has managed to turn a corner regarding injuries and has been turning up fairly consistently since January. With no more England caps in the beckoning, the gaffer should let go of personal ego this time, and continue to show his faith in the defender; maybe also offer a contract renewal. However, if the hair dryer’s already been employed and boots have flown past, it would be a shame to lose such an outstanding United player of the past decade under these circumstances.