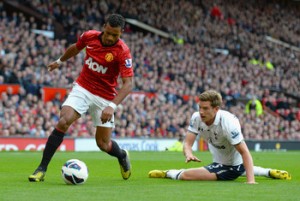 With the recent purchase of Crystal Palace winger, Wilfried Zaha, many are considering that is a signal for the end of Nani’s run with United. His form has been erratic, his play inconsistent and with the rumors spreading that he’s been unwilling to sign a new contract in the past year, all signs point to his untimely exit with the probable branding of “a player with much potential but failed to live up to it”. But despite all that, Nani still has a place at United and selling him would be a mistake.

Nani’s most recent appearance against a lethargic Fulham in the FA Cup show cased the many frustrations with Nani but, more positively, his talents too. He attacked with drive and purpose at every chance he got. He showed he was a player not lacking in confidence and was willing to take defenders on. I cannot say I’ve seen that same kind of confidence from Ashley Young and Antonio Valencia this season. In fact, Valencia’s atrocious form and inability to use his left foot makes him more of a liability than an asset at this point. Where Valencia’s predictable, (he’s going right no matter what “feints” he uses and then hitting a cross) , Nani’s unpredictable in a good way. (Is he going left or right? Is he crossing or shooting… or is he going to keep dribbling?)While Nani’s final ball and decision making can be found wanting at times, his ability to at least keep opponents guessing and off balanced brings the kind of drive and confidence that United has desperately lacked in the wings this season.

Nani is also more versatile at the moment than any of his competitors. He can play both sides of the pitch with ease. While Young and Zaha can do both, neither of them can whip in crosses with their left foot like Nani can. When your sole purpose is to unbalance opposing defenders and test their skills by whip point in difficult crosses, Nani’s ambidexterity is an asset that cannot be taken lightly. This is even more highlighted when the other winger literally cannot even take a touch with his left foot in any situation.

Let’s not forget that the Portuguese international is battle tested at the highest level and has more trophies to his name than the others combined. This type of experience (3 Champions League finals, 3 Premier League titles, 62 international appearances, 1 Champions League trophy, 1 League Cup and 1 Club World Cup) simply cannot be so easily replaced by an untested Championship winger who is just breaking out the international level. At least not yet.

Wilfried Zaha may be the next great winger to don the red of Manchester, but he is largely untested at this level of competition. To move Zaha ahead of Nani at this point would be premature. Nani was strong in his first season at United in 2007-2008, and was simply magnificent in 2010-2011. He still has the talent and capability of changing a game with the strike of his foot. Until Young, Valencia and Zaha show that they are capable of delivering the goods, selling Nani would be a great mistake.

Ronaldo back to Manchester United? No ta!