Skip to content
2 Comments on Done Deal, Chelsea Agree $16m New Signing, How Chelsea Will Line Up Next SeasonPosted in Chelsea By By Far The Greatest TeamPosted on July 24, 2015

Although the Blues already has brilliant play makers in the team, but boss Jose Mourinho still wants to augment his options in the attacking midfield department.

Chelsea are closing in on the signing of Spanish international and Napoli forward, Jose Callejon, as per reports. The Blues are in negotiations with the Serie A club to secure his services.

However, Callejon will reportedly cost the Blues a fee of around $16 million. The Spanish attacker will have the chance of featuring under his former boss, whom he said called him when he earned his first Spain call-up.

Callejon featured in 59 games for Napoli last season, scoring 12 goals and racking up 7 assists as well. The ex-Real Madrid attacker plays primarily as a right winger and should be utilised in his preferred position should he sign for the Stamford Bridge club.

Meanwhile, at Chelsea, Willian is deployed in the right hand side of the attack and Mourinho also signed Juan Cuadrado from Fiorentina in the same window to provide competition for the Brazilian in the same role.

The Blues need a goalscoring winger, with Willian only able to muster four goals since joining Chelsea. The 28-year old Callejon will definitely fit the bill and will solve the team’s goalscoring problems on the right wing.

Arjen Robben, Salomon Kalou and Florent Malouda are past Chelsea wingers who always come up with goals. Although, scoring goals is the main job of a striker, the other forwards which include the right and left wide men should also contribute their own quotas in case the striker is not having a good day.

For now, we are of the assumption that Callejon will be a starter in the team. The belief is that Chelsea will line up in the following way: 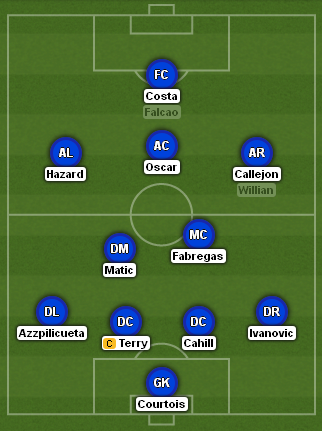