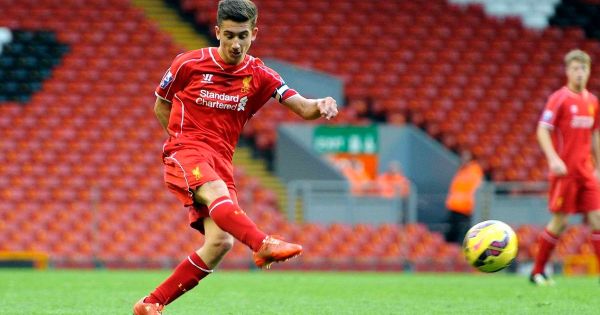 Posted in Liverpool, Newsnow Feed By By Far The Greatest TeamPosted on October 29, 2015February 2, 2017

Liverpool have once again shown faith in their youngsters as they have extended the deal of youth captain, Cameron Brannagan. The Liverpool under-21 captain has put pen to paper for a new contract that keeps him at Anfield in the next 3 years. Having shown growth and development through the years, the England U20 international earned his senior team debut in the Europa League match against Bordeaux earlier in the season. His promotion came under Brendan Rodgers, and with Klopp’s arrival, it is expected that he will be turned into a fine player under the tutelage of the German.

The teenager who has been with Liverpool since he was 5 years old has featured on the bench since the beginning of last season 7 times already, and with the new contract, it is expected he features more and has his chances for first team play increase. He has also been a part of the first team training at Melwood since Klopp’s emergence as coach, and with the coach’s assurance of handling youth team players playing roles if they show they deserve it, Cameron’s integration with the first team is at hand.

The club is known to field their young players in the Capital One Cup and Europa League fixtures, and with the games close by at the moment, much could be seen of the English teenager. Liverpool face Bournemouth at home on Wednesday night in the League Cup, and also have 3 more Europa League group games to play, giving speculations that more of a relatively young side that will feature Brannagan could still be seen with the number of opportunities that will be afforded them. However, with Klopp still in search of his first win as coach of Liverpool, there could be an exception to the starting lineup against Bournemouth as a strong team could get named.