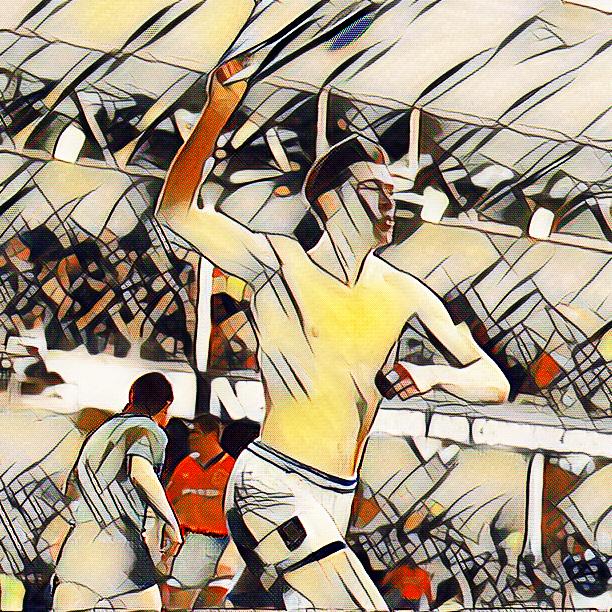 What does ‘legend’ even mean anyway? When I was a lad, Ok, a few years ago now, the word legend wasn’t used an awful lot. To me it was some sort of mythical creature whose feats were verging on the unbelievable, whether they were true or not. These days, if you walk into the pub on a Friday night for a few pints with your mates and duly announce “I’ve just been paid my bonus, the drinks are on me” you can be afforded ‘legend’ status by pretty much everybody who would benefit from the promised drink. Given Everton had the original no.9 in Dixie Dean who was both famous and a legend in the old sense, I thought I’d take a look at Duncan Ferguson.

There has been a distinct lack of legends on the blue half of Merseyside since football was invented in 1992 (up until then was just the longest preseason in the history of the universe). Recent examples of footballers being afforded legend status include Steven Naismith for buying tickets for the unemployed, Legend!; Tim Cahill performing at international level in his late 30’s, Legend! and most recently, Seamus Coleman running the full length of the pitch in injury time against Leicester City on his return from a double broken leg, Legend!

The old-fashioned version of legend includes the words, famous and notorious. He’s certainly famous amongst football fans. His notoriety is such that almost ten years after his retirement, the Daily Mirror amongst others putting him at the top of their list of Premier League hard men. He regularly tops similar polls. Respect!

Since ‘Big Dunc’, also known affectionately by the media as ‘Duncan Disorderly’, arrived on Merseyside in the mid-1990’s fans of Everton have been split on where his position rightly lies in the colourful past of the club. He’s certainly not up here with the original No.9 Dixie Dean, but then few are.

The stories started straight away. Joe Royle famously described him as a legend before he was a player after a weekend prior to his first Merseyside Derby. Duncan had gone out on the ‘lash’ the Saturday night before the Monday night game. He was on his way back to the Moat House hotel, where he was staying, with a female riding shotgun. After ignoring the no entry sign at the bus station next door, he drove and took a shortcut to the hotel where the police were waiting to breathalyse and arrest him. Given he was already awaiting a court appearance for assault, it wasn’t the best decision he had ever made. The woman? She was handed Duncan’s room key and was still waiting when he arrived back the next day. The subsequent opening goal in your first derby when your team is bottom of the league buys you some time it seems.

The disparency between his on-field aggression and off-field persona couldn’t have been more stark. Eight red cards on the football field contrasted with respected pigeon fancier in his home life. His conviction for assault and subsequent three-month prison sentence in 1995 may have seen off many players. Big Dunc was different of course and in the hastily rescheduled reserve game before his first-team return is believed to have attracted 20,000 fans. A heroes welcome was therefore guaranteed on Monday 11th December 1995 in a televised match against West Ham when he returned.

Whether Scotland lost out on glory due to Duncan’s self-imposed ban from international football is up for debate, although probably not. Whether he would have lasted as long had he not chosen to score his first goal in a Merseyside derby, probably not.

He tended to ‘turn up’ for big games with goals against Manchester United and Liverpool and almost single-handedly beat a strong Newcastle team in the quarter-final of the FA Cup later that season. Given the captaincy against Bolton Wanderers in 1997 when the blues were struggling he duly scored a hat-trick of headers. The first time it had been done in the Premier League at the time. He was just as likely to go missing, not just through injury or a pub crawl. Often it took someone to kick him before the beast inside was unleashed and he became unplayable.

He couldn’t even leave the club in a conventional way. In November 1998 he was sold from under the manager, Walter Smiths back by owner Peter Johnson leaving many fans distraught. It seemed to be the end as Duncan wrote an emotional goodbye letter to the fans in the club magazine. His poor injury record, however, ultimately led him back to Everton two years later.

He frustrated fans with his disciplinary record and didn’t just get sent off, he did it in style. His eighth red card was at Wigan when, just seven minutes after appearing as a substitute, a punch to the solar plexus of Paul Scharner saw him off. His fracas with Pascal Chimbonda ensured Ferguson received a seven-match ban in total. Almost as if to add the ‘legend’ status, Scharner later described the punch as “a nice punch”.

His quiet man off-field persona continued. The story goes that when Duncan transferred to Newcastle United he took his pigeons with him. Safely house in their new aviary, Duncan let them out and they promptly flew back to Everton. A case of once a bluebird, always a bluebird it seems. The quiet man persona didn’t apply to burglars, however. He was burgled twice and on one occasion detaining the villain who subsequently spent three days in hospital.

Duncan did have one moment of final glory towards the end of the 2004/05 season. Everton closing in on a top 4 place, entertained Manchester United on a Tuesday night under the floodlights. Needing to win to keep off the challenge of both Liverpool and Bolton, big Dunc rolled back some of his 34 years to put in one of those ‘unplayable’ performances. Scoring the winner with a diving header in the 54th minute was enough for the points. The first time Everton had beaten their North West rivals for ten years, when the winner was scored by… big Dunc. Amusingly and due to the importance of the game, each ballboy suddenly had the urge to grab a bin bag and collect every match ball, except the one being used on the pitch. The multiball system was declared null and void.

Even his swan song was unconventional but at least it didn’t go all ‘Stuart Pearce’. Just over a year later in his final game before retirement, Everton were awarded a last minute penalty and the perfect opportunity to bow out in style. The captain for the day stepped up to take… and miss, but of course, big Dunc knocked in the rebound. Legend!

Big Dunc left the club but a few years later decided to take his coaching badges and ended up back in his spiritual home. His testimonial in 2015 saw Wayne Rooney return for a short cameo. If we are talking about legends, then Rooney decided to become a Man United legend rather than an Everton. Rooney felt the need to recognise his hero and made the unusual step to return to Goodison Park and pay respects in a blue shirt, to his own hero.

Is he a legend or a myth? It was a period in Everton’s history when they underperformed, even by Everton’s penchant for snatching despair from the jaws of victory. The product of his years at Everton may not stand up with the true greats such as Dixie Dean. Even Gary Lineker whose year spent at Goodison was prolific. There was always a feeling Lineker was never fully accepted as he took the place of the much loved Andy Gray, so it’s certainly not about performance. Duncan’s force of personality enigma and love of Everton shone through and that’s priceless. He never shied away from confrontation or a drink for that matter. When I qualify him as a legend, I prefer the Urban dictionary definition:

“Totally worth of respect, for any reason”

…and to me, that makes him a legend!