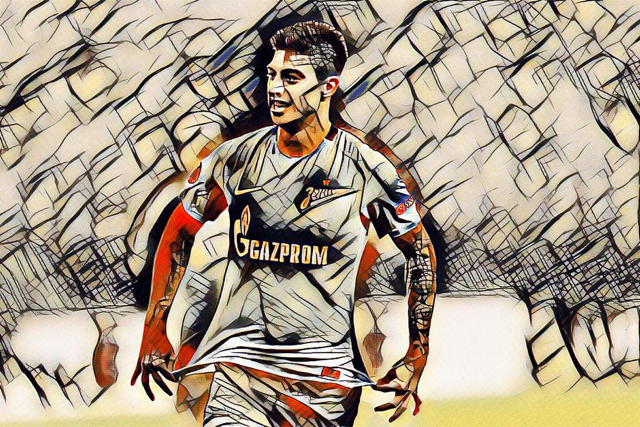 Zenit St Petersburg are beginning to get a large Argentinian contingent, with Leandro Paredes, Matias Kranevitter, Sebastian Driussi and Emanuel Mammana all representing the Russian club. However, it is Emiliano Rigoni who has made the biggest impact for them in the Europa League, becoming the top scorer in the group stages of the competition.

Rigoni has struggled in the Russian Premier Liga this season, failing to score or assist a single goal in eight matches. However, it is the complete opposite for the right winger in Europe as he has scored or assisted in all six group games. This impressive return got him a total of six goals and two assists, putting him on top of the scoring charts ahead of Andre Silva and Junior Moraes on assists.

The best game he’s had for Zenit this season definitely came in the home match against Rosenborg BK. He scored all of their goals in a 3-1 win, taking the match ball home with him. The Argentinian’s first goal came from a header, he just about got enough on the strike for his second to lob Andre Hansen despite the Rosenborg goalkeeper getting a hand to it, before capitalising on an under-hit back pass to complete his hat-trick.

This isn’t the only game in which Emiliano Rigoni has been the difference for Zenit though. In their penultimate group match they faced off against Vardar, who hadn’t earned a point in the group at that stage. Dmitri Poloz had opened the scoring for Zenit with a powerful volley, Artem Dzubya then had the chance to double the lead from the penalty spot but failed to convert his kick. Then Rigoni took over and opened up a two-goal lead in the 43rd minute when he ran down the right wing, cut in onto his favoured left foot and emphatically curled the ball into the top far corner. Zenit were cruising at this point, but Rigoni’s strike turned out to be vital in sparing Zenit’s blushes, as Dejan Blazevski scored for Vardar in the dying moments, with the final score being 2-1.

Rigoni’s ability to perform on the European stage is made more significant by the fact that this is his first ever campaign outside of his native Argentina. Rigoni’s career started with Belgrano de Cordoba, coming on for the last 20 minutes of a 3-0 loss against CA Lanus to make his debut in the 2013/14 season at the age of 20. In his breakthrough season he made a total of 26 appearances, scoring just one goal, although when it did come it was massive. Belgrano had gone 1-0 down against Argentinian powerhouse Boca Juniors before Rigoni latched onto a through ball, held off the defender and fired the ball into the roof of the net, getting Celestes on their way to a 3-2 victory.

He spent a total of three years in Belgrano’s first team, clocking up 74 matches, eight goals and six assists before moving onto CA Independiente de Avellaneda in January 2016. He only stayed with Los Diablos Rojos for a year and a half but had a very impressive record, playing 50 matches, scoring 16 times and assisting seven. One of those goals came on his debut, as he got on the end of a low cross and turned it into the far corner to bag the only goal in a 1-0 win against his old side Belgrano.

His knack of scoring key goals in continental competitions came through while he was at Independiente. He played seven times across two Copa Sudamericana campaigns for the team, scoring twice. The first of these came in a 2-0 win over Lanus, the team that he lost against in his Belgrano debut. It was Rigoni’s cross which led to Leandro Miguel Fernandez’s opening goal and he then capitalised on an under-hit header back to Lanus stopper Fernando Monetti to add the second, delightfully dinking it over the keeper who was subsequently caught in no man’s land. In the following leg they were beaten on penalties by Chapecoense.

The following year he scored the only goal in a two-legged first round tie against Alianza Lima, finishing off a brilliant team move to put his side into the next round. Independiente may have eventually been knocked out, but Rigoni’s form in this cup, as well as in the league earned him his move to Russia, with a deal worth around €9 million being agreed between Independiente and Zenit St Petersburg.

The decision to leave his homeland has paid dividends for the winger, as since joining Zenit he has got himself into Argentina national team head coach Jorge Sampaoli’s thoughts just in time for the 2018 World Cup. Rigoni made his national team debut as he came on for the second half of the World Cup Qualifying game against Peru which was drawn 0-0. Many felt that after this match Argentina had no chance of going to Russia, but a master class from Lionel Messi in which he scored a hat-trick in a 3-1 win against Ecuador in the final qualifying game was enough to get Argentina through, though Rigoni could only watch on from the bench. His only other appearance to date is a 14-minute cameo in a 4-2 friendly defeat at the hands of Nigeria.

Emiliano Rigoni may only be in his first season of European football, but he is already making his mark. After helping Zenit to impressively top their group ahead of Real Sociedad he will now face Celtic in the Round of 32. While his main focus will be on helping his side to progress in the Europa League, if he is able to continue his form in Europe and begin to translate that into his play in the league, then the winger could be among the likes of Sergio Aguero, Paulo Dybala and Lionel Messi as one of the attacking talents representing Argentina at the World Cup. This is a massive campaign for Emiliano Rigoni and one in which he is beginning to truly announce himself to the world, with the Europa League being central to that.