It’s here – the biggest football carnival of them all. Billions round the world will be watching the drama unfold during the 2014 FIFA World Cup Brazil. But here in England which place is proudest about the role they’ve played in England’s adventure? 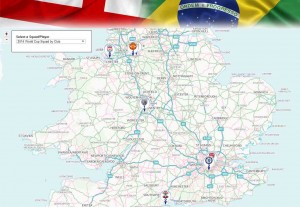 Which part of the country has created the strike power in the team or the midfield dynamos, or the “shall not pass” defenders and keepers?

Where were they born, which clubs nurtured them on their way to stardom and whose club shirt do they wear right now?

Ask the question, see the answer. All the information is now displayed on a unique interactive map.

The full ‘66 squad are on it too so you can compare how footballing skill and club dominance have shifted over the decades since England’s one glorious World Cup success.

The only thing we can’t plot now are the England scores!