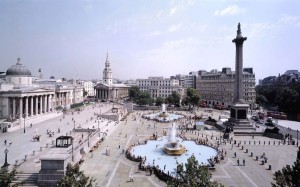 To kick the 2014 World Cup off, Morphsuits took football to the streets of London and flashmobbed Trafalgar Square, to predict the final score of the first of England’s matches, against Italy on Saturday 14th June.

The Morphsuit cladded entourage of English and Italian players took over the square , weaving in and out of tantalised spectators, disputing offside calls, red cards and extra time for full fanatic glory, the group of footy fans showed England’s capital how to take the party to the streets and celebrate The World Cup just days before the main event.

The Italian and English teams ran on with goal posts and took onlookers by surprise as they quickly assembled in between the fountains to kick off the match. Patriotic supporters congregated at the sidelines and kicked the ball back in to play when it went off side (outside the fountains!).

Thousands upon thousands of patriotic football fans will be proudly showing their colours to represent their home countries for the 2014 Word Cup and we cannot wait!