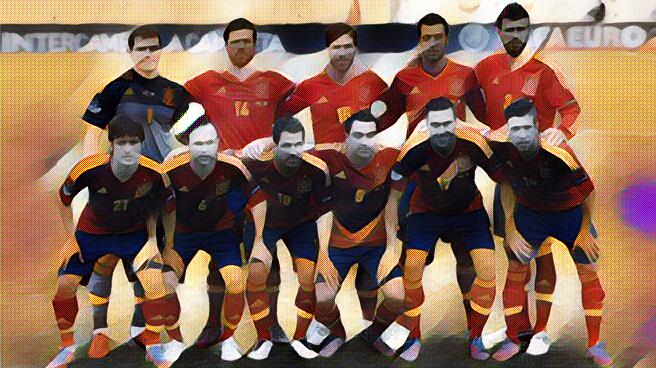 Spain’s triumph at Euro 2012 was significant in more ways than one. It was the third major European trophy in a row, after victory at Euro 2008, then a first World Cup in 2010. The trio of trophies signified an era of Spanish domination, playing irresistible, scintillating football, and widely considered one of the finest national sides in history. However, Euro 2012 is also synonymous with a change in Spanish fortunes, with a period of transition and a faded philosophy meaning 2012 was the last tournament Spain have come close to winning.

Spain arrived at Euro 2012 boasting a side containing a perfect mix of players who were in the trophy winning teams of 2008 and 2010, as well as up-and-coming players which would go on to become household names today. Seven players featured in all three finals either in the starting eleven or as substitute: Iker Casillas, Sergio Ramos, Xavi, Cesc Fabregas, David Silva, Andres Iniesta and Fernando Torres.

After multiple lost finals, the worry about Spain not possessing a winning mentality as a team was blown away in 2008 when ‘tiki-taka’ football shook the world, debuting first for Barcelona before the philosophy was transferred on to the national team.

The use of predominantly small players, especially in midfield, gave the Spain team unparalleled agility and speed of play, dominating the ball, demoralising teams before unpicking defences with pin-point passing plays.

Spain started Euro 2012 in the same group as Italy, who they would go on to face in the final, drawing with them 1-1 in the group stage. With victories over Croatia and the Republic of Ireland, Spain finished the group top on seven points.

After sweeping France aside 2-0, they then struggled against neighbours Portugal in the semis, beating them 4-2 on penalties after the match ended goalless. A super save from Casillas and Bruno Alves smashing the fourth penalty against the bar meant that Portugal were knocked out before Cristiano could take the fifth penalty.

This lead to some controversy as to why Ronaldo did not take one of the earlier penalties, probably because the fifth penalty is usually the last, meaning that Ronaldo in theory could be the ‘match-winner’. Obviously.

Italy also had to go through penalties to reach the final, facing England in the quarter finals. England inevitably lost, with Pirlo producing a beautiful Panenka penalty to beat Joe Hart. They then put in an impressive, industrious performance to beat Germany 2-1 in the semis.

In many ways, Italy overachieved by even reaching the final, many did not give them a hope of even arriving at that stage. This was mostly due to them being a side in transition, focusing instead on preparing on the 2014 World Cup, how well that turned out.

In the final, hosted in Kiev, Spain fielded a side which consisted of a mix of youth and the previously mentioned players who had experience in winning finals. Italy too fielded a strong side on paper, featuring the likes of Gianluigi Buffon, the famous defence of Leonardo Bonucci, Giorgio Chiellini and Andrea Barzagli, as well as Andrea Pirlo, who was the tournament’s star player.

In reality, there was a gulf in class between the two teams. Spain, as expected, dominated possession, with Chiellini forced off with a niggling injury after 20 minutes. David Silva opened the scoring after 14 minutes, heading in from six yards. Italy tried to force their way back into the game with Antonio Cassano and Antonio Di Natale creating a few chances.

Just before half time though, a young Jordi Alba announced his presence to the world with a long run up the left wing, exchanges passes with Xavi before finishing past Buffon, a type of goal which would become synonymous with his play today.

By the second half the contest was over, with half an hour to go Thiago Motta picked up a hamstring injury, and with all three substitutes used, Italy were reduced to ten men. Spain dominated even more so from then on, with substitute Torres and Juan Mata grabbing late goals to cap off a 4-0 demolishing of the overachieving Italian side.

After the game, many pundits came to the conclusion that the performance alone justified that Spain team to be one of the best in history, rivalling that of the 1970 Brazil side led by Pele. There is little to argue against the claim, with the four-year spell not only delivering the country their first World Cup, but the most successful period by far in their history.

It was also a turning point for the team, signifying the end to Spain’s cycle of unchallenged dominance. With key players such as Carles Puyol, Xavi and Iker Casillas either retiring or declining with age, Spain struggled to impose the same philosophy on the next generation and so, stuck with aging players.

Finally though, the next generation has well and truly stepped up. With more mercurial talents in the team with the likes of Isco and Alvaro Morata, Spain now have a Plan B as well as a recognised striker for the first time in years. Looking to next year then, it would be wise to punt a bet on Spain being the ones to end the current, German period of dominance.