It’s May 7th, 2017; a sunny day in Amsterdam saw a young Ajax squad dismantle Go Ahead Eagles by a score of 4 to 0. The side played some great flowing football to keep themselves in the title race, made even more special by the fact that 9 featuring players were of the age of 21 or younger. Ajax have been setting an example of youth development all season; it’s just now that people are starting to talk.

Peter Bosz, Ajax head coach, isn’t worried about the noise. “We were a little complacent out there. I feel we’re capable of much better.” The recently-appointed manager echoes the attitude of the club as a whole, of the expectations of the fans. Bosz’s side have transformed into a shadow of the Dutch giant’s former world-beating self: high-pressing, attacking, entertaining. They’ve since conceded the league title to rivals Feyenoord, but a match-up with Manchester United in the Europa League final beckons. The path to possible continental glory was, however, not as straightforward as you’d be led to believe.

After skimming by Greek side PAOK in the Champions League 3rd round qualification tie, Ajax simply needed to beat Russian team Rostov: Eastern Europe’s version of Leicester City. A draw in Amsterdam was followed by a dismantling in Rostov, 4-1 to the Russians. Amsterdam’s beloved side were outclassed, not only on the score line but also stylistically. This wasn’t the Ajax we’ve come to love. This was something different; a boring, run-through-the-motions, average Dutch squad.

The severe loss prompted two things: a “relegation” of sorts to the Europa League group stage and also one of the biggest transfers in club history. Financially-stricken Dutch club Twente sold star playmaker Hakim Ziyech to Ajax less than a week later for €11 million. Ziyech’s spark, along with the emergence of Danish star striker Kasper Dolberg, recently-arrived defender Davinson Sánchez, and countless other rising stars turned what seemed to be a doomed European campaign into one of Ajax’s best seasons in recent memory.

An undefeated 6-match group stage saw Ajax progress through to the Europa League knockout rounds, where Polish giants Legia Warsaw greeted them. By this point, experienced midfielder Lasse Schøne had solidified his spot as a deep-lying regista playmaker, goalkeeper Andre Onana was becoming a household name (‘Onana, what’s his name?’ has become so overused), and the beautiful attacking displays put on by the likes of German winger Amin Younes, Dolberg, and young star Justin Kluivert were a thing to behold. That being said, an aggregate 1-0 win over Legia wasn’t quite the enthralling spectacle we’d come to expect from Ajax.

In the last 16 round, Ajax met Danish stalwarts København. Losing 2-1 in the first away leg could’ve spelt trouble for the Dutchmen, but Peter Bosz’s side rebounded with a convincing 2-0 win at home to progress. The next opponents, Schalke 04 of Germany, looked like a big challenge but a 2-0 home win dispelled any doubts about Ajax’s talent. The second leg was, either unfortunately or fortunately, anything but straight forward.

Two goals in 3 minutes early in the second half saw Schalke draw level on aggregate, which eventually forced extra-time. In the 101st minute, future Arsenal defender Sead Kolasinac sent in a cross that met the head of Daniel Caligiuri, before meeting the back of the net. This was an utter capitulation; not since the Rostov game had fans seen such a poor performance. But with less than 10 minutes remaining, the smallest bit of hope found a way to shine. A hopeful Kenny Tete cross was miscontrolled by Nick Viergever, but the clearance ricocheted off of his boot and into the goal. Ajax, remarkably, were leading on away goals, and Younes’s late goal sealed the trip to the semi-finals.

In what was one of the best performances all season, Ajax dismantled Olympique Lyon in the first leg 4-1. Bertrand Traoré’s two goals shone above his lackluster loan spell from Chelsea, and the Amsterdammers were all-but through to the final. Once again, a near-capitulation awaited Ajax in the second leg, but the young squad squeezed through in France 3-1 (5-4 on aggregate). Ajax were through to the final, and confirmation of a matchup with Manchester United proved just how big of an occasion it is for the club.

Taking a look at the probable Ajax squad for Wednesday, it is clear to see why many believe their inexperience won’t be a match against United’s strength and skill. Here’s my predicted Ajax lineup for the Europa League Final: 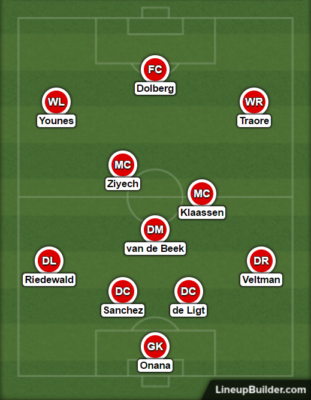 The only real toss-ups here are right-back, defensive midfield, and right-wing. Joël Veltman has been the main right-back this year after his conversion from centre-half, but Kenny Tete performed well in the first leg against Lyon when Veltman was suspended. Veltman offers more support going forward, but Tete is a more solid defender. While Lasse Schøne has been a revelation as a deep-lying playmaker in the holding position, Donny van de Beek has consistently performed well off the bench and starting when Lasse is absent. He’s more athletic, more defensively capable, but doesn’t offer the experience that the 30-year-old Schøne does. Finally, Traoré has received mixed reactions from Ajax fans. Many people think his goalscoring prowess earns him a spot in the lineup, but others (including me) think he’s an uncreative, inconsistent waste of money. Someone like David Neres or Justin Kluivert would offer much more spark on the wing, but it is more than likely that Bosz will stick with him and substitute him later.

Would this season be a success if Ajax lose to Manchester United? Yes. So many young players have grown into first-teamers this year and, despite losing the title race by 1 point to arch-rivals Feyenoord, the performances have been very strong across the board. In Bosz’s first season at the club, he’s completely rewired the mentality from drab, boring football to exciting, high-tempo, Cruijff-esque Ajax football. Ajax are back on the map. But that’s no excuse to go and lose against United. I believe that the skill, intelligence, youthful play, and pride of the Ajax players gives them more than a chance to go out and pull off an upset in Stockholm. As they say, only time will tell.