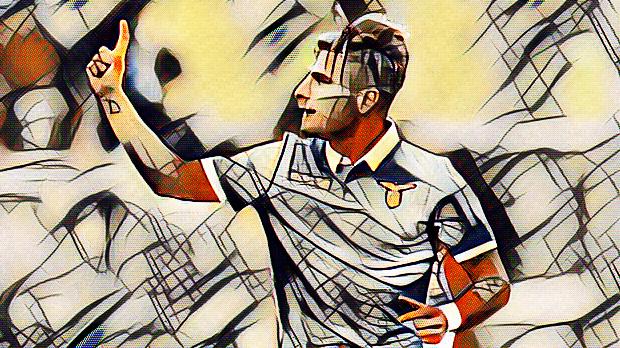 Lazio is a club with a rich history when it comes to attacking talents. In recent years they’ve had the likes of Pavel Nedved and Miroslav Klose to look to in times of need. Now that man is Ciro Immobile. With Balde Keita and Lucas Biglia having joined AS Monaco and AC Milan respectively, the Italian holds even more importance in the side. However, he has already shown that he can perform in vital games for I Biancocelesti this season.

In his first game of the campaign, the Supercoppa Italiana, he scored two goals against the giants Juventus as Lazio won the match 3-2 to lift the trophy. He has followed that up well in Serie A, either scoring or assisting in every match except the 0-0 draw against SPAL. His overall total after five games is six goals and two assists, which makes for great reading, especially as the three games he has scored in were won on the back of those strikes.

His standout performance in the league has to be the 4-1 win against AC Milan, in which he scored a hat trick and assisted the other. He got the first from the penalty spot, the second with a superb volley, before coolly finishing his hat trick with a true poacher’s goal. When the variety of goals against a defensive line that includes Leonardo Bonucci, Gianluigi Donnarumma and Mateo Musacchio is considered, this shows that the Italian striker is a real force to be reckoned with for anybody in Serie A or the Europa League.

He also showed this in Lazio’s first Europa League match of the season, a 3-2 win against Vitesse Arnhem. Immobile hadn’t started the game and came on one minute after halftime with his side 1-0 down. Marco Parolo scored a volley just five minutes after Immobile’s arrival, as he capitalised on panicky defending from the Dutch side. Vitesse had then retaken the lead before Immobile brought it back level with a clinical side-footed effort which nestled nicely into the bottom corner. The forward proceeded to provide the pass which set up Allesandro Murgia’s winner with a quarter of an hour on the clock.

Last season he managed to notch up 26 goals in 41 matches across all competitions and with the start he has had to this campaign, it would take a brave man to bet against him emulating that total. However, before reaching Rome, the Italian had varying levels of individual achievement throughout his career. Asides from Lazio the two main periods of personal success he’s had were at Pescara and Torino. He joined the first of those teams on loan in 2011-12, with the club in Serie B. The Italian scored 28 goals in 37 league matches which would eventually help them to go on to win the title and promotion to Serie A. The first time he really showed what he can do in the top league was in 2013-14, the one season he was at Torino on a permanent basis. He bagged 22 league goals in 33 matches, which earned him the Serie A top scorer award with his team finishing seventh in the table.

However, immobile really struggled in the two years between that brilliant season and his arrival at Lazio. He moved to Borussia Dortmund in the summer of 2014, going on to play 24 league games, scoring just four goals. He was then loaned out to Sevilla and Torino in the 2015-16 season, getting 22 combined league starts with a return of just seven goals. Although one positive to be taken was that he scored four Champions League goals for Dortmund, bagging at home to Arsenal and Galatasaray as well as both matches against Anderlecht. He also won the DFL-Supercup at Dortmund, although he only played one game in that competition.

Immobile has 26 Italy caps to his name and seven goals, but with six of those strikes coming after he joined Lazio, that could be a clear indication of how much he has kicked on since moving to I Biancocelesti.

The striker is definitely a big threat and despite having plenty of tough periods throughout his career, he has performed on the biggest stages and is in the middle of what is possibly the best form of his playing career to date. With another tie against Vitesse Arnhem to go, as well as home and away matches against Nice and Zulte Waregem, Ciro Immobile will be looking to ensure his Lazio side makes it through to the knockout stages and beyond. Immobile has been underestimated or even written off many times in the past. However, the Italian is one of the most dangerous and important players in the Europa League this year.