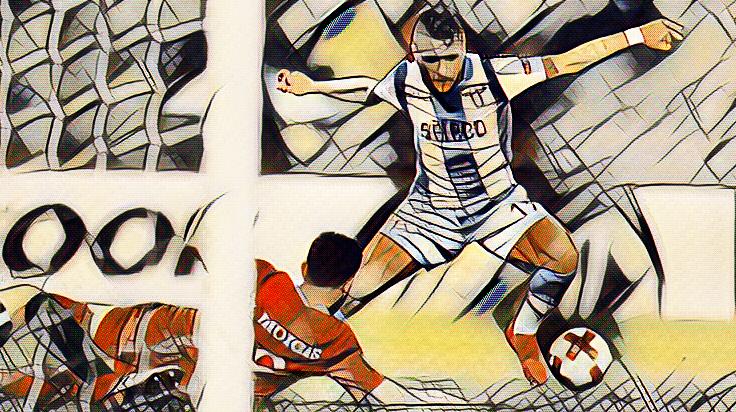 With a place in the Round of 16 at stake there was plenty of action, with Lazio and Zenit St Petersburg overturning deficits from the first leg to progress. Arsenal, Athletic Bilbao and Borussia Dortmund were close to forfeiting their place in the next round, but just about managed to hang on.

Lazio had rested Ciro Immobile during the first leg of this tie, but they brought him back for this fixture and it certainly paid off. It was the talismanic Italian who opened the scoring with a well taken volley, before Bastos headed I Biancocelesti in front. Immobile then got his second of the game when he got on the end of a pass from Felipe Anderson, who proceeded to get a goal of his own when he dribbled the ball to the edge of the box and sent it into the bottom corner. Following this it was once again Immobile who added to FCSB’s troubles, as he fooled goalkeeper Daniel Vlad and defender Junior Morais with a dummy, before tapping the ball into the net to get his hat trick and Lazio’s fifth goal of the game. Harlem-Eddy Gnohere then got a fortunate goal as his strike bounced off Thomas Strakosha, back onto the striker and in. However, this didn’t make much of a difference as Lazio went through comfortably and will now face Dynamo Kyiv in the next round.

Borussia Dortmund had to come back from behind in the first leg and had to do the same again in the second. This came after Rafael Toloi bundled the ball home when Roman Burki failed to deal with a corner early in the game. It looked as though Dortmund were going to be out of the competition on away goals, but Marcel Schmelzer pounced to tuck the ball away in the 83rd minute after Etrit Berisha failed to keep hold of Marco Reus’ effort. Dortmund hung on after this and will now be facing RB Salzburg in the next round. However, this game has been overshadowed by the racist abuse that Michy Batshuayi had to face during the match, with the star who is on loan from Chelsea confirming this on his official Twitter account after the match.

Celtic went into this game with a 1-0 advantage, however just eight minutes into the second leg it was wiped out by a powerful header from Branislav Ivanovic. Within half an hour they found themselves behind on aggregate when Dorus de Vries was unable to deal with Daler Kuzyayev’s long range strike. Ivanovic was involved in another goal on the hour mark, but this time he was the creator when his ball into the box found Aleksandr Kokorin who managed to stab the ball home. Following their victory Zenit will be facing RB Leipzig in the next round.

With Lorenzo Insigne and Dries Mertens back in Napoli’s line up they were a different beast in attack. It was Insigne’s strike which led to Napoli’s first goal, as Peter Gulacsi was unable to keep hold of it and Piotr Zielinski turned the ball in with the rebound. The Italian then scored a goal of his own in the 86th minute to give Napoli a chance, but they were unable to get another and were knocked out on away goals.

Having come back from 2-0 down in the first leg, Lokomotiv Moscow only needed a draw to progress to the Europa League Round of 16 for the first time in their history.  Igor Denisov’s volley was the only goal in the second leg, as the Russian side went on to victory. They didn’t get a lot of luck in the draw though, as they will play Atletico Madrid.

Arsenal were looking very comfortable coming into this game following their 3-0 win last week. However, they capitulated just as quickly as Ostersund had in the first leg, ensuring that things stayed interesting. In the 22nd minute Hosam Aiesh’s strike deflected in off of Calum Chambers. Just a minute later Ken Sema got past the Englishman with a great piece of skill before firing the ball past David Ospina at the far post. However, Sead Kolasinac punished Ronald Mukiibi when the defender was unable to deal with Hector Bellerin’s cross to give Arsenal a bit of breathing space. The Gunners will now face AC Milan in the next round, in what is considered the biggest match of the Round of 16.

Having set up Takumi Minamino’s 94th minute equaliser in the first leg, Stefan Lainer assisted Munas Dabbur with a low cross, to put Salzburg ahead after 10 minutes in the second. Just before the half hour mark Real Sociedad centre back Raul Navas equalised with a brilliant header. However, the defender was sent off in the 71st minute for a second yellow card. Three minutes later Salzburg were awarded a penalty, which Valon Berisha converted, though Geronimo Rulli will have been disappointed to not keep it out.

Antoine Griezmann was among the players rested in this game, following Atleti’s demolition of Copenhagen in the first leg. Though Kevin Gameiro was among the players to start again and he started the game off with a bang. Seven minutes in he got the ball outside the box and sent it flying into the top corner. This turned out to be the only goal of the game, with Jan Oblak and Stephan Andersen both making some brilliant saves.

This was supposed to be one of the tightest match ups in the Round of 32, but it hasn’t turned out like that. The competition was all but over when Lyon won 3-1 in the first leg and they were relatively comfortable throughout this game. In the 85th minute Nabil Fekir ran through and squared the ball across to Bertrand Traore who walked the ball into the goal, helping to assert the French side’s dominance. Lyon will face CSKA Moscow in the next round.

Athletic Bilbao had been very convincing in the first leg, but Spartak Moscow gave them a big scare in the second. Luiz Adriano scored the first of the game at the very end of the first half to give Moscow a chance. Xabier Etxeita then headed home to give Bilbao some breathing space. Lorenzo Melgarejo then scored in the 85th minute to keep things interesting, though Moscow were unable to find an equaliser. Athletic Bilbao will face Marseille in the next round.

It was always clear that FC Astana had a difficult task going into this game, but after an hour it was near impossible. Sporting Lisbon had scored three times, including a screamer from Bruno Fernandes, which put the game firmly out of Astana’s reach despite a goal from Marin Tomasov. Late goals from Patrick Twumasi and Dmitri Shomko may not have impacted the aggregate result, but they did give Astana a draw on the night and ensure they left the tie with their heads held high.

AC Milan were always going to be comfortable in this game, having won the first leg 3-0. They left big names such as Gianluigi Donnarumma out of the starting line up. However, they did include the in form forward Patrick Cutrone who set up Fabio Borini for the game’s only goal.

Marseille put this tie beyond any reasonable doubt in the first leg. Ricardo Horta volleyed in well just after the half an hour mark to give Braga the win in the second leg, but they never threatened to overturn their three goal deficit.

Alan Dzagoev’s goal seconds before the stroke of half time was enough to see CSKA Moscow squeeze through to the Round of 16. Red Star Belgrade had been incredibly resolute throughout the two legs, but were unable to cause any real threat to Igor Akinfeev’s goal and ultimately paid the price.

After their draw in the first leg it was all to play for in the second leg between Viktoria Plzen and Partizan Belgrade. It was Michael Krmencik who opened the scoring just after the hour mark, before Ales Cermak came off the bench to put the win past any doubt in the dying moments.

AEK Athens haven’t lost a single match in the Europa League this season, but have still been knocked out of the competition. They drew 1-1 at home last week and have been knocked out after a goalless game due to the away goals rule.