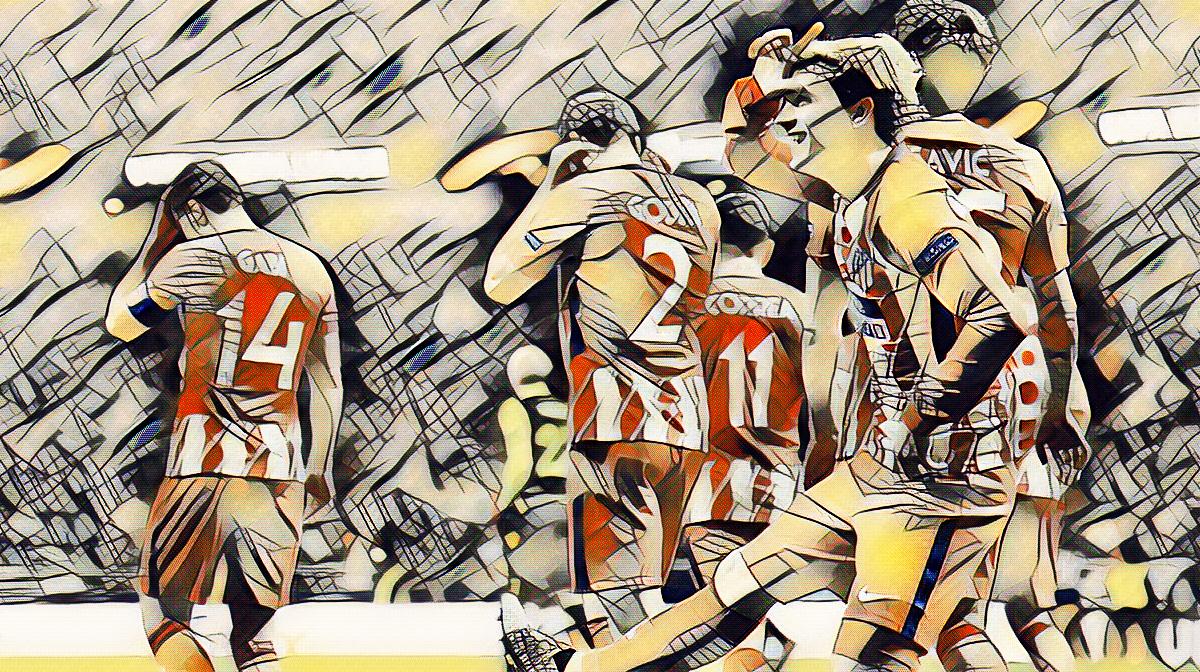 The quarterfinals have started in decisive fashion, with three teams now having a large task on their hands to qualify following the first leg result. There were some fourteen goals across the four games including brilliant strikes and defensive mishaps.

When a team is playing the favourites to win any competition, the last thing they want to do is gift them a goal, especially not early on. That is exactly what Sporting did in this case. With Atletico pressing high from the off, Antoine Griezmann had cut off a pass to Rui Patricio for Sebastian Coates. The Uruguayan defender attempted to square it across to his centre-back partner Jeremy Mathieu. However, Diego Costa nipped in to get the ball, before playing it through to Koke who placed it just past Patricio’s fingertips and into the bottom corner. Atletico were 1-0 up after just 23 seconds. Another mistake gifted Atleti their second of the game before halftime. Mathieu miscontrolled the ball, knocking into Griezman’s path. The French forward raced through and slotted it into the bottom corner. Fredy Montero had the best of Sporting’s chances in the dying moments, as the ball fell to him inside the six-yard box, but he blazed it over the bar, meaning that Atletico have a two goal lead to take to Sporting’s Estadio Jose Alvalade.

After seven minutes Aaron Ramsey had the ball in the net for Arsenal, but it was ruled out for offside. However, less than two minutes later the Welshman opened the scoring as he got on the end of a low cross from Hector Bellerin and sent it just out of Igor Akinfeev’s reach. CSKA equalised before the quarter of an hour mark, as a trio of Arsenal defensive errors eventually led to a free kick on the edge of the box, which Aleksandr Golovin sent into the top corner, giving Petr Cech no chance. They weren’t back on level terms for long though, as Georgi Schennikov brought Mesut Ozil down in the box on 23 minutes, leading to a penalty, which Alexandre Lacazette slotted away with ease, as he sent the keeper the wrong way. The best goal of the game came just five minutes later, as an inch-perfect ball from Ozil was outrageously flicked over Akinfeev’s head by the outside of Ramsey’s right boot. Arsenal then got their fourth goal of the game in the 35th minute, as Ozil put a cross into Lacazette who took one touch to control it and another to send it flying into the bottom corner. The second half didn’t bring anymore goals, though Ramsey came very close to getting his hat-trick. Arsenal may feel that they should have added to their total, but with a three-goal cushion to take to Moscow, they will feel confident that they will progress to the semi-finals.

Lazio started this game off quickly, as Dusan Basta played the ball into the box in the eighth minute, with Senad Lulic converting for the first goal of the game. Basta had been vital to the first goal and he was also involved in the game’s second, but for a negative reason, as he fouled Munas Dabbur in the box, giving away a penalty which Valon Berisha converted to equalise. Just after halftime Lazio got themselves back in front, as Marco Parolo produced a deft flick to guide Luis Alberto’s ball into the bottom corner. However, less than a minute after coming on Takumi Minamino scored to get Salzburg back on level terms. Felipe Anderson had also been brought on as a substitute and he made an impact of his own, as he ran through Salzburg’s defence and slotted the ball past Alexander Walke to get Lazio back in front. His teammate Immobile has been one of the best strikers in Europe this season, so it was almost inevitable that the Italian would get on the score sheet. He did so in the 75th minute to complete the scoring, placing the ball through Walke’s legs, before running off to celebrate with his manager, Simone Inzaghi. Salzburg’s two away goals could prove to be vital in the overall outcome of the tie, but Lazio will be very happy with the two-goal cushion they will take to Austria.

It took a while for this game to kick into gear, but RB Leipzig were very quick to take their opportunity. Just before halftime Peter Gulacsi made two saves from powerful volleys, the ball then made its way to Emil Forsberg who burst forward and played the ball through to Timo Werner. Leipzig’s German forward then cut inside Boubacar Kamara and powered the ball into the net. Steve Mandanda was not available for Marseille and his replacement, Yohann Pele will be disappointed with his involvement in the goal, as the ball went under his body. Marcos Ocampos almost equalised for Marseille towards the end of the match, but Gulacsi managed to tip his effort past the post, ensuring that Leipzig take a slender lead into the second leg at the Stade Velodrome.