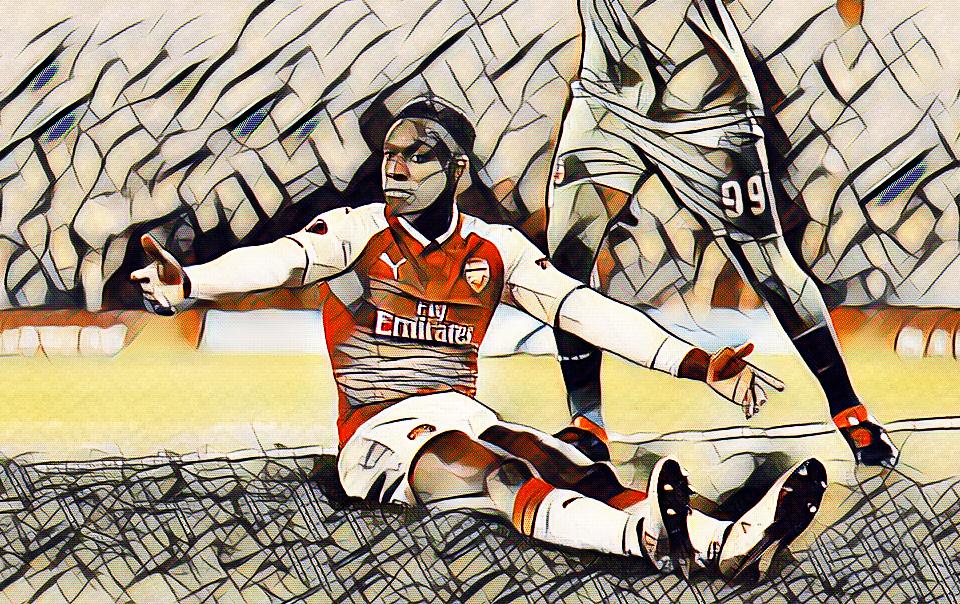 The latest round of fixtures brought controversy, comebacks and heartbreak for one side who fought back incredibly well after losing in the first leg, only to be defeated in extra time. With a place in the quarter finals up for grabs, there was a lot at stake for the teams involved, you can read about all the action here.

The Gunners went into the second leg with a two goal advantage, but may have been concerned that they would let it slip when Laurent Koscielny was forced off early on, due to injury. Any fears will have heightened when Hakan Calhanoglu fired a swerving effort past David Ospina from range in the 35th minute. However, Arsenal were given a gift to help settle their nerves, as Danny Welbeck clearly dived in the box, directly infront of the official behind the goal, but was given a penalty anyway, converting it himself as he sent Gianluigi Donnarumma the wrong way. Arsenal then kicked on from this controversial moment, as Granit Xhaka fired in from range, as the ball hit Donnarumma and spun off his hands and into the far corner, before Welbeck finished off the scoring with a header. Arsenal will now face CSKA Moscow in the quarter final.

Having been defeated 2-0 in the first leg, not too many were expecting a lot from Viktoria Plzen. However, they opened the scoring for the second leg after just six minutes, as their captain, Marek Bakos headed in a deep cross from Jan Kovarik at the far post. Just after the hour mark Bakos added another one to bring the tie level, as he smashed in the ball that Milan Havel had cut back to him. Bas Dost had the chance to win the tie for Sporting in the 92nd minute, when the Portuguese side were awarded a penalty, but he failed to convert, meaning that with the score at 2-2 on aggregate, the tie went into extra time. With the way the game had gone, Plzen would have been confident going into the added period of play, however their hopes of getting through took a cruel hit. With one and a half minutes gone of injury time, after just one had been signalled, Sporting were awarded a corner, which Bruno Fernandes hit towards the front post, where Rodrigo Battaglia rose highest and headed it across the goal into the top corner, out of Ales Hruska’s reach. It was this goal that proved to make the difference, as Plzen were eliminated from the competition. Sporting will now face Atletico Madrid in the next round.

When it was announced that Borussia Dortmund would be facing Salzburg in this tie, many expected it to be the Germans going through. However, having won in the first leg, Salzburg were hardly troubled at home in the second. They could have easily added a goal to their tally, with Xaver Shlager forcing the best out of Roman Burki and Moanes Dabour hitting the bar late on. Two efforts from Alexander Isak were the closest Dortmund got to scoring, but the first was convincingly saved by Alexander Walke and the other was blocked on the line by Duje Caleta-Car. This result makes RB Salzburg the first ever Austrian side to reach the quarter finals of the Europa League, as they face Lazio in the next round.

Lyon went into this second leg with a one goal lead, but Aleksandr Golovin’s strike into the top corner, which came five minutes before half time evened the game up. Lyon then equalised in the 58th minute, as Jordan Ferri ran down the right hand side, before squaring the ball to Maxwell Cornet who then put it past Igor Akinfeev. Replays showed that the ball had gone out of play before Ferri had pulled it back to his team mate, but the goal still stood. It took CSKA just two minutes to get back into the lead, as Kirill Nababkin found some space on the right, before firing in a low cross which Ahmed Musa turned into the net. Their lead was then enhanced when Pontus Wernbloom fired Konstantin Kuchaev’s ball in past Anthony Lopes, for CSKA’s second goal in five minutes. Marcelo Diaz managed to equal the aggregate score for Lyon, when he volleyed Bertrand Traore’s cross in first time, however they were unable to add another, meaning that CSKA went through on away goals. There were boos at the end of the game from the home fans; with the final being played in Lyon, they would have been desperate to get there, but have instead been knocked out in frustrating circumstances.

Before this tie, Zenit St Petersburg had not been beaten in eighteen home Europa League games. However, just avoiding defeat wasn’t enough this time with Leipzig going into the second leg with a goal advantage. The first goal came as Timo Werner danced through Zenit’s defence and got the ball to Jean-Kevin Augustin, who swivelled and shot past Andrey Lunev to make life even more difficult for Zenit. Moments before half time Sebastian Driussi managed to get on the end of Domenico Criscito’s cross, to get back level on the day. With less than 10 minutes remaining Werner was brought down for a penalty, but his effort was saved to keep it at 1-1 on the night. Despite this, while Zenit keep hold of their unbeaten streak, it is Leipzig who are going through to the quarter final, where they will face Marseille.

Ciro Immobile and Felipe Anderson have been ruthless infront of goal in the Europa League this season. However, this time around it wasn’t one of their attacking duo who scored, as their two goals came from more unlikely sources. It was Lucas Leiva who opened the scoring when he got on the end of Luis Alberto’s corner. Lazio had to wait until the 83rd minute for their second of the game, as Stefan de Vrij scored courtesy of another corner. Having drawn away from home, Dyanmo Kyiv will be frustrated about the manner in which the goal that cost them this tie were scored.

Atletico Madrid put the tie out of any reasonable doubt in the first leg, but were even more ruthless in the second. After a quarter of an hour, Angel Correa played a one-two with Koke, dribbled the ball to the edge of the box and then fired it into the bottom corner, just out of Anton Kochenkov’s reach to start the scoring for the night. Maciej Rybus scored a brilliant goal from range five minutes later for Lokomotiv, but this was as good as it would get for the Russian side. Just moments after the break Filipe Luis played the ball across to Saul Niguez who struck it into the bottom corner from the edge of the box. Following that effort, Antoine Griezmann was taken down by the goalkeeper for a penalty, which was converted by Fernando Torres, who then quickly added his second of the game five minutes later. The final goal of the tie came courtesy of a brilliant finish from Griezmann, as he looped the ball over Kochenkov and into the top corner. Having already put five past Copenhagen, Atletico Madrid have shown their dominance with another eight in the two legs against Moscow, which has helped them quickly become the favourites to become the winners of this season’s Europa League.

Athletic Bilbao’s defensive errors had cost them dearly in the first leg. This trend continued into the second, with Marseille’s first goal of the game coming from a penalty, which was won and converted by Dimitri Payet. However, there was nothing that their defence could do about the second goal of the game, as Lucas Ocampos burst down the left wing, cut inside and fired the ball just inside the far post. Inaki Williams was able to bundle in a consolation goal, however, minutes later things got worse for Bilbao, as their star man and the competition’s top scorer so far, Aritz Aduriz was sent off after receiving his second yellow of the game. The match petered out after this, with Marseille going through comfortably.