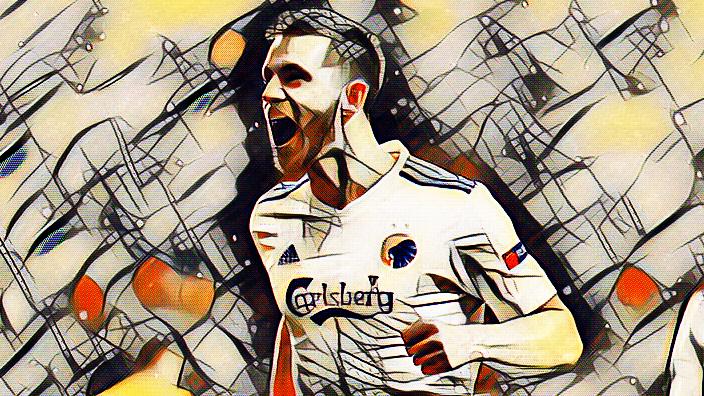 The Europa League is returning this week after a lengthy break following the culmination of the group stages. There will be an abundance of talent coming into the competition from the Champions League with the likes of Antoine Griezmann, Dries Mertens, Timo Werner and Christian Pulisic among those who will be fighting to get their hands on the Europa League trophy in Lyon on May 16th. However, there were plenty of impressive performances from players in the Europa League group stages, which is highlighted by the fact that players such as Nabil Fekir, Aleksandr Kokorin and Alejandro Gomez didn’t make it into this team despite consistently playing well in the competition. What this team does feature though is a steely defence that conceded just fourteen goals between them, as well as a combined 25 goals and 18 assists.

Copenhagen’s qualification through one of the Europa League’s closest groups was built on defensive solidity. The club didn’t get a goal in their first two games but came away with a point in each thanks in large part to the work of Olsen and his back line. Olsen played five of Copenhagen’s games keeping four clean sheets, putting him level with Real Sociedad’s Geronimo Rulli, RB Salzburg’s Alexander Walke and Red Star Belgrade’s Milan Borjan in the race for the Golden Glove, despite having played a game less than Rulli and Borjan.

Lainer was an ever-present member of the formidable RB Salzburg defence which only conceded one goal in the entirety of the group stages. Lainer made a total of 22 tackles in the six games and got two assists. The most important of those was for the only goal in a victory against Marseille as he made a marauding run to the byline before cutting the ball back to Manus Dabbur to pass into the goal. Lainer’s defensive partner Duje Caleta-Car was also very impressive throughout.

Ostersund‘s achievement of getting through to the Europa League knockout round is an incredible one when their rapid ascent is considered. Swedish international Papagiannopoulos was vital in their qualification as his 39 clearances and 10 blocks helped Ostersund to three clean sheets. In addition to that he scored Ostersund’s goal in a 1-1 draw against Hertha Berlin with a well taken finish. His next challenge in the Europa League will be to keep out Arsenal.

Olsen’ Copenhagen team mate Michael Luftner was another big reason behind the club’s impressive defensive record. The Czech Republic international also helped out at the other end bagging two goals, one of which was a powerful header in their final game against Sheriff Tiraspol to put Copenhagen’s place in the knockout rounds beyond any doubt.

Mittelstadt is the only player featured in this team who didn’t make it through to the knockout rounds. He missed Hertha Berlin’s first three fixtures and there is no coincidence that they had an upturn in results when the left back came into the side. The Germany U20 international got an assist in all three games he played in. In his first match Mittelstadt set up up Davie Selke for the opener against Zorya Luhansk in what resulted in their first and only win of the group stages.

Zenit St. Petersburg ended the group stages with the most points of any team having also scored the most goals in the Europa League and Emiliano Rigoni contributed heavily to this. He currently leads the Golden Boot race on assists, as he has six goals and two assists to his name. His best performance came in a 3-1 win against Rosenborg in which he scored all of Zenit’s goals with a header and a lob over the goalkeeper before capitalising on a defensive error to complete his hat trick.

Arsenal cruised through their group, with Jack Wilshere central to the majority of their best plays. The midfielder has been shunned by the English national team due to a lack of game time, but his form in the Europa League has been so impressive that it’s helped him in his hunt for Premier League minutes. He played in every game for the Gunners and dictated the tempo of their play. He also chipped in with two assists on top of a well taken goal against BATE Borisov.

Nobody got more assists in the Europa League group stages than Sergio Canales, who got a total of five. He assisted in all of Sociedad’s opening four matches, getting two in a 3-0 win against Vardar. There was real variety to the assists, with some coming from corners and balls in from wide, while another came from a quick one-two with Willian Jose.

With Copenhagen failing to score in their first two games and Verbic not involved in the 1-1 draw against Zlin, his place in this line up owes a lot to his brilliant form in the final three group games. He got two goals in a 3-0 win against Zlin (Copenhagen’s first victory in the groups), cut in from the wing and curled a tremendous effort into the far corner in a 2-1 loss against Lokomotiv Moscow and assisted both of Copenhagen’s goals against Sheriff Tiraspol in their final game to ensure that the Danish giants would progress to the knockout rounds. The Slovenia international was bought by Dynamo Kyiv in January for £3.6 million.

The Portuguese striker has had a tough time in Serie A this season, as have AC Milan. However, both his and the club’s fortunes have been completely different in the Europa League. Silva finished the group stages with six goals in six games -including a hat trick against Austria Wien- as Milan topped Group D, three points ahead of AEK Athens who finished second.

Junior Moraes is the last of three players to get six goals in the Europa League group stages and the Brazilian had a knack of getting very important goals for Kyiv. He came off the bench to put Dynamo ahead in their opener against Skenderbeu and against Partizan Belgrade he came off the bench with his side 2-0 down and scored twice as they went on to win 3-2. Despite this his best game came in the second meeting with Partizan Belgrade on the final day in what was a must win match. Having done enough in those first two games to prove he should start he played every minute of the last four games but hadn’t scored in three starts. He went on to set up Mykola Morozyuk for Kyiv’s opener before going on to secure a hat trick of his own to secure qualification for the Ukrainian side.